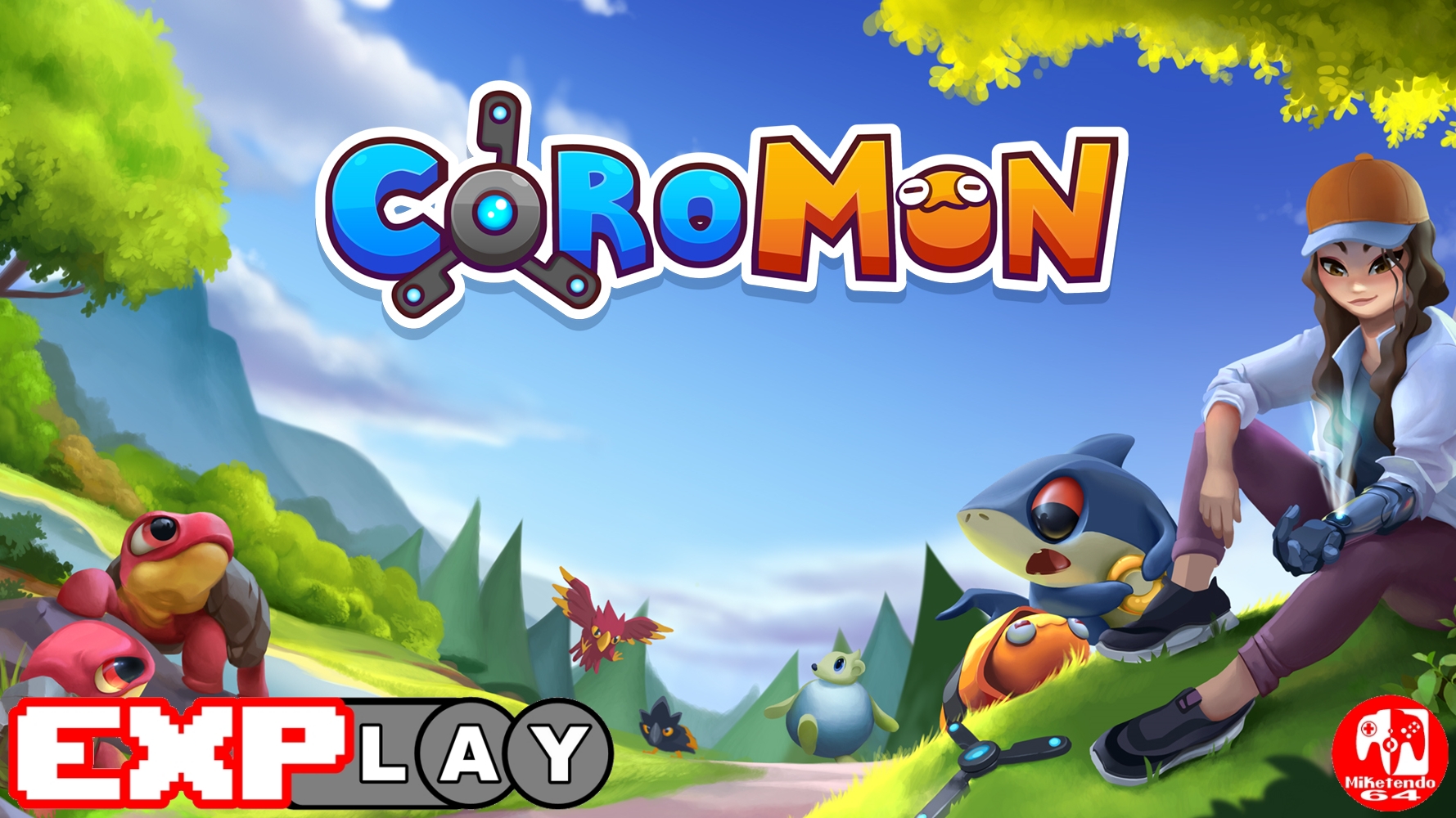 Welcome to EXPlay, (Explain & Play) the review series where we care not for scores but tell it how it is when it comes to every game we get our hands on, whilst also taking the time to include some lengthy gameplay, to give you the reader, the chance to shape your own impressions and views whilst watching and reading. In this instalment, we’re covering Coromon by developer, TRAGsoft.

Being the formidable behemoth that it is, as a franchise Pokémon has completely taken the world by storm. From card games to anime, mangas, movies and an army of video games across a multitude of platforms, Pokémon is well and truly everywhere and that’s just the officially branded stuff. Being such an inspiration concept, Pokémon has served as inspiration for plenty of monster taming games in recent years and now we can add another game to the list, Coromon.

Out now on Nintendo Switch after a lengthy delay, the time has come for an adventure that feels like something straight from an official Pokémon game. Welcome to Velua, home to a curious world, home to perplexing puzzles, varied landscapes, turn-based battles, a villainous organization that would give Team Rocket a run for their money and a ghastly threat which threatens all who call Velua home. Of course, before any of this can truly get underway, players must first go through the game’s customizable options to fabricate their ideal protagonist before being allowed to become the latest Battle Researcher to work for Lux Solis.

Now if the paragraph above has you hooked, splendid! For Coromon really is a delightful tale, which to some frustration has some pacing issues, especially nearer to the beginning of the game as it can take a while for the game’s story to properly get underway due to the required amount of grinding to level up and evolve your chosen Coromon in the first few areas of the game. Once you find your stride, however, things can get underway at a steady pace that rewards the players with a satisfying conclusion.

In terms of gameplay, for the most part, Coromon is a carbon copy of the series of games it takes inspiration from. As a Battle Researcher, players can explore the world of Velua, engage in battles against fellow researchers, encounter wild Coromon that when weakened, can be caught in Spinners and added to your team of six, or sent off to storage and replacing TMs, is a gauntlet, which, once the correct module has been added, allows players to use useful abilities.

There’s even 114 different Coromon to be caught, each with their own specific typing, thirteen in total with seven being elemental and six being skilled based. Type advantages are crucial to victory and with no dual-typing present, it does mean players need to take on a more strategic approach when it comes to their team, as a singular line-up of six will not see you emerge victorious in every battle you undertake. Instead, you will need to allow yourself to form an attachment to at least one Coromon for each type and ensure they are all levelled up where possible, to make sure the tide of battle is always in your favour.

While this can be viewed as one of the game’s few negatives, I for one like the notion the game compels players to try out at least 13 different monsters, but then it also compels them to not settle for who they catch either, as on top of the basic 114 available, there are also three types of each Coromon, thanks to those that are Standard, Potent and Perfect, with Perfect and Potent Coromon, appearing in alternate colours, comparable to shiny forms, whilst also boasting better potential for higher stats.

Where Coromon goes beyond Pokémon, is in other areas of the game’s gameplay mechanics. Made from a team of developers that share the same criticisms as Pokémon fans, they have ensured to add regular and customizable difficulty settings that can be adjusted at any time, allowing players to have their preferred adventure, be it a relaxing and very chilled outing, or a true roller-coaster ride of non-stop adrenaline-based antics, which can limit you to one new Coromon per area, and have them leave your team should they succumb to defeat in battle.

Something else that Coromon has going for it is a series of side quests that are fun to complete and a milestone system, which essentially works as in-game achievements players can accomplish, allowing them to gain XP points, level up and gain access to rewards in the form of useful items. It’s true that Coromon can sometimes feel like a simplified Pokémon game in some instances, but other times it literally looks like the Ruby and Sapphire games, but feels similar to the modern instalments, all whilst being its own humorous that endeavors to try and evolve what monster taming games could be, into what they should be and paves the way for what future instalments could become like.

My biggest issue with Coromon though, would have to be the game’s performance, as it can frequently stutter, with wait and load times taking far longer than they should do and there being various instances where gameplay feels sluggishly slow. Still, if you love your monster taming games, let’s be honest, you’ve probably already pre-ordered Pokémon Scarlet, Pokémon Violet or both and there is absolutely nothing wrong with that. I, personally, have already secured the double pack on Amazon and can’t wait to explore a brand-new region, we currently know so little about, but just because we’ve pre-ordered it, it doesn’t mean November is going to creep up on us any sooner.

Therefore, there is no better way to pass the time, than to play plenty of other games and for those of you out there who have played Pokémon Legends: Areceus to death and looking for something new, you do owe it to yourself to give Coromon a try. Just because it is slow to start and has a list of Coromon just a bit longer than Gold and Silver, Coromon is still a title deserving of player’s time.

The designs of later evolutions are highly creative, there is humor aplenty in everything worth doing and Coromon really does stand up on its own two feet rather well, easily establishing its own identity with its own added mechanics and difficulty spike that true Pokémon fans are sure to love.

What’s more, it’s reasonably priced and even if you started a playthrough on another platform, with cross-play progression supported, there is no need to start again from scratch, when you can simply pick up from where you left off and let the adventure continue.