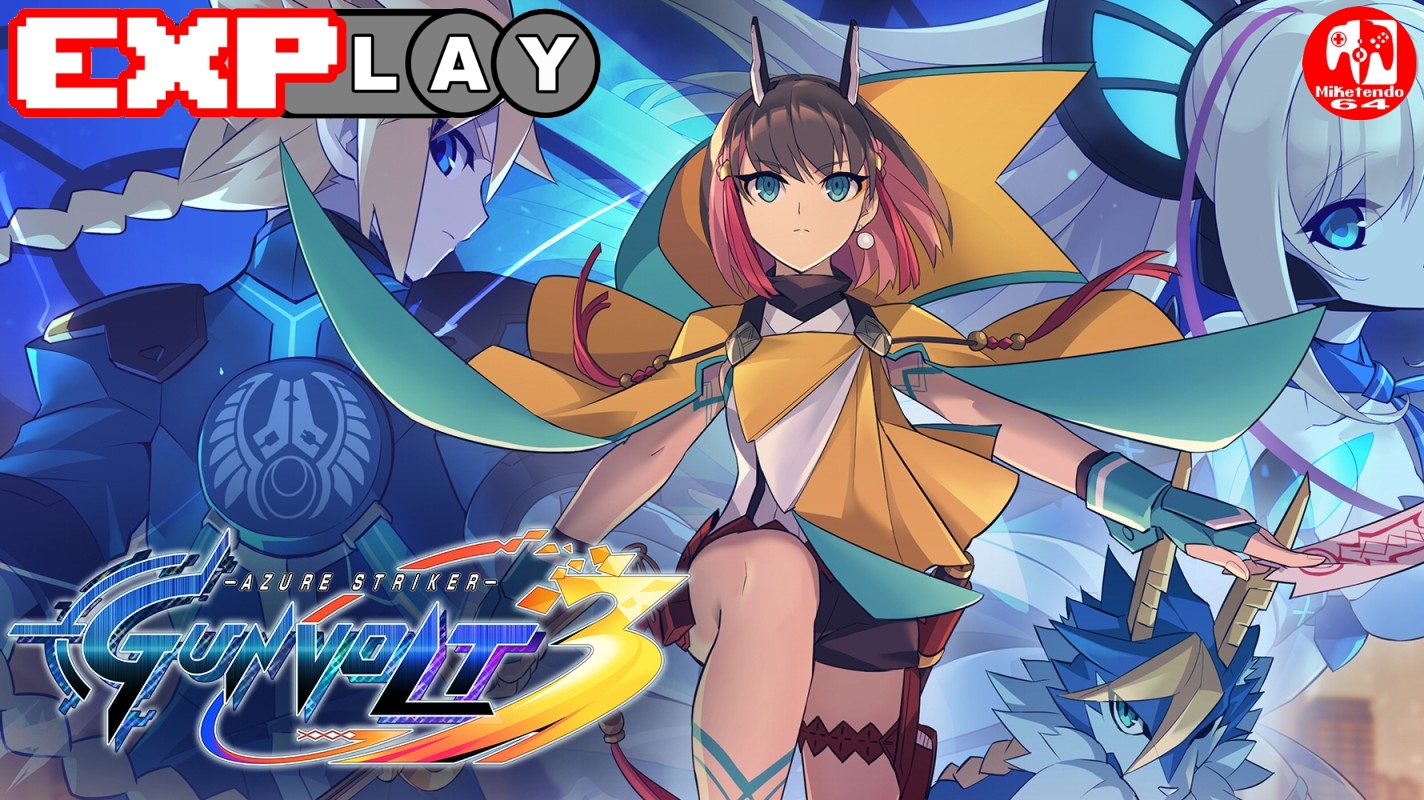 Welcome to EXPlay, (Explain & Play) the review series where we care not for scores but tell it how it is when it comes to every game we get our hands on, whilst also taking the time to include some lengthy gameplay, to give you the reader, the chance to shape your own impressions and views whilst watching and reading. In this instalment, we’re covering Azure Striker GUNVOLT 3 by developer, Inti Creates.

When it comes to Inti Creates, we all know they are true masters of the 2D platformer genre and that they love making sequels. With multiple instalments in both the Bloodstained and Blaster Master Zero series of games, there can be no denying how formidable their work has been with Azure Striker Gunvolt.

First starting as a single game in 2014, the series has gone leaps and bounds, thanks to two main series games and two a multitude of spin-offs in the form of Mighty Gunvolt, Mighty Gunvolt Burst, Gunvolt Chronicles: Luminous Avenger iX and Gunvolt Chronicles: Luminous Avenger iX 2. Each game offers fantastic gaming experiences, but now is the time for a true instalment with Azure Striker GUNVOLT 3 and GV is back, sort of.

Whilst it is true GV plays a rather important part in this brand-new Azure Striker GUNVOLT title, with the first half of the game’s story revolving around him, Azure Striker GUNVOLT 3 actually puts a new hero in the limelight, in the form of Kirin, Battle Priestess of Shadow Yakumo. It all starts with Kirin conducting a special mission involving her trying to uncover Sumeragi’s latest secret and stopping at nothing to find out an awful truth, what has become of GV since the events of the last game.

Featuring Primal Dragons and many more Adepts with a wide range of Septima abilities, Kirin finds herself having to carry out a near impossible task as she uses her fetters and forms an alliance with a revived Gunvolt, in order to restore peace to her country, in an effort to calm enraged Primal Dragons, whilst having to face an even bigger threat.

As players progress through the game’s story, the means to play as another character becomes unlocked, and players become free to swap between Kirin and Gunvolt, provided enough energy has been stored (more than 100%) in order to swap to Gunvolt, allowing players to let loose and find out just how much more powerful he has become.

In terms of visuals and gameplay experience, Azure Striker GUNVOLT 3 is still very much so the Mega Man-like experience previous games have been, still utilizing the pixelated 2D art style we love Inti Creates for, only this time the game has been fully optimized for the Nintendo Switch, all to make this instalment in the Azure Striker GUNVOLT the most detailed one yet in pixelated form and make it the most fast-paced outing yet. Be Kirin’s swift but stylish sword attacks or GV’s electrifying antics, there is plenty to see and love.

What’s more, something else that adds to the game’s rich gameplay is the new Image Pulses mechanic, which allows players to use abilities and skills based on other characters who have appeared as part of the Azure Striker GUNVOLT series. Enhancing each one will help players progress further with ease and offer a range of benefits but you are reliant on the game’s gacha mechanics regarding which ones you’ll be lucky enough to collect.

Then of course there is voice acting throughout, with both Japanese and English voice acting supported, all helping to make each character feel more alive than ever before and on top of the large selection or pre-existing songs that are available from previous games, Azure Striker GUNVOLT 3 has 7 new songs for Limen to belt out and really turn the tide of battle towards the player’s favour.

No disrespect to Kirin, as she is a very fun protagonist to play as, but it is weird to play a main series Azure Striker GUNVOLT game and have the titular Gunvolt, wind up as a secondary playable protagonist. If anything, perhaps Azure Striker GUNVOLT 3 might have benefited more if it was a spin-off, but part of the Gunvolt Chronicles series of games, titled something like “Gunvolt Chronicles: Battle Priestess of Shadow Yakumo.”

Despite this one main criticism, Azure Striker GUNVOLT 3 is a highly engaging game, which will easily go down well with the fans who have played previous titles, thanks to expanded lore and continued world building that only further adds to everything established so far.