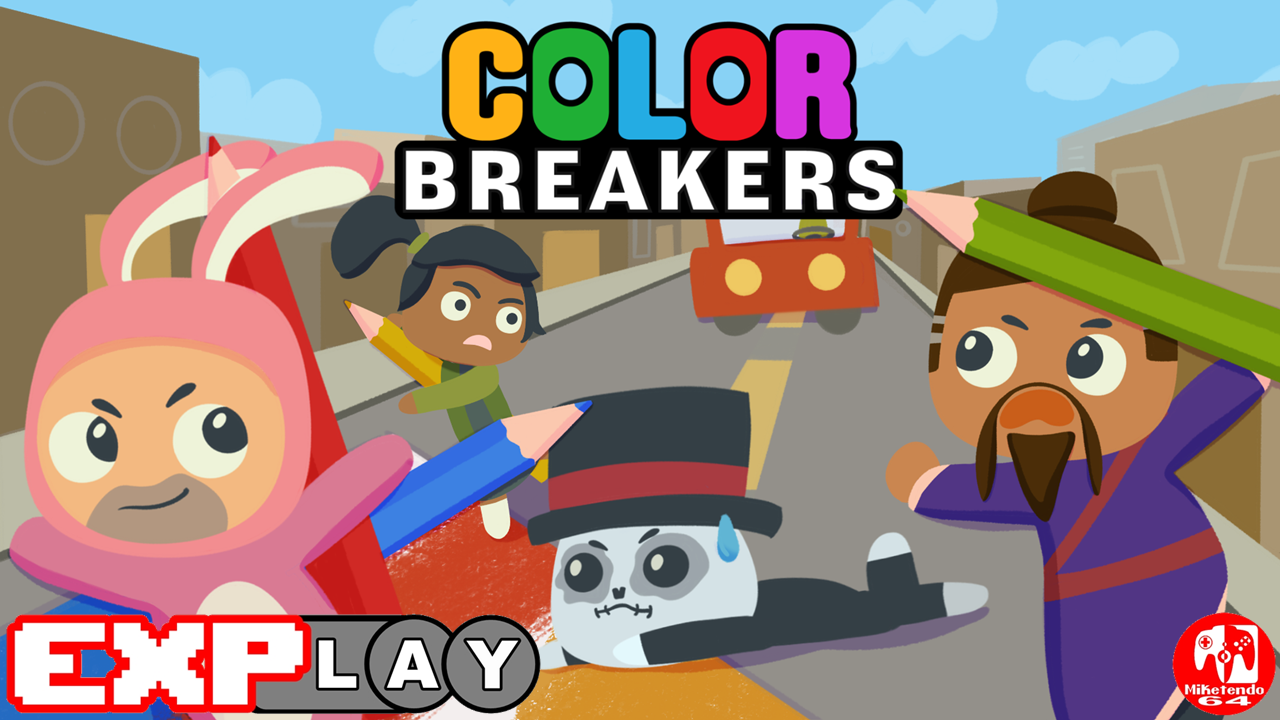 Welcome to EXPlay, (Explain & Play) the review series where we care not for scores but tell it how it is when it comes to every game we get our hands on, whilst also taking the time to include some lengthy gameplay, to give you the reader, the chance to shape your own impressions and views whilst watching and reading. In this installment, we’re covering Color Breakers by developer Deleon.

Color Breakers is a 4-player chaotic co-op party game that is like a combination of Overcooked meets Painting By Numbers (only without the numbers). It is developed by indie developer Andres De Leon and has recently been released on Nintendo Switch and is also available on Steam.

The game tasks players to paint as many pixel art paintings as possible in a limited amount of time. They are given an image and they must replicate it on a blank canvas with a selection of colored pencils. Once the painting is finished, a new image will appear, and then another and so on. You must move your character over to a colored pencil, pick it up and bring it back to the canvas and then color in! It sounds simple enough but the challenge comes in the forms of obstacles like the canvas rotating at annoying intervals, the lighting will suddenly go out rendering everything pitch black, oncoming traffic that will run you down without a second thought, cannon balls that will knock you into the water, and that is just highlighting a few of them.

When you start playing Color Breakers, you will only have access to a few different character skins like a skeleton in a suit, a strong man, a leprechaun, and a zombie but as you play through the game, you will unlock more skins like a sailor, vampire, police officer, chef, witch, etc. None of the skins affect the way you play in any way but they are a nice touch and a small incentive to keep playing to see what skin you unlock next.

Each level in the Color Breaker‘s Campaign Mode can be played singularly or with up to four players. The goal for all of them is to color in as many paintings as you can in the time limit. If you manage to color in one painting, you will receive a star at the end of the level, if you color in three, you will earn two stars, and finishing 5 paintings will reward you with the full three-star rank on that level.If co-operation is not really your thing, players can also compete against each other in Versus Mode. Local play supports up to four players on a single console but online play is still up to four players but limited to only one player per console. You can either host or join a room and you will be given a room code that can be shared with others so they can join the room.

Apart from the Local multiplayer, online multiplayer game modes, there is also a “Creative Mode” where you can simply create your own paintings in your own time with all the different colored pencils available and a Gallery where you can see the game’s other creative pixel art.

Color Breakers is one of those games that while it can easily be played on your own, it is much more fun when there are more players involved. Saying that, it does help when team members are well coordinated and can communicate well with one another. While I can’t full-heartedly say “OMG! You need to buy this game!” If you enjoy four-player couch co-op games that you can play with your family and maybe have little ones who want to join in too, you may be interested in Color Breakers.