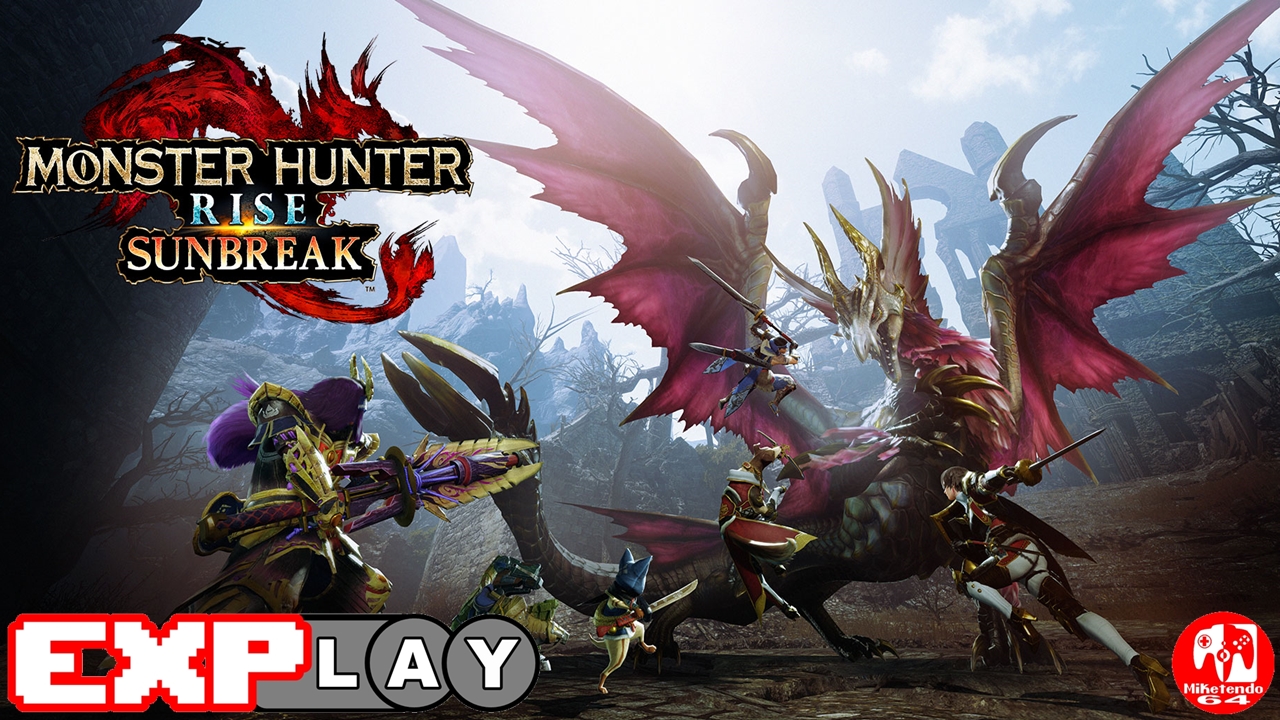 Welcome to EXPlay, (Explain & Play) the review series where we care not for scores but tell it how it is when it comes to every game we get our hands on, whilst also taking the time to include some lengthy gameplay, to give you the reader, the chance to shape your own impressions and views whilst watching and reading. In this installment, we’re covering Monster Hunter Rise: Sunbreak by developer Capcom.

The Monster Hunter series is no stranger to having DLC expansions being added to the base game post launch, be it a few months or even years later. Monster Hunter Rise: Sunbreak is the first big expansion for Monster Hunter Rise and will take hunters away from the comforts of Kamura Village and into the region surrounding Elgado Outpost. Don’t worry too much about not being able to go back to Kamura village though as you will be able to travel between the two regions in the Expansion.

Monster Hunter Rise: Sunbreak can be purchased digitally from the Nintendo Switch eShop as DLC or as part of a new Monster Hunter Rise + Sunbreak physical bundle that is available in retail. The one small snag is that you cannot actually embark on the Expansion content until you have actually beaten the base game first and completed the 7-Star Hub Quest “Serpent Goddess of Thunder”. After that, you will be able to embark on a new adventure to hunt even more Monsters in familiar and new environments.

Just like with the base game, the player takes control of an avatar of their own creation and must track down and hunt massive beasts either on their own or with a group of friends. Up to four players can work together either online or via Local Wireless, be it close friends or complete strangers. The goal is still the same though, Work together, hunt, win! As this is an expansion though, the avatar that you created for MH Rise will be carried over to the expansion but you will also be given an edit character voucher to alter their appearance should you wish too.

The main objective of MHR: Sunbreak is the same as Rise in that you take on quests and requests and fulfil them. The quests this time around can differ somewhat from the typical fetch quests and expedition quests of the base game and introduces Survey and Follower Quests (as well as the standard “hunt / capture monsters quests). In these single player quests, you will be accompanied by an NPC who will fight alongside you as you take on these quests. Upon the completion of a successful quest, you will earn experience that will allow you to not only level up and increase your standard Hunter Rank but also your “Master Rank”. As your Master Rank increases, you will be able to undertake tougher quests and challenges.

Any armor and weapons that you have forged during your time with Monster Hunter Rise will be carried over to Monster Hunter Rise: Sunbreak. You will still be able to upgrade them in Sunbreak and you will also be able to forge and upgrade even stronger gear as there are new monsters and subspecies of monsters that will reward you with even better materials.

All weapon classes from MH Rise carry over to MHR: Sunbreak so you can still use your favorite Dual Blades, Great Sword, or Gunlance (my personal favorite) on hunts. Any Palicoes and Palamutes that you have adopted or “hired” in the base game are also available to use in Sunbreak and more support classes seemed to have been introduced including the Bombardier Palico that will use explosives to deal damage to beasties.

The Wirebugs also return, as well as new skills that can be learned for each weapon. You will also learn how to switch skills in battle. By pressing ZL+A+X, you can switch between red scroll skills and blue scroll skills. You can choose which skills you would like to put in each scroll when at the hunter’s chest either in the camp or back at the Elgado Outpost. Switch skills can provide you with a great advantage on hunts as some skills may work better on certain monsters than others. Being able to switch between them on the fly just makes hunts that little bit easier. As for Wirebugs, new species have been introduced like Ruby and Gold Wirebugs that increase the amount of time you can ride a Wyvern or increase the damage a mounted punisher attack can do.

With Monster Hunter Rise being the first Monster Hunter game that I really got into, I am really glad that it got an expansion. I have sunk over 120 hours into the base game and while I am only just scratching the surface with Monster Hunter Rise: Sunbreak, I just know I am going to enjoy it just as much, if not more than MH Rise. The new setting and locales give me more areas to explore and challenging new monsters to hunt will certainly keep me engaged for quite some time.