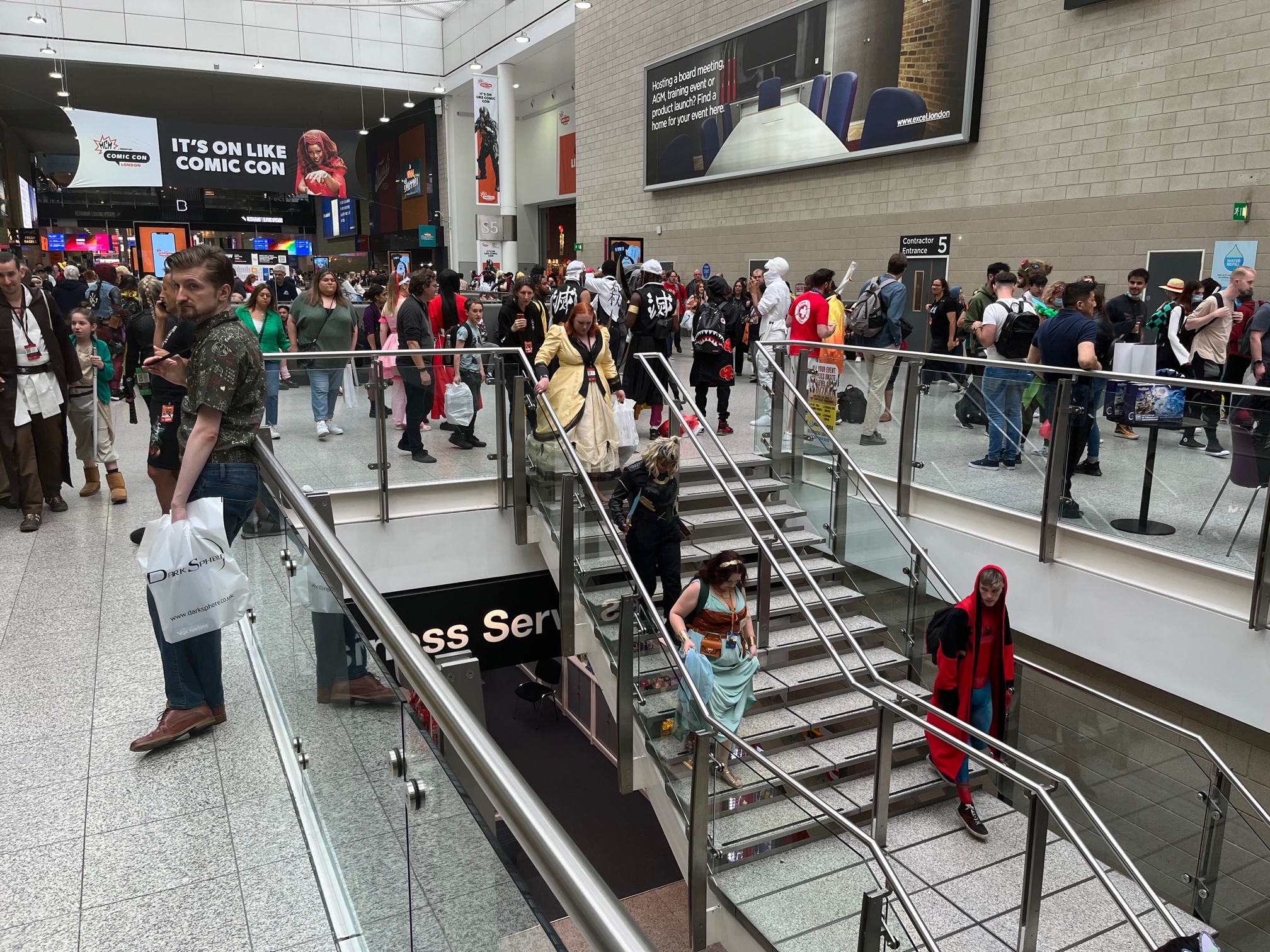 Having attended my first ever Comic Con back in October, this May, I had the chance to return to MCM London Comic Con, and what a completely different experience it was this time around. With 2021 still recovering from the covid-19 pandemic, whilst MCM London Comic Con 2021 was a packed experience, social distancing was maintained, attendees needed to make sure they tested negative and you had plenty of room to walk around without too much disruption.

Whereas this year, negative results weren’t necessary, a bigger line-up of celebrities and artists were in attendance and there were many times movement was restricted, due to the sheer volume of visitors this year. Comic Con might have returned to the ExCeL in 2021, but 2022 was the year Comic Con was back to its former glory and now on with the show.

As any convention, festival, or gaming show begins, it all starts with the journey and the preparations undertaken. Because I care not to bore you with making ham sandwiches for all the family, let’s dive right into the journey itself. As a non-driver who doesn’t live in London, today’s Comic Con adventure starts with a train. First, it was a case of riding the Greater Anglia, but instead of jumping off at Stratford and making changes from there, this year was the perfect opportunity to do things a little bit differently.

With the new Elizabeth Line finally open, it was swiftly decided to ride to London Liverpool Street itself and change there for the Elizabeth Line. We passed through your typical barriers and before we knew it, the architecture around us changed suddenly and your typical underground decor was replaced with something befitting a spaceship. Everything appeared to be clean and shiny, dazzling us with its uniqueness and multiple speedy elevators rides we weren’t expecting. It truly was a case of feeling like we were abducted by the mother ship, and being flown directly to our alien host’s home world and that world was MCM London Comic Con 2022.

As an enjoyable ride it was via multiple trains, like everyone else, we still needed to queue up and get in line, should we wish to collect our press passes and make our way inside. So, off we went, this way and that, following a horde of Comic Con zombies, making slow progress as more than a thousand of us edged closer and closer to each goal post until finally reaching our destination. The only consolation for the extra time spent loitering on our feet, is the extra time to appreciate all of the amazing costumes we were surrounded by.

With lanyards finally around our necks and entry into the kingdom of united fandoms permitted, we trapsed through the very halls we explored the year before, but at a slower pace we’re not used to. Last year’s MCM London Comic Con 2022 was big and bustling, but surrounded by the masses, shoulder to shoulder against a sea of human beings, highlighted by stunning costumes, dazzling colours and a variety of fabrics, just trying to get anywhere, was a timely affair, made worse by the fact of maneuvering a double baggy.

Still, we made the most out of a negative thing, by maximizing the time it did afford us. The food trucks, concession stands, Artist Ally and more, always provide an extensive list of things to mull over and by moving slower, we had all the time to take in everything each stall had to offer, before moving on to the next one and then the next one.

For the most part, the layout of the show floor was what you would expect from a large-scale event and where there was free space, there was enough of it to be enjoyed. The maps and directions were helpful, the only time we ever got lost, however, was when trying to find the press room. It actually became a running gag that no matter where we went, or where we looked until we stopped trying, only to find it directly in front of us. Of course, whilst looking, we also found a flooded bathroom that required wellies should you wish to enter and tempt fate.

On the subject of the stalls and their vendors, with all manner from comic book, to official merch, not just the MCMC Comic Con branded goods, but everything else as well, if there was just one thing these conventions were good out, it’s the compulsion to spend. I find it so insanely funny how one can go to an exhibit and a compulsive need in the brain takes over, insisting you’ve come all this way, there’s no way you can allow yourself to leave empty-handed.

Be it a new lightsaber for your collection, a signed comic book, memorabilia from your favourite show, or simply a signed photograph, sure enough, there is something that will get you to part with your hard-earned cash. Whilst managing to remain strong and ignore the desire to digest some glorious smelling street food that I felt would not sit right with me, instead I would go on to spend a tidy sum, purchasing presents for those I was with and for a few of those who were unlucky to join us.

Among the many items I procured though, the one that stands out the most, would be a long-sleeved Hellfire t-shirt from Stranger Things, a show I had never actually watched before, despite its insane popularity on Netflix. Not because I wouldn’t be interested in it, but purely because of time constraints and obligations that simply must come first.

Comic Con would not be Comic Con without the infamous celebrities, artists, writers and creators that attend every show. I know for a fact they are one of the reasons why I enjoy shows such as this, especially when you get the chance to interview some of the talent, speaking with people you’ve hero worshipped for years, only to then have them stood opposite with you, engaging in an actual conversation isn’t taking place in your imagination.

Sadly, I wasn’t able to conduct any interviews this time around, which was my biggest highlight from last year’s show, but I did get to meet a certain Power Ranger, spoke with a few comic book artists whose stuff I have followed in recent years and oh, I got to lay eyes on Robert Sheehan. Having first seen him in Misfits, I was completely taken in by his portrayal of Nathan and I have been a fan of his ever since. Of course, his best role has to easily be Klaus from The Umbrella Academy and I absolutely cannot wait to see what he and the rest of the gang have to bring to the table in season 3 when it finally hits Netflix.

While you might have to pay to get in line to get your favourite celebrities to sign something, with panels, you get to sit in a large hall amongst a sea of fans and attend panels hosted by beloved icons. If you’re really lucky, when the Q&A sessions open up nearer to the end of the panel, you might get the opportunity to be among those lucky enough to ask a question and get it answered.

Sadly, we didn’t attend too many panels this year, but we did attend make sure we attended the Bob’s Burgers Movie Filmmaker Panel, with the likes of Loren Bouchard, Nora Smith and Bernard Derriman attending via a video call. Bob’s Burgers was never really a show that I became obsessed with and I am in no rush to go out and see the movie, but it was good to see how passionate the filmmakers are regarding the move from TV to film were and how well received the transition is, by the fans who were in attendance. Plus, seeing an actual, physical Bob’s Burgers van, was fun as well.

The difference between last year’s and this year’s show is chalk and cheese. One was relaxed, informative and an all-round pleasant time, where we were fully able to take everything in. This year, however, everything was in full swing and despite our best efforts to try and see and do everything we could, we probably only got around to experiencing a 10th of the full experience and that’s a shame. It really was a case of time not being on our side, but having said that, it was still a momentous day, full of memorable moments that do leave me excited for what the next show could bring.