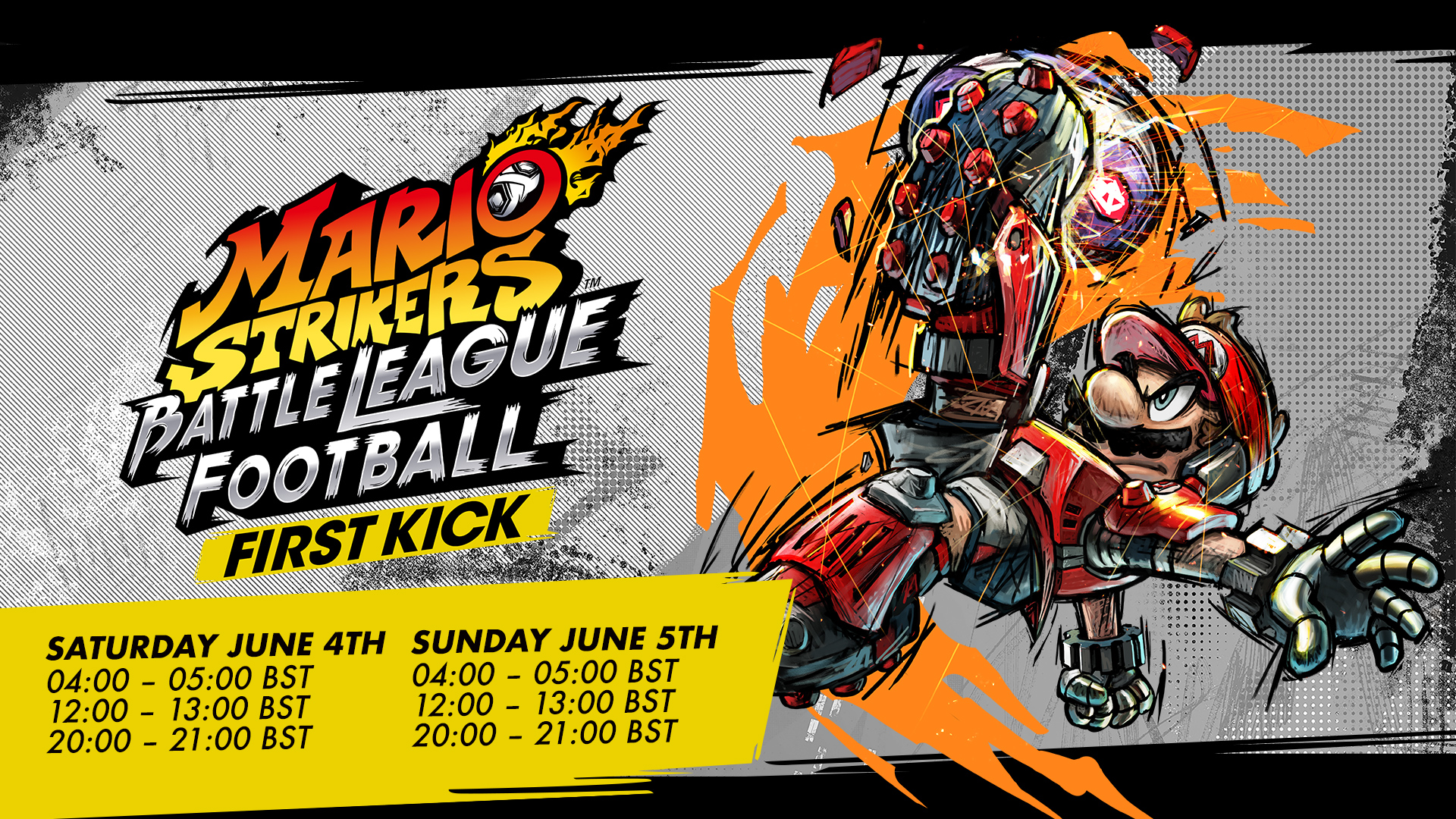 To quote a certain professor, “good news everyone”, Nintendo has just announced ahead of Mario Strikers: Battle League / Battle League Football, on June 10, 2022, a first kick demo for the game will be out before the game releases. What’s more, for those who are Nintendo Switch Online subscribers, you can try it today.

The official news and overview trailer covering all this and mention of post-launch content, can be seen here:

27th May, 2022 – Mario Strikers: Battle League Football launches for Nintendo Switch on Friday 10th June, and players eager to sharpen their shooting skills can get ahead of the competition. Mario Strikers: Battle League Football First Kick* demo event is available to download now for free on Nintendo eShop and includes access to exciting online** team battles – available on Saturday 4th and Sunday 5th June, as well as a training mode to learn the basics, so players can get stuck into some pre-season ‘friendlies’ in preparation for match day. Nintendo also announced that the full game will receive free post-launch updates, including new characters. In the meantime, check out the recently-released Mario Strikers: Battle League Football – Overview Trailer to see all the ways players can thwack, zap and dropkick their opponents on the way to victory.

The Mario Strikers: Battle League Football First Kick tutorial*** mode, available now to existing Nintendo Switch Online members and from 2nd June also for players taking part in the free Nintendo Switch Online 7-day trial, teaches players all of the basics, from shooting, passing and tackles to more advanced moves and skills. Once players are accustomed to the controls, they’ll be ready to put everything on the line and take on other budding strikers online on Saturday 4th June and Sunday 5th June during the times listed below:

With online team matches for Mario Strikers: Battle League Football First Kick, players can form a team with other players and challenge others online. Each team can consist of players from 2 Nintendo Switch consoles, and a maximum of 2 players can join the team from each console, making it possible to line up with up to a maximum of 4 players per team. It is possible to form an alliance with random players or friends online. Experiment with all 10 characters in the game, test their unique abilities and assemble a team based on your preferred playing style.****

From Thursday 2nd June at 11:00 BST, players without an existing Nintendo Switch Online membership can claim a free 7-day trial, even if they’ve used a free trial in the past. Not only does this grant access to the Mario Strikers: Battle League Football First Kick demo event, players can also experience a week with all the benefits that the Nintendo Switch Online membership has to offer, including access to a curated library of over 100 NES & Super NES titles, online play with compatible titles, cloud saves and more.

Download the Mario Strikers: Battle League Football First Kick demo event now for free on Nintendo eShop and try Mario Strikers: Battle League Football’s training mode as well as online quick battles on Saturday 4th June and Sunday 5th June. Those who don’t have a Nintendo Switch Online membership and want to get in on the action can claim a free 7-day trial from Thursday 2nd June at 11:00 BST. Players who purchase the full game can look forward to free post-launch updates, including new characters.

Introducing Strike, a 5-on-5, soccer-like sport with no rules—do whatever it takes to win! Get gritty and try to score the most goals by tackling enemies, using items, and pulling off score-boosting Hyper Strikes. Super Mario series mainstays like Peach, Toad, and Yoshi put their cleats (and stats) to the pitch and will stop at nothing to score. Customize your characters with gear that can augment their stats and appearance. Take the carnage online* or pass the ball to players locally**—just look out for the electric fence.

Join an online club to push and shove your way up the ranks – Band together with up to 20 strikers online* and compete against other clubs for points. Find the right club for you, team up with friends, and bring your own striker style to the table. Strive to become the world’s top club each season!

Pummel the pitch with up to 8 players – 8 players can go for the goal on one Nintendo Switch system, with local wireless**, or online*. Bring along a secondary striker on the same system in online battles, too. Locally, 4 players on each team can go cleat-to-cleat in individual matches.