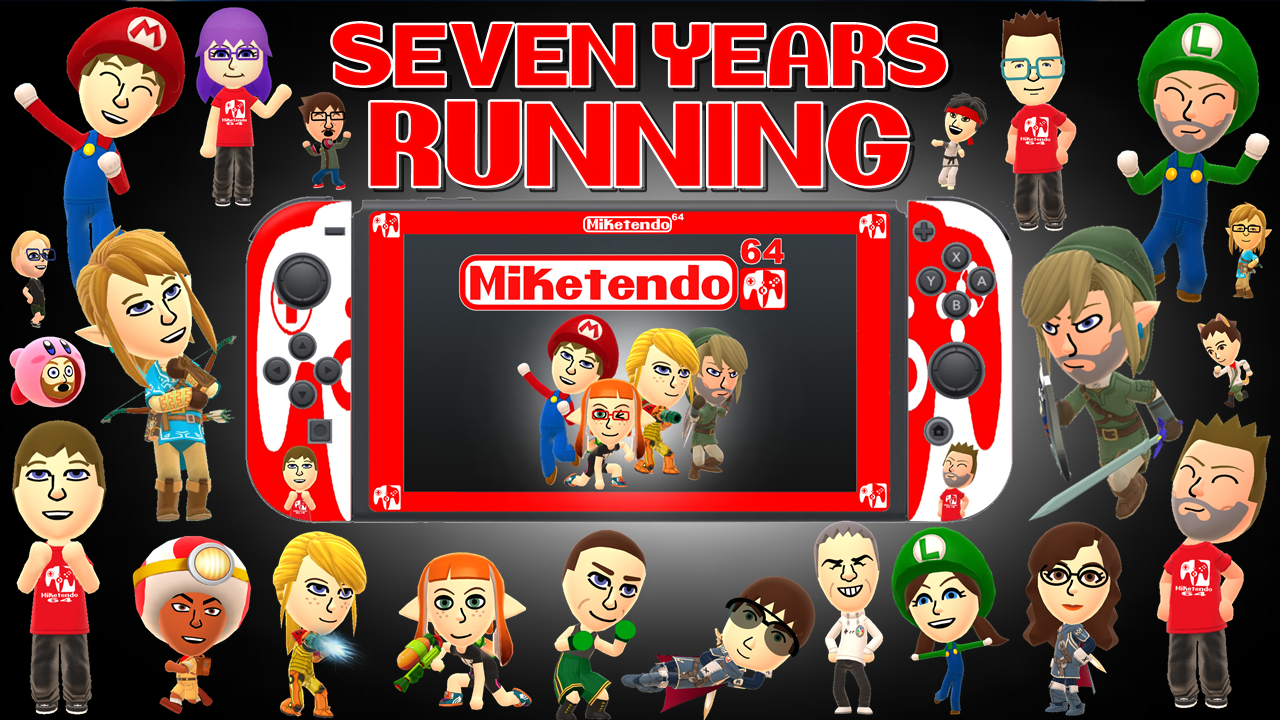 Hey again! Glad to see you came back for part two of our Favourite Moments. If you didn’t read part one, then I shall give you a little refresher (or you can read the whole thing). As Miketendo64 celebrates its seven years of operation. I am taking a look back at some of our favourite moments from each year. Part one covered our fav moments from 2015 up to 2017 and this time, we are looking at 2018 up to now.

2018 was a bittersweet year for Miketendo64. It came with one of our greatest highs and hit us with one of our lowest lows. In November that year, our website crossed the threshold of 1,000,000 views! To us that was absolutely incredible and an achievement we never thought would be possible. It was a great time to get together with my brother Jack and sister Ashleigh and celebrate the occasion in the only way we know best. With Cake! Ashleigh makes some truly incredible cakes and this Miketendo64 celebratory cake was one of her best yet!

Don’t we look happy in that photo? Ideally, we really should be but if you look again, maybe you might notice something a little “off”. As we mentioned before, Miketendo64 had hit one of its low points before this milestone. Though it is by no means a favorite moment for us, it most certainly impacted us and will forever stay in our memories. Our father John passed away just the month before at the age of 56 from a heart attack. It really shook us deeply and we had a really hard time coming to terms with it. Our father was not a gamer himself but seeing how immersed he got in games like Wave Race 64, Boat Duel (NES) and Aqua Jet (arcade), were moments we would never forget.

Our father loved boats and Jet Skis and we do mean the actual Kawasaki Jet Skis (though he had a fair share of PWC’s in his time as well). When he played games like Wave Race and Aqua Jet, he would really throw himself into the game and would bank himself when he went around a corner and flick the controller into the air as he went over a wave. We like to think that the very sight of him doing this is why motion controls were invented. May not because of him personally but because perhaps family members of game developers possibly did a similar thing and it inspired them to work on making motion controls a reality.

After the sorrow note from 2018, it’s time to bring back some levity. 2019 was the year Miketendo64 went international. We had only ever been to gaming events in Spain so far but now we were going further afield. As summer fast approached, it meant one thing: Gamescom! Earlier in the year, I had scrimped and saved as much as I could so that our Editor-in-Chief Jack could go to Köln (Cologne) in German to attend Gamescom. This was such a big moment for us. We may have joined the big leagues when Nintendo UK recognized us as press but this was WORLD CUP level for us.

Jack represented Miketendo64 as he went to Gamescom and he wasn’t alone. He was joined on this adventure by Paul Murphy of Switch Player and Richard Atkinson, who at the time was writing for Switch Player. Jack was only there for a few days but they were most certainly eventful for him. I was plenty envious that I couldn’t go myself but was truly proud that my bro could go to this huge event for us and I’m sure it is a highlight in his video game journalist career. Oh, and he also met Goichi Suda AKA SUDA 51 there too!

I didn’t miss out on all of the fun though in 2019. That October, I flew from Malaga, Spain to London, England to attend EGX. While it may not be on the same level as Gamescom or E3 (at the time), it was still a pretty big thing, and was the largest event in the UK so it was something we totally had to go to. Though I didn’t know what to expect from EGX 2019, I am glad to say that it did not disappoint. The event itself was pretty spectacular and much larger than anything I had been to before in Spain (though for Jack, it was quite small in comparison to Gamescom, ha ha). There were so many games to play and merchandise stands packed to the rafters with video game collectibles and goodies.

The true highlight for me though was being able to meet people that I have spoken to over the years through social media and meeting game devs and publishers in person for the first time. Being able to meet the people that work on our favourite games was such an honor for me and being able to thank them for creating such games and giving us the opportunity to review them for our site. The best feeling of all was meeting fellow members of the gaming community. People who we have been speaking to for the last few years like Dottie and her partner Sebastian, Jack from Nintendo Village, and Barry of Impact Game Station. It was a pleasure to meet them for the first time and spend time with them. Video games are great but proper interaction with people is important too and it is even more fun when video games are involved!!!

I think we can all agree that 2020 was pretty much a total write-off in most cases. The global pandemic hit and hugely impacted the world in ways we never thought imaginable. Millions of people were dying of COVID-19, we were all locked in our homes under curfew. The world’s hospitals were at their breaking point and medical staff were exhausted. So, you may ask what exactly would have been a memorable moment for us from 2020. Well, just before the world stopped turning in March, I had visited the UK to see family and to attend a couple of private press events as well as meet up with some fellow Gamer peeps from Social Media.

In regards to press events, Koei Tecmo Europe had invited us to try out Warriors Orochi 4 Ultimate on Nintendo Switch. It was held at the Loading Bar in London and it was the first time I actually met Nathan who has been our contact at Koei Tecmo Europe for the last few years. At the event, I also met Patrick of Nerd Over News, Juan from Switch Watch, and Laughing Fox. The event itself was pretty cool and there were even free cocktails served at the bar that were themed on different protagonists from the game.

The week after, I also attended another press event for Wired Productions. I had the chance to play games like Deliver Us the Moon, Those who Remain and The Falconeer. I even got to speak to the developers of these games and the one game that I probably spent most time playing was The Falconeer. It wasn’t slated for Switch release at the time, but I was very happy that it did finally come to the system in 2021.

I also found time on my trip to catch up with Richard Atkinson and Paul Murphy on different occasions. It was nice catching up with Richard as it had been a while since I saw him last (his 30th birthday if I remember correctly). As for Paul, it was the first time for me to meet him in person as he met Jack the year before at Gamescom. It was nice to share a couple of beers with them and talk about video games and where our respective outlets were going. Fun times, that we held on to deeply as the Pandemic took its nasty grip upon the world, just weeks later.

And with that, part two has come to an end. For part three, we will be looking at 2021 and the first part of 2022 in the History of Miketendo64. Again, thank you for reading up to the very end and I hope you will join us for part three soon! Until next time, Keep On Gaming!