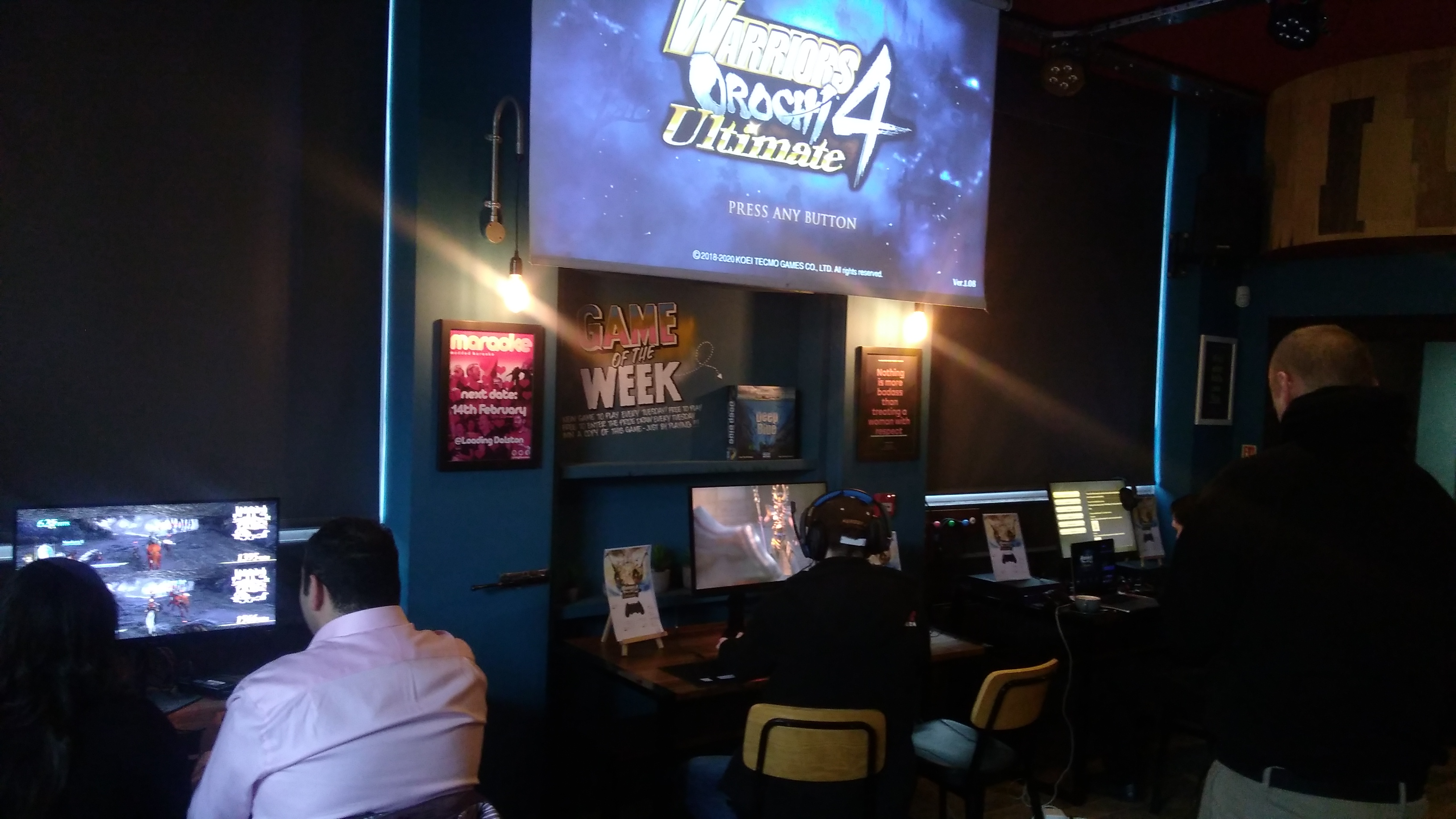 I was most fortunate to attend an early access event for Warriors Orochi 4 Ultimate. The event was organised by Koei Tecmo Europe and hosted in Loading Bar in London. When I was there, I was welcomed by the Nathan Mills of Koei Tecmo Europe who invited me to the event. I also met up with Laughing Fox, Juan from Switch Watch and Patrick from Nerd Over News. Patrick had come all the way from Germany to attend the event, which was not much different from me flying all the way from Spain.

Inside the Loading Bar, there was Warriors Orochi 4 Ultimate promotional materials decorating the interior. The consoles and PCs in the bar were all loaded up with their respective version of the game which, allowed multiple people to play at the same time. To further mark the occasion, there were even special themed cocktails named after characters from the game. The best thing I saw though was the huge cutout of the divine canine companion to new character Jang Jian called Xiaotian. When we arrived at the event, there were already a few people inside but it soon filled up as time went on. Still, there were plenty of consoles and computers available so it was never an issue in waiting to play.

Nathan presented Juan, Patrick and I with the Nintendo Switch demo unit which had a copy of Warriors Orochi 4 Ultimate on it. WO4U is a hack & slash, 1 vs. 1,000 game developed by Team Ninja, Omega Force and Koei Tecmo. It features characters from three video game series: Dynasty Warriors, Samurai Warriors and Warriors Orochi. The three of us took it in turns of playing the game singularly and together. We also had the privilege of playing with single Joy-Con controllers as the game supports the layout.

Playing the game in handheld mode has its upsides and downsides. When one person is playing single player, you have the full screen at your disposal. The frame rate is pretty good, even when there is plenty happening on the screen. However, there are some instances of slowdown when the screen is really crowded with enemies. This becomes more noticeable still when two people are playing split-screen multiplayer. The resolution still holds up even in multiplayer so there is no worry of a repeat performance like Hyrule Warriors on the Wii U. As regards to navigating your way around each stage, it can be a bit tricky working out where you are on the mini map.

With the map looking much smaller, it becomes even harder to look at, the further away you are from the small screen. When playing on a big screen though, it is absolutely stunning. The visuals are incredible and you can enjoy the action in all its glory. During the event, I played Warriors Orochi 4 Ultimate on the big screen with the PS4 version. I did play the Switch version in docked mode when I got home and it still looks amazing.

Warriors Orochi 4 Ultimate has new content like new characters, new stages and features that was not included in the original title that released back in 2018. The story has also been extended and reveals who was really behind the Gods deciding to bring all the warriors together. The Infinite Challenge mode further adds more gameplay time for players to lose themselves in.

That will do for our Hands-On feature for Warriors Orochi 4 Ultimate. A full review for the game is in the works, which we hope to have out as soon as the embargo lifts. I want to take the time to thank the incredible Nathan Mills of Koei Tecmo Europe for inviting us to the event and the wonderful staff at the Loading Bar for the bar service. The event was a great opportunity to meet old friends and make new ones and I hope to be able to do it again soon.