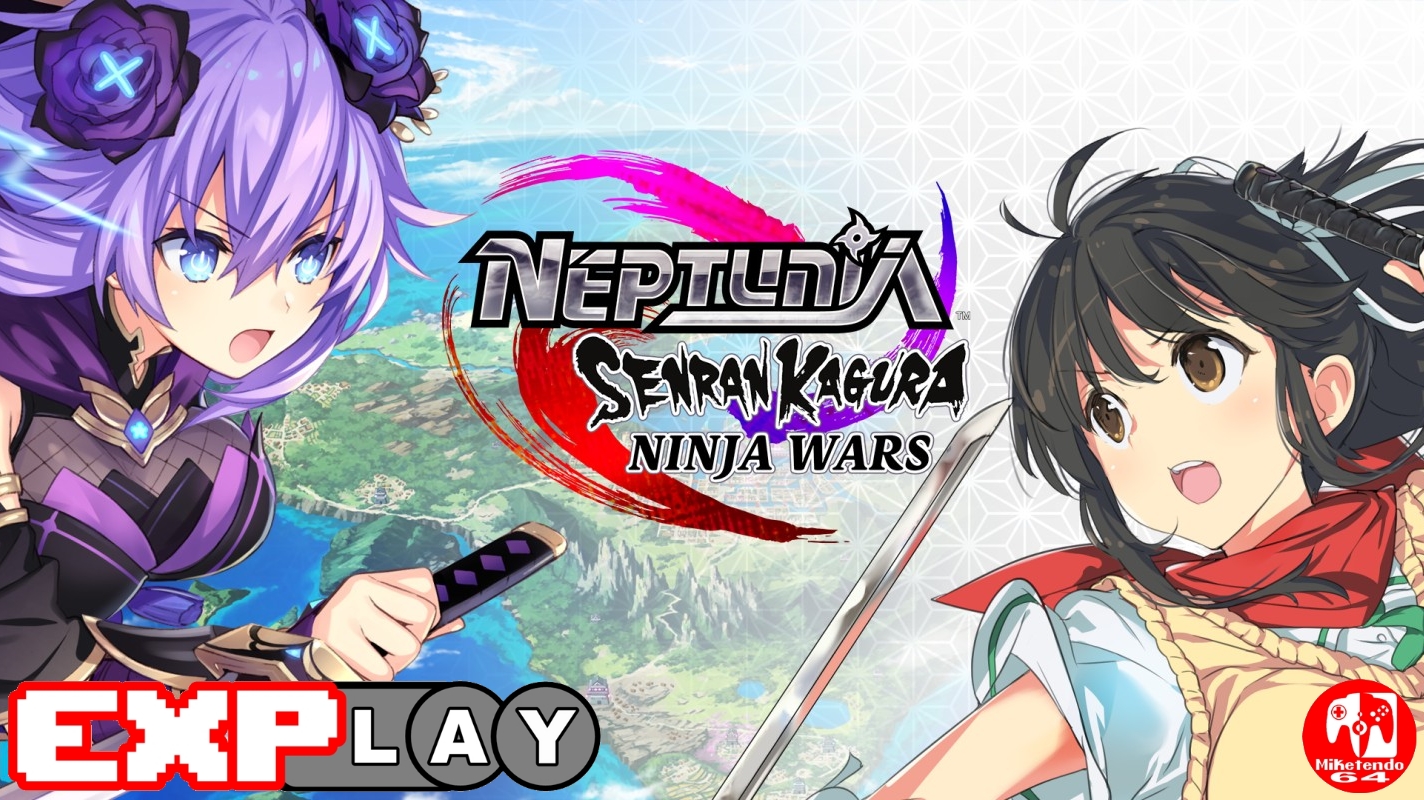 Welcome to EXPlay, (Explain & Play) the review series where we care not for scores but tell it how it is when it comes to every game we get our hands on, whilst also taking the time to include some lengthy gameplay, to give you the reader, the chance to shape your own impressions and views whilst watching and reading. In this instalment, we’re covering Neptunia x SENRAN KAGURA: Ninja Wars by joint developers, Tamsoft and Compile Heart.

When it comes to videogames and the gaming scene, everything evolves and sometimes dreams do, in fact, come true. Long wait periods might be expected, but dead IPs have returned, unexpected games were remastered and niche, yet bizarre crossover games do happen. What’s more, when they do happen, sometimes, they well and truly knock it out of the park. Now we have entered into the era of Neptunia x SENRAN KAGURA: Ninja Wars, a crossover that brings Hyperdimension Neptunia and SENRAN KAGURA together, and giving them a ninja setting.

Initially released in 2021, but now on Nintendo Switch in 2022, Neptunia x SENRAN KAGURA: Ninja Wars is the story of two warring nations, in a land full of devotees to Ninja Arts and the way of the Ninja. In one corner, we have four recognizable SENRAN KAGURA characters, practitioners of the Honeypa Style, locked in a fierce battle against the Four Goddesses, made up of Hyperdimension Neptunia characters, practitioners of the Compa Style. Yet, the two sides will soon find themselves faced with an even bigger enemy to face when the Steeme Legion comes calling.

With fierce skills and a leader well versed in the Headshot style, this mechanical army is ready for a Super NINJA War and anyone who stands against them must be wiped out. The warring factions will soon have to put the past to rest if they wish to come out on top in this fight, and for some characters, it’s a hell of a lot easier than others as they already desire to be friends, despite the differing nations they call “home.”

In terms of gameplay, Neptunia x SENRAN KAGURA: Ninja Wars is an RPG that does feature some similarity to previous SENRAN KAGURA games, but series regulars will notice the gameplay here feels slower by comparison. On the upside, long-ranged attacks have been introduced via throwable kunais and shurikens, a vital asset that allows them to maintain their combos and deal damage from a distance when not relying on Ninja Arts.

What’s more, with a total of 10 playable characters, swappable costumes and a buddy system that allows you to take a leader and a partner into a dungeon, players are free to swap between them, at any time. This allows you to mix and match your favourite characters, whilst also giving you a chance to play around with each one. Getting a feel for who presents a fighting style you prefer more, and discovering who is best for one-on-one brawls, and who can really stick it to an audience.

All characters can gain experience and level up, which when triggered in the middle of a level, will completely restore your health. The main gameplay does revolve around the game’s regular main mission dungeons, complete with two kinds of chests (one that requires a key and one that doesn’t), multiple paths can be explored, puzzles could require solving and fierce bosses can be lying in wait for you. Yet, there are added features in the form of nifty little quests, Ninchat, a feature where you can talk with other characters, acquiring rewards for your efforts, or new requests to try out.

There is even a minigame where players must focus on balancing their beloved characters, on a peach. With multiple difficulties to try out and more in the post-game, attaining success here will see your character presented with power-ups to help you out on the next missions you play. For more stat boosting benefits, you can always mix and match your Spirit Gems, which can be purchased from the in-game store, or acquired from defeated enemies.

On a visual scale, expect a lot of still imagery and text boxes between interacting characters, with Japanese voice overs. You will plenty to read through at times, often resulting in the game feeling more like a visual novel, but it’s still a pretty game nonetheless, with interestingly designed main characters, less interestingly designed enemies and more curves and bends than a Formula One race track.

Whilst a lack of a multiplayer experience, be it local or online, feels like a completely missed opportunity, there can be no denying how fun the game actually is. Be you a fan of Hyperdimension Neptunia, SENRAN KAGURA or even both, there is plenty for fans to enjoy. Filled with the humour and comedy styling that both games are known for, the interactions between the characters will get you laughing at some point, be it a simple exchange between characters, or one of the many meta jokes that demonstrate just how aware the characters are of their current circumstances.