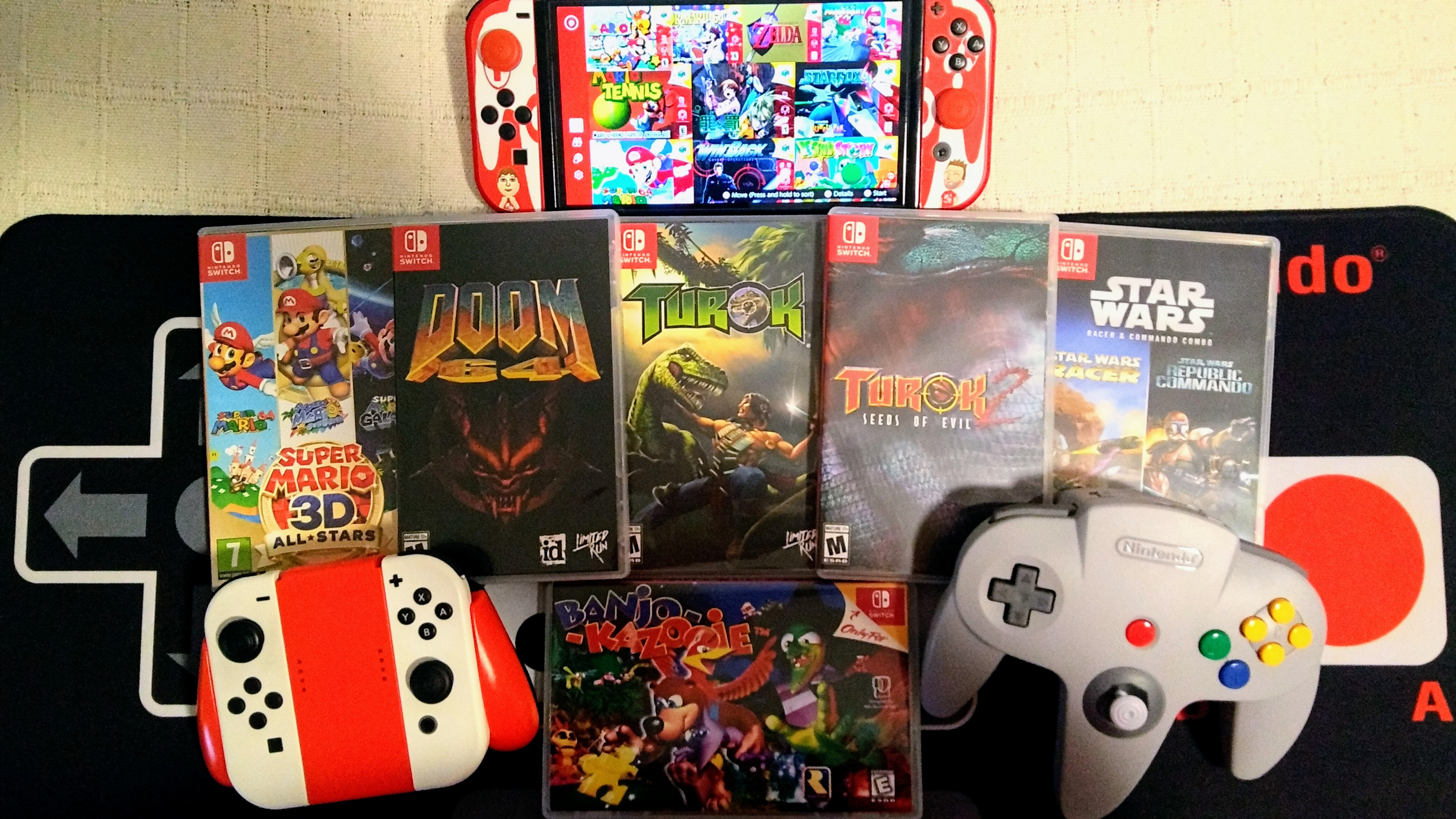 [Feature] Could More Legacy Nintendo 64 Games Be Coming To Switch?

While we recently covered Wii U games being ported to Switch, we now take a look at the number of Nintendo 64 games that have come to the console and what other games could possibly be on the way. We will touch upon the remasters of such games like Turok, Turok 2: Seeds of Evil, Shadow Man, Doom 64, and Star Wars Episode I: Racer. We will also take talk about the Nintendo 64 – Nintendo Switch Online + Expansion Pack and the next potential games to come to the service. Last but not least, we will also discuss our thoughts on the recent rumors about GoldenEye 007 coming to Switch and Xbox as well.

The Nintendo 64 – Nintendo Switch Online + Expansion Pack (which we will henceforth refer to as N64-NSO for convenience) is a collection of Nintendo 64 games that are available as part of the Nintendo Switch Online + Expansion Pack service. As long as you have a current subscription, you have access to such legacy titles like Super Mario 64, The Legend of Zelda: Ocarina of Time, Yoshi’s Story, Starfox64, Paper Mario 64, Mario Kart 64, Mario Tennis, Dr. Mario 64 WinBack: Covert Operations, and Sin & Punishment.

Soon to be added to the library (at the time of writing this article) is a game that I have been longing to play again for an age, is Banjo-Kazooie. It is one of Rare’s absolute masterpieces and the pinnacle of 90’s 3D platformers. How Nintendo managed to get this game for the N64-NSO could be believed as a miracle but their current close relationship with Xbox probably helped seal the deal. Though it might seem greedy to ask but I do hope that with Banjo-Kazooie being added to N64-NSO, it may bring the possibility of its sequel, Banjo-Tooie, as well.

Other games that have been announced to come to the N64-NSO library at a later date include The Legend of Zelda: Majora’s Mask, Kirby 64: The Crystal Shards, Pokémon Snap, F Zero X, and Mario Golf. It would be safe to assume that other classic games like Wave Race 64, Mario Party, and possibly Super Smash Bros. could also be added much later on.

So far, as updating the N64-NSO library goes, it seems like Nintendo will be adding a Nintendo 64 game once a month to the library. A lot of people are not too keen on the idea as the possibility of getting a game they are looking forward to may take much longer to become available. Other people have argued that there are not nearly as many “Good” N64 games so Nintendo are probably releasing them once a month as not to run out of “decent” games to add to the library. Whether Nintendo decides to add more games monthly or not is obviously their prerogative and we will just have to accept it whether we like it or not. It may not be Gamepass like on Xbox Live but if we wanted Gamepass, we would own an Xbox.

Outside of the Nintendo64 – Nintendo Switch Online + Expansion pack library, a number of Nintendo 64 games have been faithfully remastered and released on the Nintendo Switch. Thanks to the work and dedication of Nightdive Studios and Aspyr Games, classic games that have long since disappeared from the public eye have made a return.

Nightdive Studios, for example, has painstakingly brought back not one or two, or three, but at FIVE Nintendo 64 games from the grave and given them not just a simple graphical overhaul but even went as far to add new content / restore cut content to the games. Thanks to these legends, cult classic games like Turok Dinosaur Hunter, Turok 2: Seeds of Evil, Doom 64, Quake, and now Shadow Man Remastered, are all playable on Nintendo Switch.

As for Aspyr, they too have brought a classic Nintendo 64 game back in the form of Star Wars Episode I: Racer. I have had many a fun time playing this on the N64 back in the day with my brother and it is still pretty fun to play on Switch. Aspyr have worked hard to resurrect classic Star Wars games originally developed by LucasArts, and I look forward to seeing more classic games like Shadows of the Empire or Rogue Squadron possibly making a return as well.

As regards Nightdive Studios, I could possibly see other Turok games possibly making a comeback with Turok Rage Wars and Turok 3. I am somewhat doubtful, however, in that these games might not actually see the light of day again. Not because Nightdive couldn’t remaster these games, I just feel like there might not be as big a following for these titles that would warrant remastering them. Just because I would love these games to happen, it doesn’t mean that millions of others feel the same way.

That One Nintendo 64 Game On Switch From Nintendo

So far, there is one particular Nintendo 64 game that is playable on Nintendo Switch twice. I am of course referring to Super Mario 64. The game is available as part of the N64-NSO library and it is one of the three games included in Super Mario 3D All-Stars. It is quite interesting why Nintendo decided to have this game available by two means. Surely, they knew the game would be part of N64-NSO later on when they included it in the 3D All-Stars collection.

This might possibly be why the Super Mario 3D All-Stars was a limited time release, so that it didn’t lapse with the Nintendo Switch Online + Expansion Pack service. That way, anyone who didn’t get the 3D All-Stars Collection could still play Super Mario 64 if they owned an NSO+EP subscription.

With Super Mario 64 being playable twice, it does open the possibility of other Nintendo 64 games getting the same treatment. For example, The Legend of Zelda: Ocarina of Time and The Legend of Zelda: Majora’s Mask could still see a rerelease and be part of a collection. An even crazier idea is Banjo-Kazooie and Banjo-Tooie could also see a similar dual release (next to impossible, I know, but a boy can dream).

Could GoldenEye 007 Be On The Way To Switch?

Now, while we try to avoid covering rumors and “leaks” where we can, there has been a lot of talk recently about GoldenEye 007 possibly making a return. The rumors and “leaks” surrounding the game have come from a full list of Xbox achievements and screenshots surfacing on the internet. Weight to the rumor is further added that two Rare developers have already unlocked the achievements themselves, meaning that the achievements aren’t just a mock-up but fully functioning as well.

“How is this relevant for Nintendo Switch though?” you may ask. Well as pointed out by RGT 85 in one of his recent videos, he is of firm belief that the GoldenEye 007 could come to Switch as well. We like to share in this belief as well because he does make some valid points. While Xbox own Rare and have struck a deal with MGM studios for the licensing of the game, Nintendo still have some rights over the game as they helped developed it.

It is quite possible that thanks to the relationship between Xbox and Nintendo, they have come to an accordance that would allow Xbox to publish GoldenEye 007. What this could mean for Nintendo is that they too might also get GoldenEye 007 on Switch as well, whether it be the standalone remaster or its inclusion in the N64-NSO library. Of course, another possibility is that maybe Banjo-Kazooie being part of N64-NSO may have been the trade-off for Xbox having GoldenEye 007. That is pure conjecture however, as the only ones who really know anything are those at Xbox and Nintendo that made the deal (if there was ever a deal to be made).