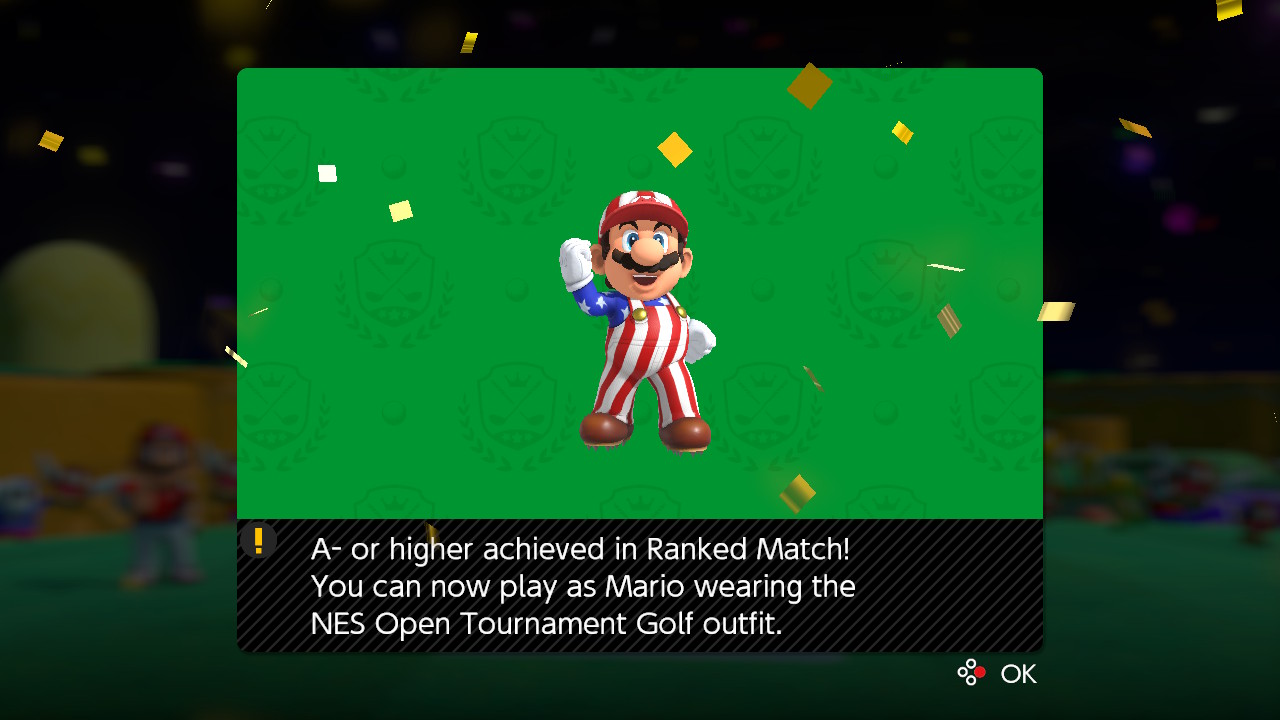 Long before there was ever Mario Golf: Super Rush, there was NES Open Tournament Golf, an amazing sports game that famously depicted Mario wearing striped red and white overalls, complete with matching hat.

Mario’s star-studded look was always an impressive sight and has gone on to receive plenty of love in recent years, making an appearance in Super Mario Odyssey and now, diehard Mario fans have the chance to earn it in Mario Golf: Super Rush. Available as a Ranked Match reward for the month of January, fans hoping to unlock this outfit can do so by achieving a rank of A- or higher in Ranked Matches.

The NES Open Tourament Golf attire marks the latest in a line-up of new visors for Boo, alternate colours for Toad and Koopa Troopa and even Mario’s classic overalls. Best of luck golfers!

A free Mario Golf™: Super Rush update*** includes Toadette, New Donk City, and more! – Tee off as Toadette, who hits the green in the Mario Golf: Super Rush game! Boasting excellent control and cute pink pigtails, Toadette’s excellent at hitting shots with accuracy. Her high control will come in handy on the added New Donk City course—these 18 holes will have you bouncing balls off of buildings and golfing across skyscrapers!

Become a global contender in Ranked Match**…and receive in-game rewards! – In this update, a new ranked mode will be available via the main menu. You can select Standard Golf or Speed Golf and tee off with 3 other players*. Depending on your performance, you’ll earn points that increase your rank (and boost your ego). Reach a certain rank each month to obtain special character variants, like different colors for Yoshi and more!

Another free update*** brings additional characters, new courses, and more! – The shell-shielded Koopa Troopa and nimble Ninji dash (and glide) across the green in the latest free update to the Mario Golf: Super Rush game. Koopa Troopa can make the ball bounce several times and Ninji can use Glide Dash and float over opponents on the way to the next hole. Chill out on the snowy Blustery Basin course as you navigate mountains and avoid blizzards. Stay sharp on the Spiky Palms course, a desert oasis with plenty of perilous points. Take it easy or give yourself a challenge with the newly added ability to change the CPU skill level!