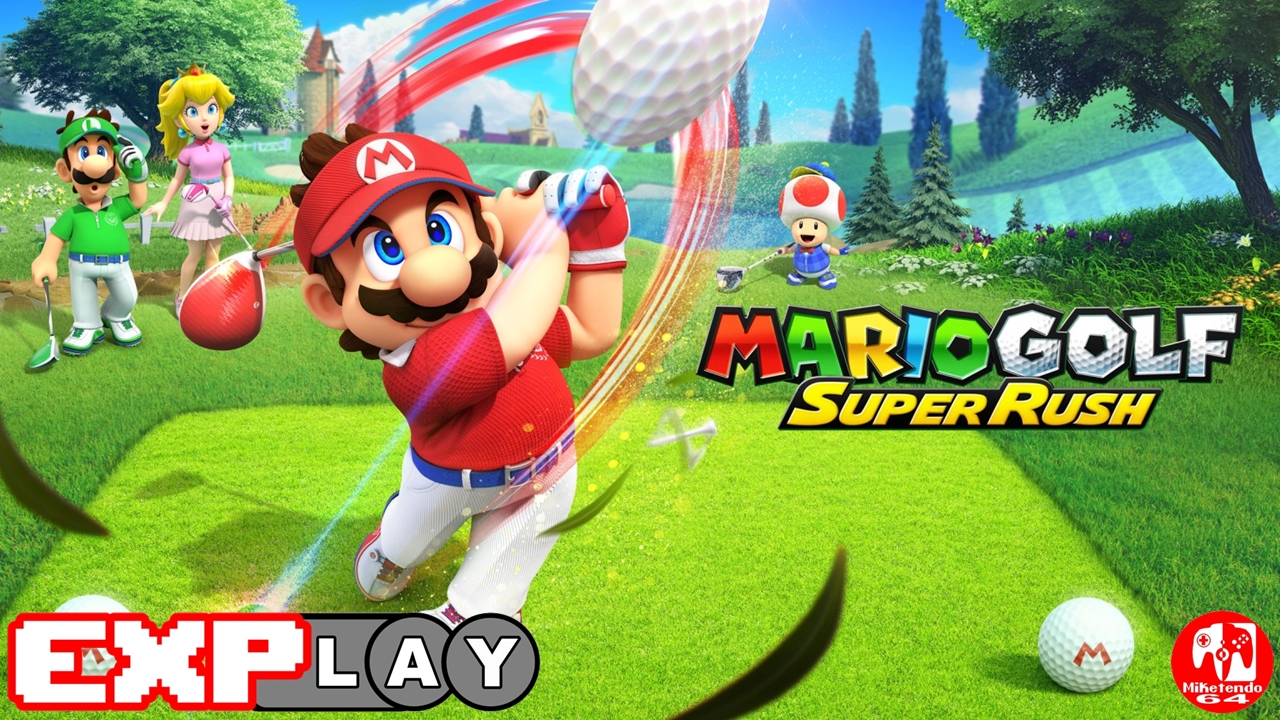 Welcome to EXPlay,(Explain & Play) the review series where we care not for scores but tell it how it is when it comes to every game we get our hands on, whilst also taking the time to include some lengthy gameplay, to give you the reader, the chance to shape your own impressions and views whilst watching and reading. In this installment, we’re covering Mario Golf Super Rush by developer Nintendo.

Mario and friends tee of against one another in perhaps their most chaotic game of Golf yet! Mario Golf Super Rush pits players against each other to get their ball in the hole not only in as few turns as possible but who can do it the quickest. From the moment you take your first swing, you must race to where your ball lands and swing again whilst knocking over any of the other players who get in your way.

Mario Golf Super Rush has four different game modes: Standard Golf, Speed Golf, Battle Golf, and Golf Adventure. Golf Adventure is a single-player campaign that has the player use their Mii Character to take role of a novice golf player who must learn the ropes and become a golfing pro. As you take on each challenge set before you, Players will then be able to use their Mii Character in other game modes (along with their improved stats).

Speed Golf and Battle Golf offer more diverse and entertaining ways to play golf by making it much more competitive and introduces new challenges and obstacles. Battle Golf for example takes place in a special arena and includes obstacles like Thwomps and Chain Chomps that can impede your progress but can also be used to your advantage to impede the other players too. The Banana balls and Bob-omb balls can be swung at other players to cause further obstacles and distractions for them.

So, what about the characters that you can play as? Mario Golf Super Rush has a base roster of 16 characters including the usual suspects like Mario, Luigi, Peach, Daisy, Toad, Donkey Kong, Bowser, Yoshi, Wario, and Waluigi. The rest of the roster (including new characters to the series) is made up of the likes of Bowser Jr, Charging Chuck, Boo, Rosalina, Pauline, and King Bob-omb.

Each character has their own special shot and special dash that can affect other players and their balls in a myriad of ways. Daisy’s Special Shot for example, can blast other player’s balls in different directions upon impact. Luigi’s Special Dash allows him to ice skate across the course at great speed and anyone who follows close enough behind him will slip over on the ice.

Up to four players can play together either locally or online. Players can also choose to play with button or motion controls as well as choose the dominant hand of their character (Righty or Lefty).

Mario Golf Super Rush is a golf game like no other. It make have fewer courses than other Mario Golf titles but it more than makes up for it with its entertaining game modes. Nintendo has stated that they will continue to update the game periodically with new stages and characters so it will be interesting to see how much more content will indeed be added.

Mario Golf Super Rush does feel like a more more well-rounded game compared to Mario Tennis Aces (at least when it first came out). It’s unique spin on Golf makes it fun and entertaining enough even for players who don’t really play Golfing games.