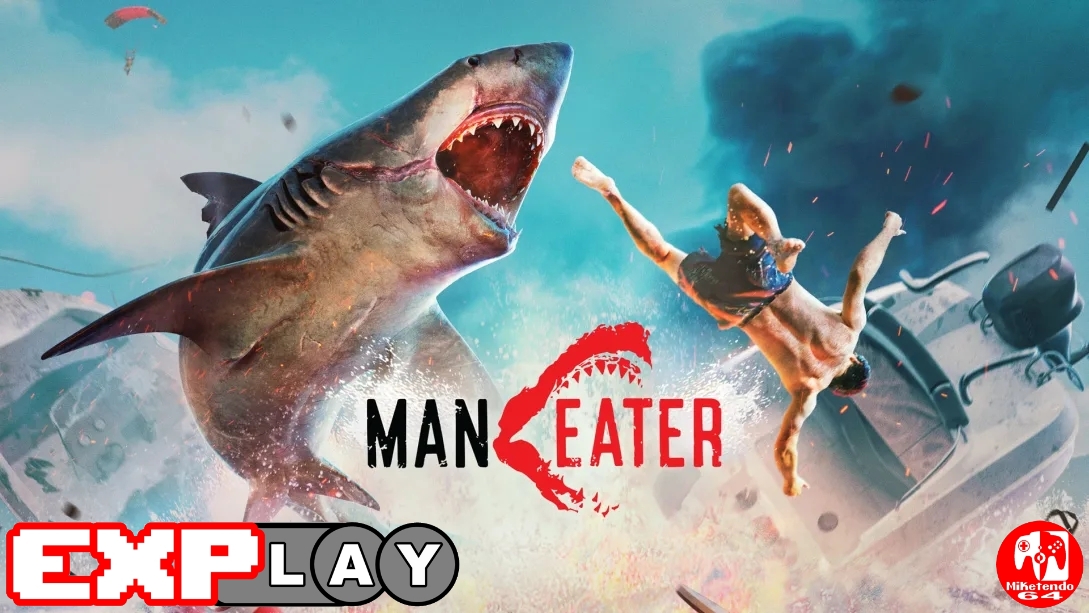 Welcome to EXPlay, (Explain & Play) the review series where we care not for scores but tell it how it is when it comes to every game we get our hands on, whilst also taking the time to include some lengthy gameplay, to give you the reader, the chance to shape your own impressions and views whilst watching and reading. In this instalment, we’re covering Maneater by developers Blindside Interactive and Tripwire Interactive.

Going to need a bigger boat? You most certainly will as far as Maneater is concerned, a graphic aquatic role-playing game that gives players control of a deadly bull shark, with an endless hunger and an expansive menu to digest. Developed by Blindside Interactive with Tripwire Interactive, Maneater is the third-person adventure that begins with an adult bull shark that is quick to wreak havoc as part of the game’s opening tutorial, only to have everything go horribly wrong.

Sharkhunters are quick on the scene and it’s not long before notorious cajun shark hunter, Pierre “Scaly Pete” LeBlanc (and son Kyle), catches the shark and upon gutting her, discovers she’s pregnant. Scaly Pete swiftly marks the young pup in a specific way, so as to identify her when she’s much older, only to have the shark break free, rip his hand off and end up in the water. Only, with the pup free and back into the water, by no means is the last players will see of the shark hunter.

Set up as the antagonist whose hatred for sharks is bound to become worse as certain events unfold and the young pup eventually becomes a “mega.” On the lighter side of things, there is also a film crew accompanying Scaly Pete and his son, and a narrator who can be heard throughout by the name of Trip Westhaven. Trip is voiced by none other than Archer’s Chris (voices Cyriil Figgis) and also doubles as the host of Maneaters vs. Sharkeaters, an in-game reality show.

When not dealing with Scaly Pete, the majority of gameplay, which takes inspiration from many games such as Jaws Unleashed, The Legend of Zelda: Breath of the Wild and Dark Souls, players are free to steer their shark through the open-world setting of  Port Clovis, which conveniently is made up of eight regions.

As players explore, their baby shark (now you have the song stuck in your head), is free to snack on any prey players can possibly encounter, but be warned, some prey will attack back, especially when they are orcas, alligators, sperm whales and alligators. Yet, to make things even deadlier, there are special apex predators that pose even more of a threat when you encounter them.

Players are free to try their luck and take them on as soon as they encounter them, forcing themselves to master the predator’s attack patterns and counter them brilliantly, or you can avoid these fights for as long as possible, just until you’ve managed to eat, explore and evolve as much as necessary, to make your shark just as deadly as the big prey you wish to digest.

Only, in order to reap the benefits of evolving, players will need to level up often and often return to grottos, small safe harbours where players are free to customise their shark with new abilities and powers, upgrade the skills you’ve unlocked already and access newly unlocked customisations that will reward your shark with new appearances and abilities.

Incidentally, killing the apex predators can also reward the player for doing so and just in case you tire of doing all that is required to advance in the game’s story, there is plenty to discover in the form of landmarks, caches and licence plates. The best thing about this intriguing shaRkPG, however, has to be its graphics. I absolutely love the look and textures in each region and the transformations that your shark can undertake, are absolutely worth the time and effort it takes to acquire them before you can utilise them.

Despite repeated performance issues on Switch, in the form of frame rate drops, sluggish actions and load times, Maneater is a really enjoyable game. By no means would the scuba diver in me like to be in the water with a shark of this brutal calibre, at the end of the day, the blood-hungry shark in-game is not a true representation of sharks in the real world.

We’re not just a meal to them and they’re not the monsters many in the past have been quick to paint them as, so when you get past this narrative, Maneater is a really fun game that is quick to teach us the rules of nature and survival. Threats can come from anywhere, even when you’re at the top of the food chain, and if you still want more, Summer 2021 will see the release of a new Truth Quest expansion DLC, which offers plenty more threats, locations and evolutions.