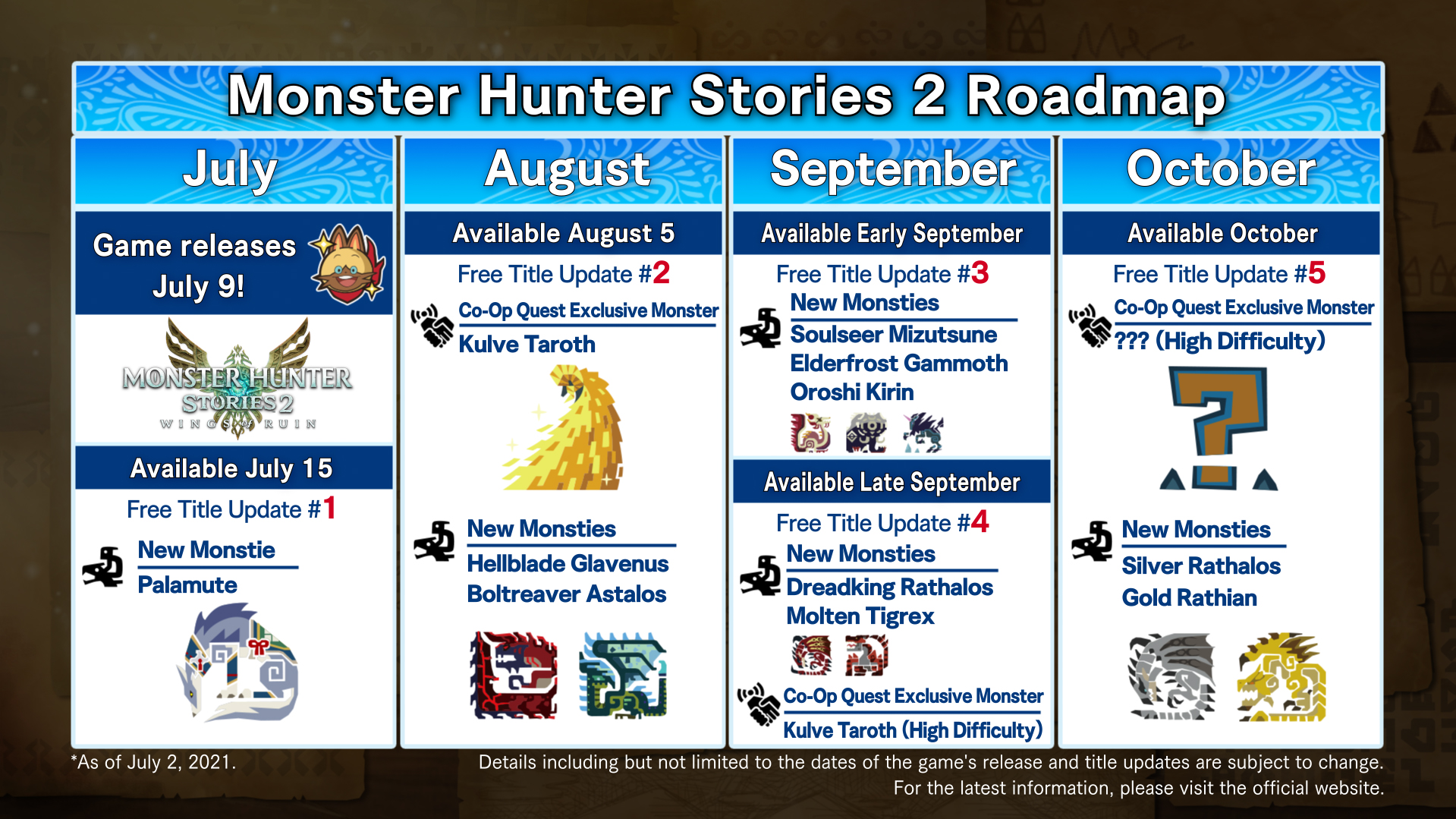 LONDON – July 2, 2021 – Ahead of the highly-anticipated release of Monster Hunter Stories™ 2: Wings of Ruin, Monster Hunter™ series Producer Ryozo Tsujimoto and Director Kenji Oguro offered an in-depth look at the post-launch content coming to the game, showcased co-op gameplay, a new story trailer and more. In addition to the new story trailer providing one final look at the gripping narrative in Monster Hunter Stories 2: Wings of Ruin, the extensive post-launch roadmap also detailed the challenging and rewarding end-game content awaiting Monster Riders after the game’s July 9, 2021 release on Nintendo Switch™ and PC via Steam.

In addition to the already announced first post-launch update, which brings the fan-favorite Palamute from Monster Hunter Rise™ as a ridable Monstie to Monster Hunter Stories 2: Wings of Ruin on July 15, today’s special program detailed five additional free updates coming to the game through October 2021. Title Update 2 arrives on August 5, and introduces the gilded Elder Dragon Kulve Taroth as a new co-op quest for Monster Riders to tackle together. While Kulve Taroth will not be available as a ridable Monstie, materials from her quest will be invaluable for crafting powerful new equipment. This update will also introduce Hellblade Glavenus and Boltreaver Astalos as additional Monsties.

Title Update 3 arrives in early September, and brings Soulseer Mizutsune, Elderfrost Gammoth, and Oroshi Kirin as new Monsties! In late September, Title Update 4 follows on the heels of these exciting new Monsties with Dreadking Rathalos and Molten Tigrex. As part of this update, Kulve Taroth returns in a new high-difficulty co-op quest that offers Monster Riders the opportunity for even greater rewards. In October, Silver Rathalos and Gold Rathian swoop in as part of Title Update 5, which also heralds the arrival of a special mysterious monster, who will be part of a highly difficult co-op quest that offers materials for crafting incredibly powerful equipment.

During the co-op gameplay reveal, Tsujimoto-san and Oguro-san provided an extensive look at the many ways that players can collaborate in co-op expeditions, including exploration, strategizing on combat, discovering Monster Dens, selecting eggs, and hatching new and unique Monsties. The duo also sat down to share a behind-the-scenes look at how the original Monster Hunter Stories™ was first created, what they set out to accomplish with a sequel, and their inspiration for the designs of new and returning characters.

In addition to the Standard Edition (physical and digital on Nintendo Switch), Monster Hunter Stories 2: Wings of Ruin also has a digital-only Deluxe Edition. The Deluxe Edition includes a number of cosmetic options. Players can customize their appearance with Razewing layered armor sets and a Nergigante-inspired hairstyle, use the Kuan Coat outfit to alter the appearance of the Wyverian companion Ena, choose between two new outfits for the returning felyne pawtner Navirou, and two sticker sets depicting the various characters that players encounter during their journey.