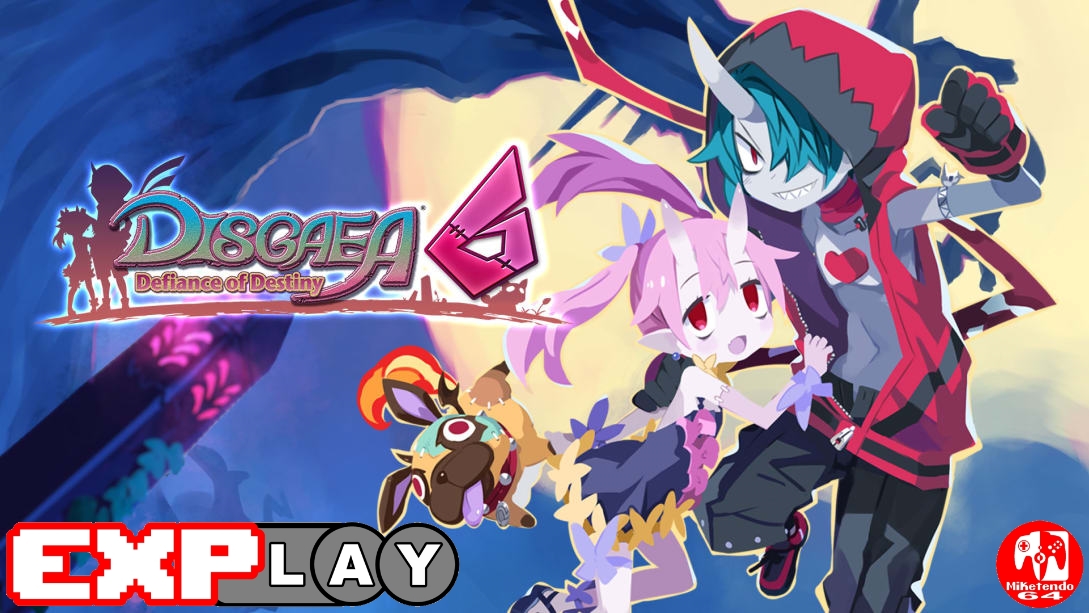 Welcome to EXPlay, (Explain & Play) the review series where we care not for scores but tell it how it is when it comes to every game we get our hands on, whilst also taking the time to include some lengthy gameplay, to give you the reader, the chance to shape your own impressions and views whilst watching and reading. In this instalment, we’re covering Disgaea 6: Defiance of Destiny by developer Nippon Ichi Software.

Disgaea 6: Defiance of Destiny: (The Explanation)

Ever since its initial instalment (Disgaea: Hour of Darkness) first released in 2003, as a video game series, Disgaea has lead an interesting life. Consisting of multiple games in addition to remasters, ports, spin-offs and main titles, developer Nippon Ichi Software have invested a lot of time, money and effort in Disgaea and to date, their efforts have been worth it and the latest game in the series, Disgaea 6: Defiance of Destiny, a brand new SRPG, is continued proof of this fact.

Although Disgaea was never really a series that saw its games released on a Nintendo platform, everything has changed since the launch of the Nintendo Switch. From first getting Disgaea 5 Complete, many more titles have since followed, such as Disgaea 1 Complete in 2018, Disgaea 4 Complete in 2019, but now 2021 sees the release of a brand new instalment. [Editor’s Note: While not main series games, Disgaea spin-offs Prinny: Can I Really Be the Hero? and Prinny 2: Dawn of Operation Panties, Dood! released on the Nintendo Switch in 2020, available separately or together as Prinny 1•2: Exploded and Reloaded.]

While it is true Disgaea 6 saw a dual release on PS4 and Switch earlier this year in Japan, as far as a western release is concerned, Disgaea 6 is only planned for Switch currently. Wait, what? Yes, that is correct. As far as the newest instalment goes, Disgaea 6 is currently a Switch exclusive as far as the west is concerned and this is not the only new first for the series as there are some other fun facts we’ll be covering as we talk about the game.

First and foremost, although the likes of Disgaea 5 Complete first released in 2017 and was actually a Japanese launch title for the Nintendo Switch, Disgaea 5: Alliance of Vengeance initially made its debut in 2015. With Disgaea 6 coming on the scene in 2021, it marks six years since the release of the last main series entry and is the biggest gap to date, since previous titles released much closer together.

Speaking of Disgaea 5: Alliance of Vengeance/Disgaea 5 Complete, our readers might be pleased to know that, whilst naturally featuring a brand new story for players to follow, Disgaea 6 actually reuses a few of ideas and gameplay mechanics from the previous title, making for a smoother transition between going from one to the other. Not everything made the cut though as sub-class weapons are gone. Nevertheless, Nippon Ichi Software by no means settled for simply copying their previous homework, but set about improving a lot of the previous features, introducing some new interesting gimmicks and really upped their game when it comes to 3D models.

While it’s true  Nippon Ichi Software have utilised animated 3D character models for some of their other games, Disgaea 6 marks the first time 3D models were used in a Disgaea title, thus doing away with what they did previously, which was utilising HD sprites for every in-game character, as seen in earlier titles. Their level of game design has been taken to a new level as well, as their work with different colour palettes, really stands out and features some originality, but still ties in with the graphical art style we have all come to associate with Disgaea games.

Moving away from art to heart, Disgaea 6 is a love story of sorts regarding a zombie named Zed and the lengths he’ll go to for the ones he loves, which in his case, is constantly doing battle against the most powerful God of Destruction ever known to exist and frequently falling in battle. It’s okay though, with the power of Super Reincarnation on his side, Zed can avoid death altogether and carry on with his quest, getting stronger after every failure, until one day, one hopeful day, he can set things right.

As he will soon learn though, like the Disgaea protagonists that have come before him, he can’t do it alone, so luckily for him, there is a colourful cast of characters on hand to help him. They’re quirky, they’re flirty, they’re annoying and one of them is over 10,000 years old, but they’re exactly the ensemble Zed will need should he wish to prevail. Just don’t go expecting the story to end as soon as you reach the credits though, as being a Disgaea game, there is post-game content and players will be happy to know there are plenty of extra cutscenes and dialogue to go with it, with all of the game’s voice talent bringing some extra oomph to the game.

Something that really impresses me about Disgaea 6, more so than its previous titles, is just how far it goes as a game to reward its players. While it can seem a little daunting at first, especially when the more you play, the more you realise just how much content it’s packed with, how many episodes and acts it consists of and how intricate gameplay and character stat improvement and development, at the end of the day, Disgaea 6 is a game willing to show loyalty to those willing to play it.

The more you put into this game, into its Super Reincarnation system, obtaining D-Merits, utilising Squads, making the most out of Research and the Juice Bar, or just adventuring in the Item World, the more the game is going to give you in return. More power. More weapons. More bills to pass and more useful functions to make the most out of. All of these are things the game is willing to provide for your continued support and leisure and the greatest gift of all has to be the auto-repeat and auto-battle functions.

If you are struggling to advance in the game’s main story, there is nothing stopping you from returning to an earlier stage you have beaten and replaying it over and over again. With each character’s AI in effect, or their Demonic Intelligence set up to the player’s liking, you are free to grind levels with ease and, you won’t even need to pay attention to your Switch. You’ll easily be allowed to walk away, to carry on with some housework, actual work, go out or even go to sleep and check on your Switch in the morning.

As long as the Switch is docked, or in handheld mode but with the plug connected, your characters will just keep on battling, thus earning you more mana that can be used for things such as improving skills, learning new evilities, and passing bills at the Dark Assembly. More HL for spending on helpful items and so much EXP points that you can easily go from Zed being a level 1 zombie, to a level 9,999 powerhouse. What’s more, as you earn more multipliers, speed up effects and stat boosts, your characters will clear stages even faster and level up at an alarming rate that you’ll soon be able to advance at ease.

What all of this means is, as a series, Disgaea has never been as accessible as it is now. Disgaea 6: Defiance of Destiny is a strong instalment that proves Nippon Ichi Software have learned a lot over the decades they’ve been working on this series. It’s also a game, whilst the story might seem weaker in comparison to earlier titles because of its familiar nature and outlandish silly tones that seem to get sillier with every game, despite the swearing and insults, Disgaea is on the up and up as a series and Disgaea 6 does a great job of pulling it up to new heights never before reached.

Disgaea 6: Defiance of Destiny: (The Gameplay)