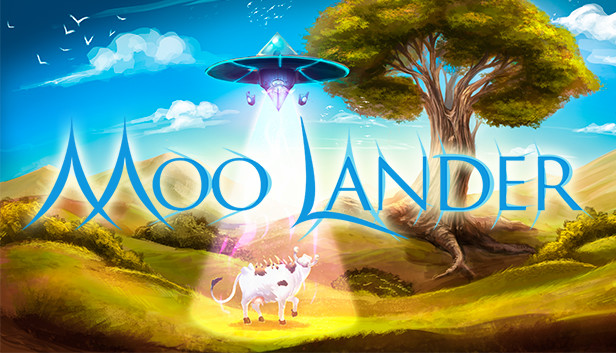 Moo Lander is an oddball – that much we can say. Made with the Unity engine, this new platformer is all about ancient Cows, strange creatures and a civilization of Landers. The developers themselves like to call it “a platformer without any platforms”, which means exactly that – the player actually flies in his spaceship all along the big open world sections of the game. So no jumping on any platforms, but plenty of combat with different creatures and a boss battles with The Mighty Cows, as well as challenging environmental and physics puzzles all along the way. So did we get your attention yet? Let’s delve deeper into the rabbit hole!

Needless to say – milk is an essential part of the game, both in regards of gameplay mechanics, art style and lore. It is a resource, an end goal, a narrative device, it is even part of some of the active abilities, but more on that later. As the most precious and powerful resource in the galaxy, the Landers are after the milk for powering all their tech. This is seen during the gameplay and as the story unfolds. The players learn more about the civilization of these space beings, how they use it, the history covering all of it – the works. One can definitely see how the developers have their entire idea around the use of milk. And if you want milk, you got to have a cow, right?

“If you want milk, you got to have a cow”

If the milk is the cake of Moo Lander, then the cows are its cherry on top. In order to get that milk resource, you got to find the cows and beam them to your home planet. In order to do that, the player must first defeat the Ancient Mighty Cows! These are the boss battle of Moo Lander – at the end of each adventure path there is a boss Cow and an epic battle awaits. The cows themselves are several types, each with a unique look, abilities, moves, and overall theme. And they are not easy, let me tell you! Enter Moo Souls.

The Sixth Hammer game studio draws heavy inspiration from the Ori series, Rayman and Earthworm Jim, to name a few. And indeed, one can feel and see the Ori influence all over Moo Lander – beautiful landscapes, detailed level design, some very witty puzzle designs. Everything a platformer fan would like is here. Add to that some original milk effects and particles, and you can truly immerse yourself in an odd little mix, combining space cows with ancient technological civilizations.

What is a fun game without the cool stuff to amaze you, get your interest, make you feel good about yourself? Moo Lander offers some crazy ideas in terms of milk-related gameplay – abilities like the Milk Saber (a giant sword made entirely out of milk), the Mooriken (imagine a shuriken made of… you guessed it – milk), and a special shield, powered by the milk. Add to that a special camouflage module mechanic (a fresh take on the skins system which is mandatory for many such games) that gives you some passive bonuses when you equip a certain flaying saucer skin you just unlocked from killing a number of certain enemy type, and there you have it! Good old-fashioned platforming fun. Oh, and let’s not forget the local couch co-op multiplayer with several different modes, like PvP, PvE, and PvCow. The players can even take control of the cow bosses and play as one. How cool is that?

Moo Lander is set to release in Spring 2022. It will be fully digital on Steam, PlayStation 4, Xbox One and Nintendo Switch. If you want to know more about Moo Lander and The Sixth Hammer in general you can visit our website – http://moolander.com and let’s not forget the game’s Steam page here – https://store.steampowered.com/app/1080040/Moo_Lander. There’s also a free demo available for download, so you can try out the game right away!