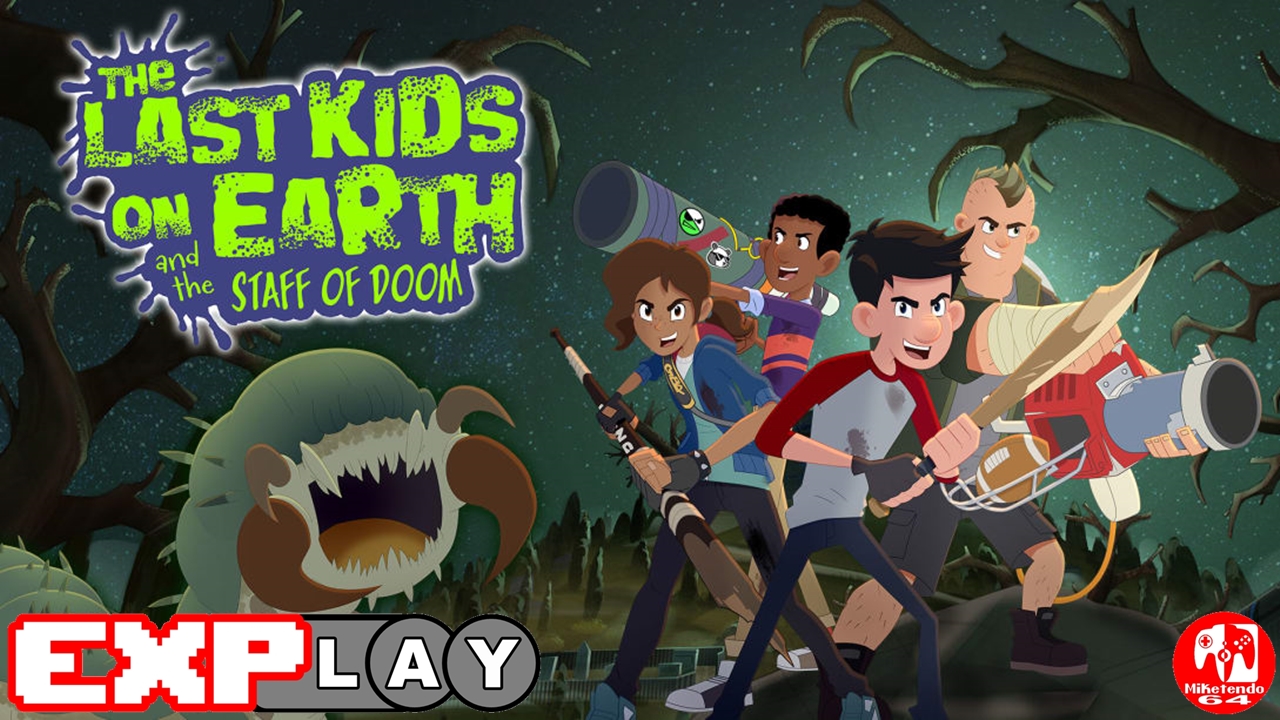 Welcome to EXPlay, (Explain & Play) the review series where we care not for scores but tell it how it is when it comes to every game we get our hands on, whilst also taking the time to include some lengthy gameplay, to give you the reader, the chance to shape your own impressions and views whilst watching and reading. In this installment, we’re covering The Last Kids on Earth and the Staff of Doom by developer Stage Clear Studios.

The Last Kids on Earth and the Staff of Doom: (The Explanation)

The Last Kids on Earth and the Staff of Doom is an all new story based on the characters and Universe of the books and Netflix show. Jack and his friends Quint, June and Dirk are the last known survivors of the apocalypse who must survive from zombies and monsters alike. Not all monsters are bad of course, some are much welcome allies and pretty friendly too, even if their appearance says otherwise.

During a routine visit to Joe’s Pizza an unknown monster barges in and attacks another called Bardle who is wearing an amulet. The amulet is broken during the attack and the pieces of the amulet scatter across the town of Wakefield, Massachusetts. Jack and his friends offer to find the pieces of the amulet and teach the asailant a lesson. It is revealed that the asailant is none other than Malondre who is working to summon Rezzock to Earth.

The Last Kids on Earth and the Staff of Doom is an isometric, open-world action game that is akin to the likes of Diablo. Players my explore the town of Wakefield and complete a series of objectives whilst finding loot. As they do, they will come face to many different enemies, both large and small. Most of the enemies feature in the books and the series but there are even new enemies that were created especially for the game.

Each character is armed with either a melee or ranged weapon. Jack and Dirk are brawlers and good for dishing out damage at close range. June and Quint possess ranged weapons and are good for crowd control and picking off enemies from a distance. All characters have a light attack, heavy attack, special attack, and a summon. The light attack is the weakest but also the quickest and can be used indefinitely. The heavy attack does more damage but it is slower and consumes stamina.

Specials are limited weapons that vary between each character and have varying effects. For example, Jack’s Grenade is a boomerang that damages enemies slightly and can leave them dizzy for a short amount of time. Dirk’s special can freeze enemies to the spot, giving ample opportunity to wail on them with a heavy attack.

Each character can summon a monster unique to them to help them in combat. For Jack, it is his faithful monster dog Rover. For June, she can summon Biggun. Each summon is only temporary but they can be exceptionally handy in a pinch and as you defeat enemies, you will be able to fill up the summon gauge and use it again.

Up to four players can play couch co-op with each player as choosing any one of the four characters. If only one player is playing, they can swap between characters at special statons in the game. As you defeat enemies, you can gain experience to level up. It is worth noting that levelling up is related to the player, not the character so regardless of who you are playing, your level will remain the same.

The Last Kids on Earth and the Staff of Doom also features weapon and armor upgrades for each character but you will need to find blueprints for them first. These can found in chests all over Wakefield but not every chest has a blueprint in them. A lot of them contain scraps which are also needed to actually make and upgrade weapons and armor. Of course, these are the only things that can be upgraded. The Treehouse and even Big Mama can also upgraded too.

Speaking of Big Mama, you can drive around in it throughout most of the town, except in areas that are blocked off with traffic barriers. You can call Big Mama at designated stations that are usually found just outside of the traffic barriers. Big Mama does make getting around the place a lot quicker but there is also a fast travel option in the form of Wormungulous that can take you from places you have already visited back to the Treehouse and vice versa.

Online Multiplayer is not available for the game just yet but a content update will release at a later date to patch it in. It won’t feature cross-platform play though so you will only be able to play with those who have the same platform as you (in this case, the Nintendo Switch).

The Last Kids on Earth and the Staff of Doom: (The Gameplay)