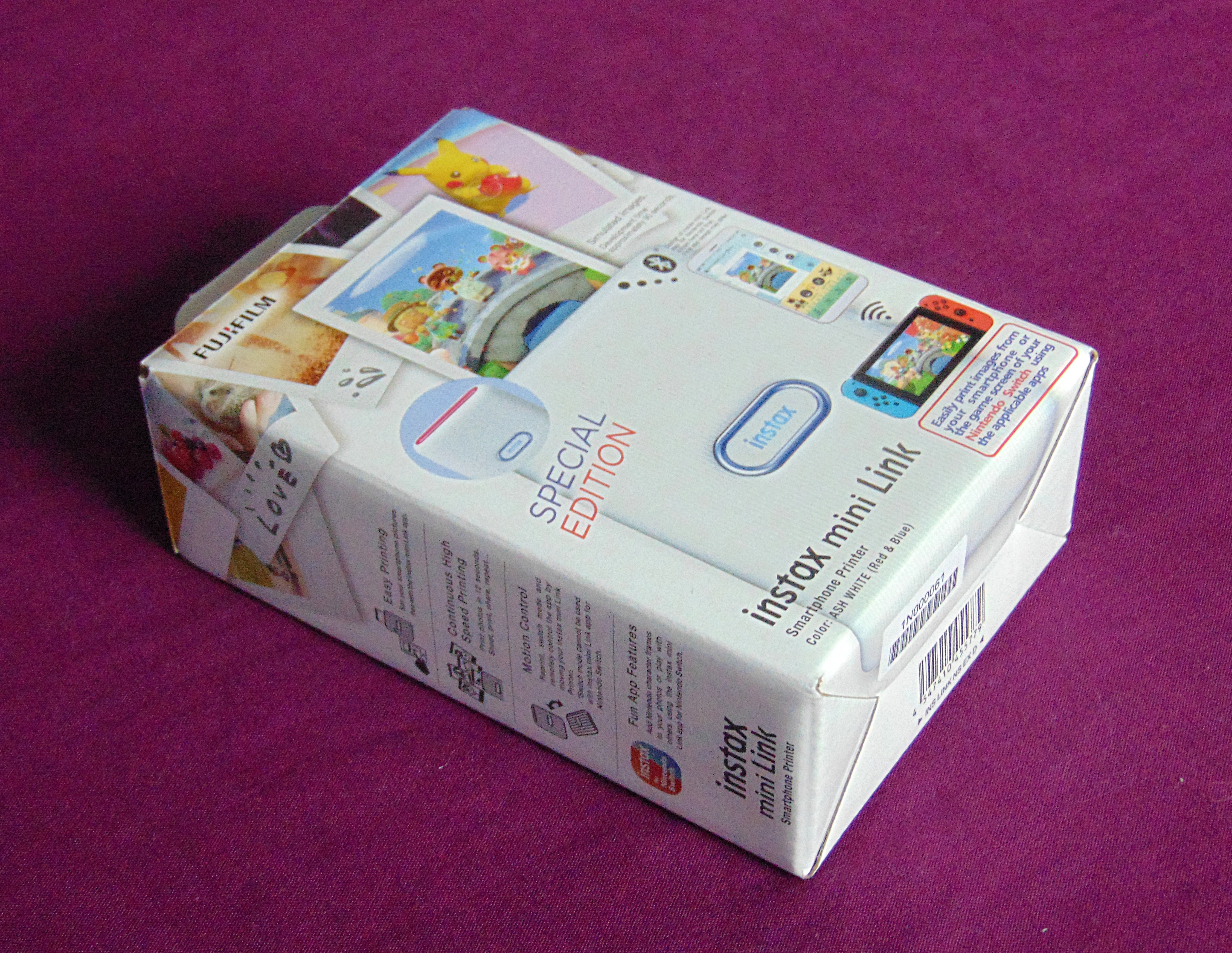 The Fujifilm Instax Mini Link SE (Special Edition) released recently to coincide with the release of New Pokémon Snap on Nintendo Switch. It is part of a collaboration between Fujifilm and Nintendo. We were lucky enough to get our hands on one of these printers thanks to Instax UK sending us a loan model. For this feature, we will be talking about how it compares and differentiates from other Instax Models on the market.

The Instax Mini Link SE model is white with red accents around the print-out slot and blue accents around the Instax logo and device button. The packaging also features Nintendo motifs and images from Nintendo games. There is also a leaflet inside the packaging that details how to install the Mini Link For Nintendo Switch app on your smart device. Other than that, there is not really anything else that makes it different from any of the other models.

The Mini Link Printer connects to your smart device through the app via Bluetooth. It can print out your photos and screenshots onto credit card-sized film that comes in a cartridge packed with 10 film. The film is not included with the printer so you will have to purchase it separately. You can buy the film for around £15/$15/€15 for a pack of two cartridges, depending on your country’s conversion rates and VAT. The film itself can come in a myriad of designs and colors but the most economic is, of course, the standard white border film.

The Instax Mini Link SE (and standard models) all come with a USB cable to charge the printer’s internal battery from any USB outlet. This means that when the printer has a charge, you can take it with you and use it anywhere. The printer’s small size allows for it to be conveniently carried in a backpack, satchel, or handbag without taking up too much space.

The Instax Mini Link SE is actually a pretty cool gadget and being able to print your favorite screenshots or even the photos on your phone is such a nice novelty. On paper, it looks to tick a lot of boxes. It has a sleek design, it’s lightweight, it’s highly portable, and does what it is meant to… print photos. However, the biggest setback for the printer is its price. The Instax Mini Link SE and standard models are priced around £115/$120/€120 on most online retailers including Amazon.

For folks that already own one of the standard Mini Link Printers, you really won’t be getting anything extra with the Special Edition except the Nintendo Switch-themed box it comes packaged in. On the other hand, if you don’t already own an Instax Mini Link Printer and are looking to purchase one, the SE edition is very similarly priced to the other models and we do like its color design over the other models.

A Special Pikachu bundle is also on its way sometime later in May that includes the Instax Mini Link SE and a silicone cover that is molded in the form of Pikachu. We expect the bundle will certainly sell units because who can resist that adorable electric mouse? Scalpers sure won’t. Unfortunately, a fixed release date has not been given for it yet, nor has a price point been revealed.

The Instax Mini Link SE is a very novel device and the ability to print out my favourite Nintendo Switch screenshots within seconds is such a winner for me. Photography and underwater photography are both hobbies of mine and I am sure to get a lot of use out of this printer as it is not restricted to just printing screenshots. It can be used to print any images that you have on your smart device.

The photos that you print out, don’t have to be mere display pieces either. My brother Mike has given some of his photos the extra functionality of being amiibo by attaching NFC tags to them. If you would like to know more about that, you can read his feature about it here.

I sincerely hope that you find this feature on the Instax Mini Link SE printer informative and that it may help you in your decision-making to purchase one for yourself or for someone else as a gift. At the time of writing this article, both the SE and standard editions of the Printer are temporarily out of stock on Amazon storefronts in the US and UK. They should be in stock again soon but it looks like the release on New Pokémon Snap and Nintendo’s recent collaboration with Fujifilm has made the Instax Mini Link Printer quite popular again.