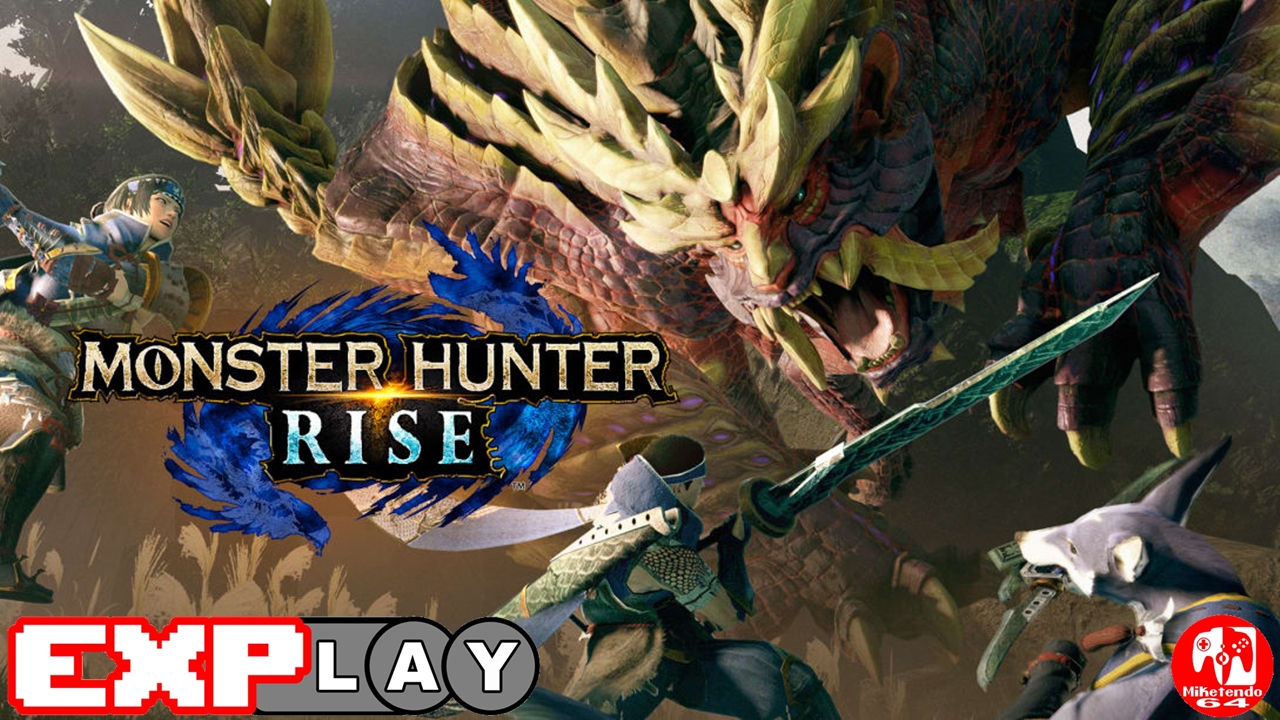 Welcome to EXPlay, (Explain & Play) the review series where we care not for scores but tell it how it is when it comes to every game we get our hands on, whilst also taking the time to include some lengthy gameplay, to give you the reader, the chance to shape your own impressions and views whilst watching and reading. In this installment, we’re covering Monster Hunter Rise by developer Capcom.

Monster Hunter Rise is the latest installment in the Monster Hunter Franchise by Capcom and is a Nintendo Switch exclusive. The player takes control of an avatar of their own creation and must track down and hunt massive beasts either on their own or with a group of friends. Up to four players can work together either online or via Local Wireless, be it close friends or complete strangers. The goal is still the same though, Work together, hunt, win!

The main premise is that you take on quests and requests and fulfil them. The nature of each quest can differ somewhat. Some can be as simple as acquainting yourself with and environment (Expedition Quest). Others can have you hunt and slay a particular monster(s) and some quests will have you collecting certain items and materials (Gathering Quest). As you complete quests, you will earn experience that will allow you to level up and increase your rank. As your rank increases, you will be able to undertake tougher quests and challenges.

When you begin the game, you will start as a recently accredited Monster Hunter of Kamura Village. You have basic armor and weapons and you must hunt monsters so you can use their pelt, hide, and other materials that you can gather in order to make your weapons and stronger. In turn you will be able to hunt stronger monsters and improve your weapons further.

Speaking of weapons, there are 14 categories from Great blades to Bowguns. You are given a great blade to begin with but you can change your weapons by using the item chest in the center of the village. You may find that while heavy weapons are good at dealing damage, they can be slow to use and not very appropriate for fighting swift monsters. The Dual Swords on the other hand, are much quicker to use but do smaller amounts of damage. That said, at least you are more likely to make contact with them against the likes of the Izuchi than you are with the Great Sword.

When hunting on your own, you will be joined with a trusty Felyne companion who will hunt alongside you. Felyne Buddies are somewhat of a staple to Monster Hunter games and can be a great help by doing damage to monsters as well and can even plant healing plants to help you restore health. They aren’t the only companion to join you on your travels either. Monster Hunter Rise also introduces a new buddy called a Palamute.

These Canine creatures (or Canyne as referred to in-game) also assist you on hunts by attacking enemies but can also serve as mounts as well, meaning you can ride them to make travelling long distances shorter. Both Palamutes and Felyne companions have there own weapons and armor that you can forge to make them stronger in battle. This in turn will undoubtedly turn your team into a force to be reckoned with, especially against weaker enemies.

Some other new features introduced to the game are the Wirebugs and Wyvern Riding. The Wirebugs are special insects that allow you to zip up or across the terrain kind of like Spider-Man. They can also be used to perform special attacks that can bind monsters, depending on the weapon that you are using as each have their unique attacks. On large monsters, you may even put them into a bind state that will allow you to ride them. Wyvern Riding is a only temporary but you can use the beast that you have wrangled to attack other monsters and even launch them into walls or other monsters to deal extra damage to them.