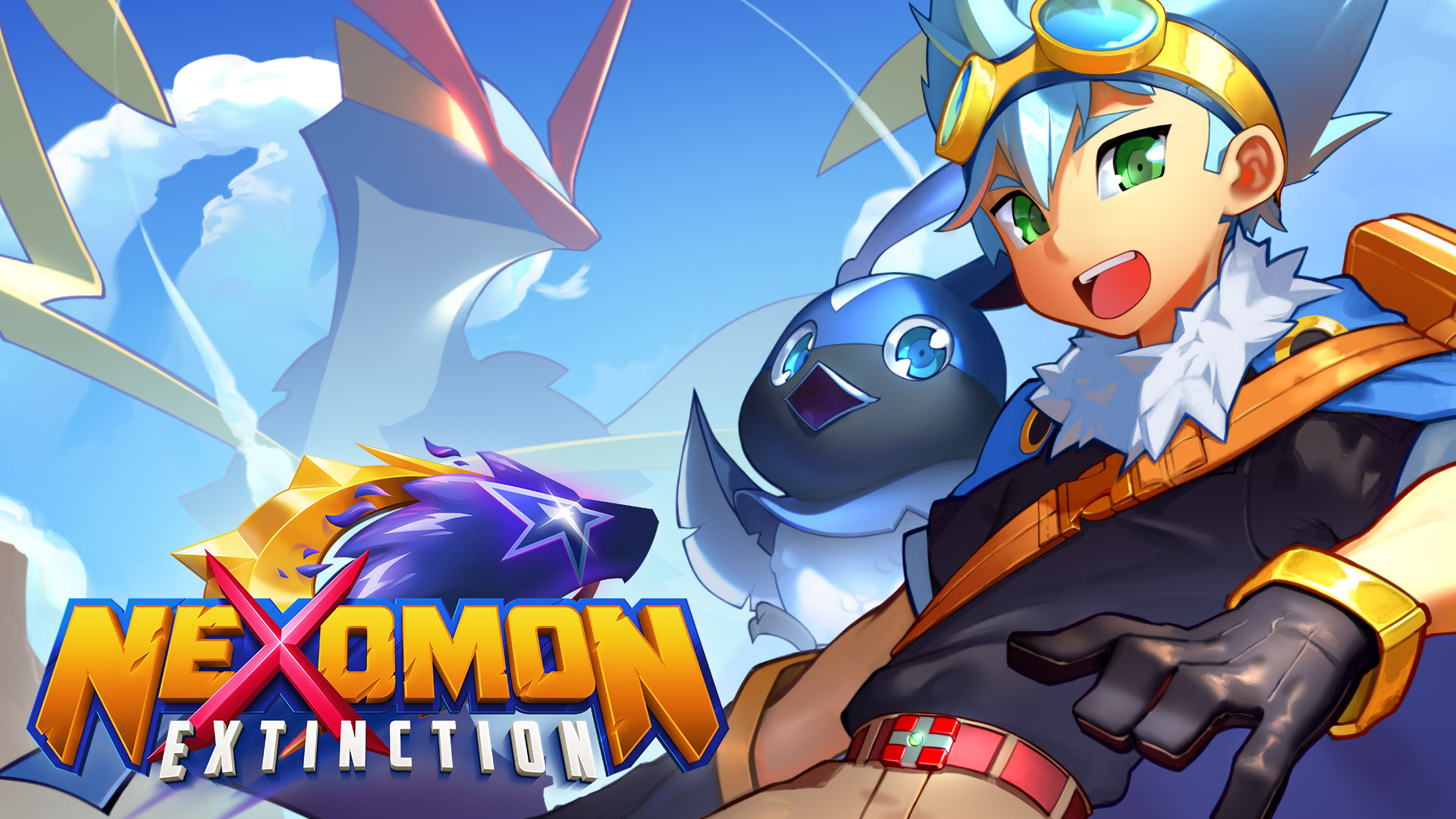 Nexomon is an RPG game that released on mobile devices in 2017. Inspired by the likes of Pokémon, Nexomon tasks players with the role of a Tamer that must fight and capture monsters called Nexomon. The game received mixed reviews on Google Play, mostly due to the poor advertising about the game being free to play and suffering from crashing. The Steam version, on the other hand, received a much more positive reception from players.

Nexomon: Extinction is a direct sequel to Nexomon. Developed by VEWO Interactive and published by PQube, the game was announced for Nintendo Switch on January 10th, 2020. It released later that year on the console and on Steam on August 28th, 2020. The game was given a visual improvement over its predecessor with an updated HD art style. The core gameplay mechanics, however, stayed true to the original game.

Nexomon: Extinction takes place after the events of the first game but prior experience is not necessary to understand the sequel. The game takes place in a world where creatures called Nexomon and people coexist in relative harmony. Many years ago, there was a war between Nexomon and humans. The King of Monsters, Omnicron, tried to cause an uprising and rally the Nexomon to wipe out Mankind.

A group of heroes among the human race banded together and overcame Omnicron by taming Nexomon and getting them to fight alongside humans as opposed to against them. Humans and Nexomon worked together to defeat Omnicron and were victorious. With the Nexomon free from the reign of their king, they could coexist with humanity once again.

However, generations later, there seems to be a new threat upon the horizon that threatens the extinction of humankind once again. This means that a new group of heroes must rise up and stop the impending danger. One of those heroes is you. A Nexomon Tamer who must put together a formidable team of Nexomon capable of fighting against Nexomon and Tyrants alike.

The game’s story may seem like one that has been told differently many times before but the inner plot lines and story arcs are rather interesting. All of the main and side characters are amusing and Coco, your companion in the game, is not afraid to speak his mind and say aloud what the player themselves may well be thinking. They are fully aware that they are inside a video game and will point out a lot of RPG tropes that in real-life rarely make sense but happen anyway. Coco is such a plucky character. I enjoyed their interactions and found them to be very likable (and did I mention that they are a cat? No? Well, yes. Coco is a talking cat).

Nexomon: Extinction is a monster fighting and capture RPG game similar to that of the Pokémon series which it is heavily inspired upon. You take the role of a Guild Tamer who fresh out of the Tamer’s Guild, must embark on a quest to tame Nexomon and have them fight for you. There are 381 different Nexomon to catch and train though you can only have six of them in your party at any one time.

Nexomon comes in all shapes, sizes, and types. There are fire types, water, ghost, psychic, etc. Each type has an advantage over some types and a weakness towards others (sound familiar?). Knowing which Nexomon is better suited to fight against an opposing Nexomon is key to beating your opponent in battles.

As you engage in battles with wild Nexomon or Tamers, you will have a list of options to choose from. You can attack from a selection of moves that will consume stamina relative to the amount of damage they do. You can use items and even swap out your current Nexomon for another in your party. Upon success in battles, your Nexomon will earn experience and level up. They will also become stronger and learn better attacks to use in battles. Some Nexomon can even evolve into other more powerful forms after reaching a certain level that will help you fight even stronger Nexomon.

While Nexomon: Extinction is mostly about catching and training, uh I mean ‘taming’ creatures, the player can take on side quests to help NPC characters. As a Tamer, it is your duty to help other people with their own issues. You can take on missions and side quests by talking to characters that have a yellow star icon above their heads.

Some side quests can be simple like trading particular items or Nexomon or more time consuming like escorting a miner to a frozen mine or clearing out a town from rampaging Nexomon. You will usually get a reward of some sort that will make the sidequest somewhat worth it.

During your travels, you can obtain items that you can use to improve your Nexomon or increase your chances of catching Nexomon. Collecting whistles of a certain type will increase your chances of catching a certain type of Nexomon (Water Whistle – Water Type). You can also collect cores and attach them to Nexomon to improve their stats or the amount of XP they can earn in battles. Every Nexomon has four core slots and at any time, cores can be attached and removed as and when you need them.

In the towns and at outposts, you will find a healer who can return your party to full health. You can usually find a terminal nearby that will allow you to make changes to your team with other Nexomon that you have caught. Speaking of catching Nexomon, I should really talk about how to do that. Catching Nexomon requires using Nexotraps. You can throw Nexotraps at wild Nexomon in an attempt to catch them. More often than not, you will need to whittle their health down to weaken them and make them easier to catch. However, other parameters must be taken into account that increase your chances of a successful capture.

A Nexotrap will only have a certain amount of success in catching a Nexomon. You can improve your chances by giving the wild Nexomon food that it might like, which in turn will make it more willing to be caught. Special Nexotraps that are specific for certain types like fire, water, or ghost, for example, will also improve the chances of capture. To top it off, you will also have to input the onscreen button prompts in quick succession correctly otherwise the wild Nexomon may escape the trap.

Nexomon Traps and most other items can be purchased from merchants, from shops, or found in chests and other places. Items include potions, elixirs, and status effect cures to help keep your party in fighting form. In shops, you can only acquire certain items if you have a high enough tamer level. You start out the game as a Bronze rank Tamer but as you fulfill quests and progress through the game, you will be able to improve your rank to silver and beyond.

Nexomon: Extinction has a charming enough soundtrack but it may not be considered catchy enough to be ‘memorable’. Each region in the game has its own particular background music with some songs being more energetic than others. Unlike in some games that can have a tiring soundtrack that you would rather listen to your own music, I didn’t mind the music in this game and found it rather enjoyable.

One thing that I feel is missing in this game is some voice acting. I know it would be a lengthy affair (with so many characters and side characters in this game) but I do feel that voice acting between the main cast would have felt a bit more engaging. Even if the voice acting was limited to a few lines or words like in the Shantae games, I would enjoy the interactions with characters a bit more.

I will just come out and say it. Nexomon: Extinction is a very nice looking game. The colorful visuals, the HD graphics, and the general layout are superb that it is what every 2D Top-down RPG should look like. I really can’t fault the game on its appearance as the upgrade to HD has really made Nexomon: Extinction pop.

Even the Nexomon themselves are cleverly designed and look original yet somehow familiar. There are a fair number of Nexomon in the game where you look at them and think, “Oh, they look like this character from that particular game.” On the flip side, there are some that have interesting designs like one that looks like a little grim reaper!

Nexomon: Extinction runs surprisingly well on Nintendo Switch. My experience with the game has been very smooth and loading times like transitions between areas and regions are very short. Even loading the game from the main menu screen takes very little time, meaning you can get straight back into the action.

Okay, so I have made it this far through the review without making too many comparisons to Pokémon games (patting myself on the back for that). Of course, it is now time to give my observations of Nexomon: Extinction. Many will see the game as a blatant Pokémon rip-off and they are not too far wrong with their initial thoughts. The game is very much a carbon copy of the Pokémon formula from catching critters and training them to fight other characters in Nexomon battles.

Nexomon: Extinction does make some changes to the formula to make it just different enough while not too different. For starters, you are followed around with a companion who talks on your behalf (you are a silent protagonist after all). Catching Nexomon is more in-depth that several parameters must be taken into account like weariness, if they are given food, or affected by a status effect. You also have to input button commands to administer a catch and it could still not be enough.

You also can’t battle with other players online or otherwise. Nexomon: Extinction is a single-player affair and after beating the game, there is no real need to continue training your team except to finish off any side quests that you may have missed. On top of that, all 381 Nexomon are found in a single game including the 9 Starter Nexomon can be caught later in-game. This also means that you can’t trade Nexomon for any that you are missing with other players. So even though Nexomon and Pokémon are very similar in terms of gameplay, there are features in Pokémon games that the Nexomon series do not use.

Nexomon: Extinction could be considered a lonely gamer’s Pokémon that doesn’t require friends in order to “Catch them all!” It actually has a lot of depth in regards to story and is more than happy enough to do its own thing with gameplay that many gamers are familiar with.