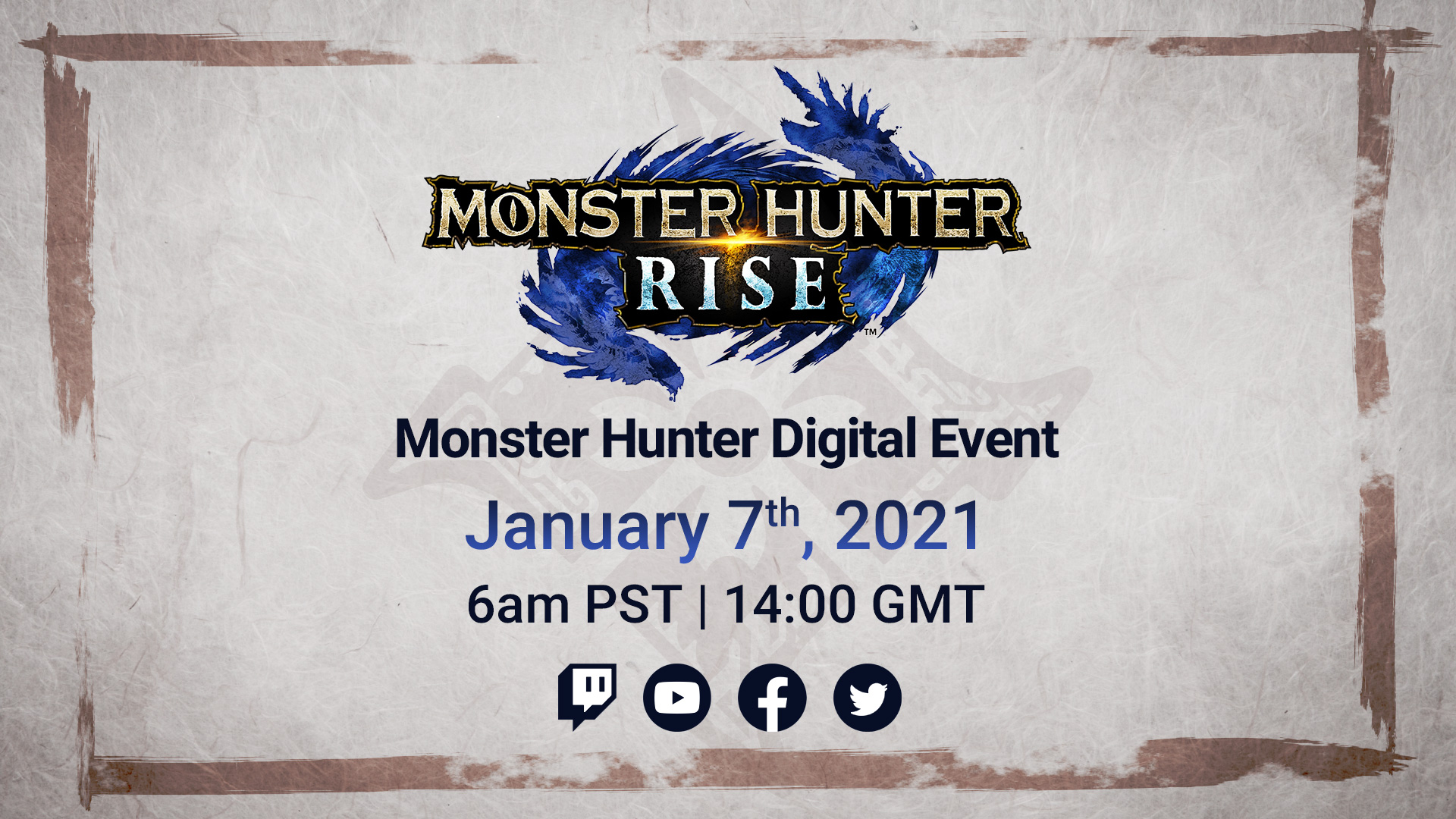 The Monster Hunter Rise Digital Event streamed earlier today and provided plenty of new information about the game and showed plenty of gameplay as well. It featured plenty of familiar beasts like the Great Baggi, Lagombi, Khezu, and Barioth. A new monster was also shown, the icy beast Goss Harag who makes itself at home in the snow-covered Frost Islands. Monster Hunter Rise will be having a new feature introduced called Wyvern Riding. As the name suggests, you will be able to wrangle Wyverns and ride them. You can even use them to attack other monsters.

The biggest takeaway from the Monster Hunter digital event is that a playable demo was announced. The Monster Hunter Rise demo will be available to download for a limited time starting January 8th and ends on the 31st. Four game modes are playable within the demo and will feature both online and local wireless multiplayer with all 14 weapon types available to use.

If you have yet to see the Monster Hunter Rise digital event, you can find it, as well as additional information, in the official announcement below.

7th January, 2021 – During the “Monster Hunter Digital Event” today, Capcom shared new details for Monster Hunter Rise, the upcoming entry in the award-winning and top-selling Monster Hunter action RPG series. Beginning tomorrow, on 8th January, and offered throughout the month of January, a Monster Hunter Rise demo will be available as a free download from the Nintendo eShop for Nintendo Switch, serving hungry hunters around the world their first taste of the highly-anticipated new entry in the storied franchise. Also showcased in the livestream event, a brand-new trailer introduced the “Wyvern Riding” gameplay mechanic, a new monster, a collection of returning monsters and frosty new hunting grounds that players can explore when the full game launches worldwide for Nintendo Switch on 26th March 2021.

The free limited time Monster Hunter Rise demo launches tomorrow, on 8th January and ends on 31st January, giving players ample time to enjoy a sampling of this all-new Monster Hunter experience. The demo provides players with numerous hunting options, including offline solo and (up to 4 player) offline* local and online** multiplayer gameplay using all 14 weapon types. The following modes and quests are available in the free demo***:

Also revealed today, the icy Goss Harag is an entirely new monster that will make its debut in Monster Hunter Rise. This fanged beast will send a chill down hunters’ spines, as he roams through snowy fields in search of new prey and attacks using blades of ice. Goss Harag is right at home in the Frost Islands, a new snow-capped and windswept locale that was once the nesting grounds for large dragons, who only the bravest hunters would attempt to slay.

Many other classic and fan-favorite monsters will be returning to join the ever-growing roster of foes in Monster Hunter Rise. In addition to the previously-announced monsters, these seasoned threats will also make their presences known: Lagombi, Khezu, Great Baggi, Barioth, Mizutsune, and Tigrex. More new and returning monsters will be revealed in the months ahead.

Monster Hunter Rise is an action RPG that will transport players to the colorful Kamura Village, which attracts visitors with its unique culture and innovative hunting technologies. After hunters equip their armour and select from one of the various weapon types, all-new hunting grounds await, including the ancient Shrine Ruins, Flooded Forest and more. The debut of the new “Wirebug” mechanic allows for wire-based grappling actions that can be used to scale cliffs and other hard-to-reach areas, providing new traversal and aerial attack options. The game will also debut new hunting partners called Palamutes, personalized and rideable “Canyne” companions that will provide players with a new set of attack options, while “Felyne” Palicoes will return as support characters for actions like healing.

As Monster Hunter Rise players defeat monsters and progress through the game, items from fallen foes can be used to craft unique weapons and armor that will increase their chances of future success and survival. Hunters can tackle these challenges solo, or with up to three other players in local or cooperative online play, while also taking advantage of the versatility of the Nintendo Switch system, which allows for hunting anywhere, anytime and with anyone.