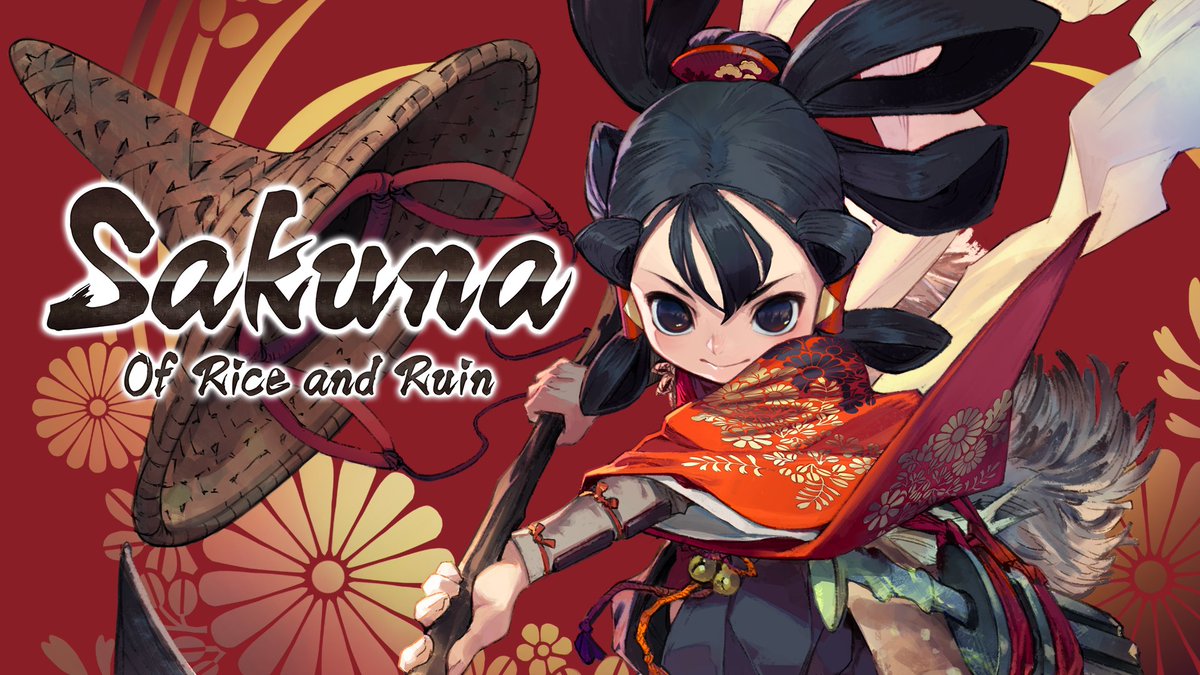 December 2, 2020 1:18 am Published by Mike Scorpio Leave your thoughts

Sakuna: Of Rice and Ruin is developed by indie game developer Edelweiss who is known for their highly acclaimed game Astebreed. The game was shown during E3 back in 2018 and had a playable demo booth at Gamescom and EGX in 2019. Both our editor, Jack & myself had the opportunity to play the game last year thanks to the Marvelous folks at Marvelous who are publishing the game.

Now another year later, we are in 2020, and Sakuna: Of Rice and Ruin is now available to play on Nintendo Switch as well as other consoles. The most important thing after all the time is; has the wait been worth it? Read on to find out.

Sakuna: Of Rice and Ruin is inspired by Japanese Mythology but with its own unique twists. The game follows the story of a proud and quite bratty young goddess called Sakuna. She is the daughter of the great Warrior God Takaribi and the Goddess of Harvest. One day, a group of humans who have escaped their world known as the Lowly Realm, stumbled across a bridge that took them into the Lofty Realm where the Gods reside.

As they arrive in the Lofty Realm, they find themselves in divine garner where food, oil, and alcohol for the Great Goddess, Lady Kamuhitsuki, has been stored as offerings. Sakuna finds the humans inside the storeroom and chases them out but not before the storeroom catches fire and destroys the offerings.

Lady Kamuhitsuki blames Sakuna for what happens and banishes Sakuna, her loyal servant Tama and the humans to an island inhabited by demons. If Sakuna wishes to return and prove her worth to Lady Kamuhitsuki, she must rid the demons from the island. Why the great goddess has such interest in the island is a mystery to Sakuna but the answers will unveil themselves in due course.

The story is much deeper than it may first appear. We are given a protagonist who is spoiled by her birthright and is not very likable. It is a welcoming contrast to most other games with a more preferable protagonist. Watching Sakuna develop into a more humble and appreciative character makes for a much more rewarding story and the relationships that she builds with the other characters all the more heartwarming.

Sakuna: Of Rice and Ruin features two types of gameplay that are intertwined with one another. One part of the game is 2-D action platforming that has Sakuna exploring areas to find materials whilst fighting demon creatures. The other part is a farming simulator that is all about rice cultivation and its importance. The two genres may seem farfetched to have in a game together but Edelweiss has found a way for the two to co-depend on each other.

As you go out exploring, you can find materials and ingredients that can be used to create weapons, food, and give properties to the rice you are growing (more on that in a bit). The areas you visit each have their own layouts with platforms to traverse that can lead to secret areas with hidden items.

Demons will emerge to attack you and come in the form of animals like rabbits, sparrows, wolves, etc. You can fight back against enemies by using your weapons that just so happen to be farming tools. The Y button is your quick attack and the X button is your strong attack. You can combine attacks to dish out damage but be warned that you cannot block attacks to defend yourself.

Sakuna can jump and use her scarf called the Divine raiment that can attach itself to walls, ceilings, and enemies. Sakuna can then pull herself to whatever her scarf has attached itself to like a grappling hook. When used on enemies, Sakuna will actually swing herself behind them. This is ideal against large and slow enemies as they are unable to reach you until they turn around.

There is a clock of sorts in the top right corner of the screen that lets you know the time of day and the season that you are currently in. This is important to keep an eye on as when night falls; enemies become much stronger and can kill Sakuna easily. Should the sun begin to set, it is wise to travel back home to the settlement where Sakuna, Tama, and the humans have sought shelter.

The settlement is where basic amenities like a field, storeroom, and the main house where everyone can share a meal together, can be found. The field is where Sakuna must grow rice in order to increase her power and learn special skills. After all, as the daughter of the Harvest Goddess, the source of her power is in harvesting. Every passing day through each season, there is almost always something to do to tend to the rice plants.

This can be anything from spreading fertilizer, removing weeds, releasing the water level, etc. Just before Winter arrives, your rice should be ready to harvest and left out to dry before you can separate the rice from the plant which will, in turn, increase your stats depending on how beneficial the yield was.

Sakuna: Of Rice and Ruin has a number of things that players can do to expand their playing experience. While foraging for items and exploring each area of the game, there are a number of objectives that you will need to complete. This will allow you to increase your explorer level and permit you to venture to other areas. You can also find key items like scrolls and treasures in each area that can grant you new abilities and skills. They can be well hidden though so you will be coming back to each area again and again to find these secret items.

The game has an interesting mechanic for regaining health. Unlike in most games where you pick up food items or use potions to regain health, in Sakuna: Of Rice and Ruin, you will only regain health as long as you do not have an empty stomach. If you lose all of your health, you will restart the stage area you are currently exploring and everything that you have collected will need to be collected again. If you find yourself low on health, you can simply leave the area and return home to rest. You will then be back at full health again and ready to get out exploring and defeating demons again.

As well as the main quest, there are a number of side quests to involve yourself in. Completing them can open up new features like a forge and a loom. These amenities will allow you to craft stronger weapons and different clothes that give you extra perks to fighting or farming, as long as you have the materials need to craft them.

In the game’s pause menu, you can check your staus, inventory, equipment items, and listed quests among other things. If you ever lose track of what your current objective is, you will find it in the Quests section. Quests are broken into three parts and you can only have one highlighted at a time but you can still do the other quests at the same time.

Sakuna: Of Rice and Ruin has a very charming soundtrack with plenty of oriental influences. When exploring away from home, the music is adventurous and energetic. When at home, however, the music is much slower. It is more peaceful and relaxing.

The game features some voice acting for the main cast, though it is mainly reserved for movie cutscenes. As regards conversing with NPC’s, the voice acting becomes limited to a few lines of dialogue or even grunts and groans. This isn’t too much of an issue for me and reminds me of the Shantae games that do a similar thing regarding dialogue between characters.

Sakuna: Of Rice and Ruin uses an anime style for its visuals but opts for a more natural color palette rather than being overly vibrant. The character design is also very reminiscent of Japanese cartoon tropes like the large and loveable oaf, the spoiled princess, and the all-knowing servant who is a god in his own right but reduced to being the retainer to another.

The performance is very good on Nintendo Switch and seems to run seamlessly. The visual effects look great and the lighting effects are amazing. It always impresses me how well some games can run on the system and it is commendable how good the game looks and runs on Nintendo Switch. During my time with the game, I didn’t find any bugs or experience crashing and it felt smooth to play in both Handheld mode and Docked mode.

Sakuna: Of Rice and Ruin is most definitely a game that I had my reservations with when I first played the demo back at EGX 2019. The Side-scrolling adventure part was fun and engaging but when I heard about the farming simulation part of the game, I was a bit put off by it. I will admit that I am not too keen on farming simulation games as I find the gameplay monotonous and not fun at all.

Upon playing this game, I have garnered a newfound appreciation for the art of cultivating rice. The amount of effort that goes into tending to the rice in-game, pales in comparison to actually doing it in real life. The next time I have a rice dish, I will be sure to enjoy every grain.

That aside, the combination of both side-scrolling platforming action and the farming simulation is surprisingly one that works well. Even more so when the two complement each other. You have to venture out to get materials to add to the fertilizer, which in turn will grant you much better crops at harvest. The harvest will then improve your stats and make you stronger, allowing you to defeat tougher enemies.

How the day and night mechanic affects monsters and makes exploration tougher is very intuitive. I struggled with it in the beginning, as I had to go back and forth multiple times to the same area to fully explore it. I suppose that is the intention of the whole mechanic so that players couldn’t advance further than what the game’s story would let them.

I found that the more I played Sakuna: Of Rice and Ruin, the more addicting it became. I would tell myself that I will only play for a short while and low and behold, I am still playing hours later. The fact that this review has taken me so long to get around to writing it is proof enough that I would sooner be playing the game as opposed to scribing a review for it. Alas, I have managed to put the controller down long enough to pen the review to this enjoyable game.