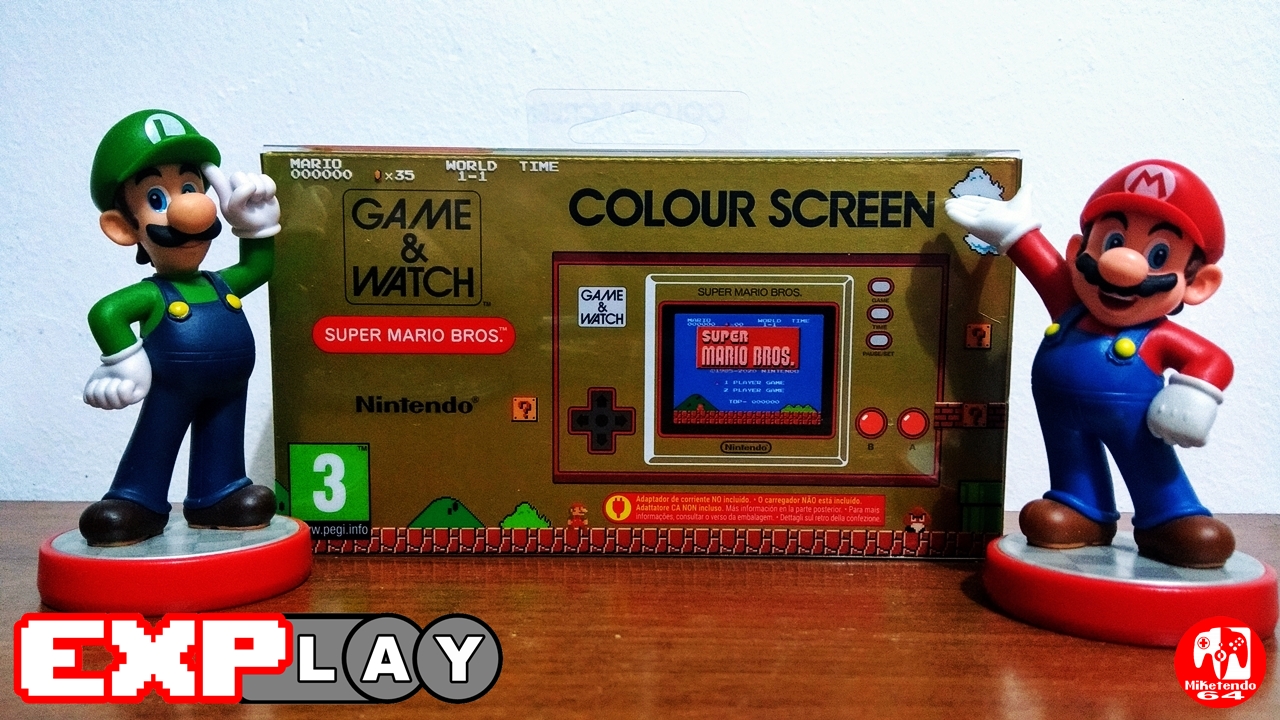 Hey folks, welcome to the feature series we call “EXPlay.” A series of feature articles where we share our experience on games (and consoles) we’ve recently played in the form of written views and captured gameplay footage. To kick off this installment, today we’re all about GAME & WATCH Super Mario Bros by Nintendo.

The console itself is modelled over the one of the many designs of the original GAME & WATCH, and uses a red and gold color scheme. For all intents and purposes, it may look retro but the technology inside is anything but retro. It has a full-colour screen for starters whereas the original GAME & WATCH consoles only had a monochromatic screen. The new console also has a USB-C port so you can charge it and comes with a USB-C to USB cable so you can plug it into any USB to mains adapter.

Where most GAME & WATCH Systems only had a single game built into them, the GAME & WATCH Super Mario Bros. has three. The games are Super Mario Bros., Super Mario Bros 2: The Lost Levels, and a Super Mario version of Ball. All games play just like they do on the original NES console but have the added benefit of being able to suspend a game, play another one and come back to the first and continue on from where it was suspended.

There is also an added benefit to play from the first stage of any of the worlds you have unlocked previously. If you managed to reach world 7 for example and lost all your lives on 7-3, you can simply press the B button on the main screen and you can change the number of the world that you can start on as long as it is 1-1, 2-1, 3-1, 4-1, etc. I must point out that it will only work on worlds that you have reached. You won’t be able to go straight to World 8-1 if you haven’t beaten the castle on World 7-4.

Well that is the game part out of the way but what about the watch? The GAME & WATCH Super Mario Bros. also has a fully working clock to tell the time. You have to set it first to match your regional time but after that, as long as it has a charge, it will maintain the time. The time screen itself also has its own Super Mario Bros. theme with Mario and even Luigi, running across the screen. When the time changes, Mario or Luigi will jump up to hit the block of numbers to change them. The console also has a nice little feature of showing some cute artwork just before the console enters sleep mode.

The GAME & WATCH Super Mario Bros. is a fun little console though it may seem on the steep side when it comes to price. $49.99 for three games you can simply emulate on a smartphone (with a much bigger screen) may be a lot to ask but as a commemorative collector’s item to celebrate the 35th anniversary of Super Mario Bros., it soon justifies itself somewhat. It is worth noting that scalpers are trying to buy them up and sell them at higher prices but don’t be fooled, $80-100+ on ebay is far too much for this console. If you are interested in this console, be sure to check out local retail stores and steer clear of online outlets looking to cash in on the supposedly “limited” stock.

Thank you for reading our EXPlay on GAME & WATCH Super Mario Bros. We hope that you find it useful in your decision in picking up the game for yourself. While there are a lot of hidden gems on the Nintendo Switch and a fair number of duds, we’ll leave it to you to decide whether a game is for you or not.