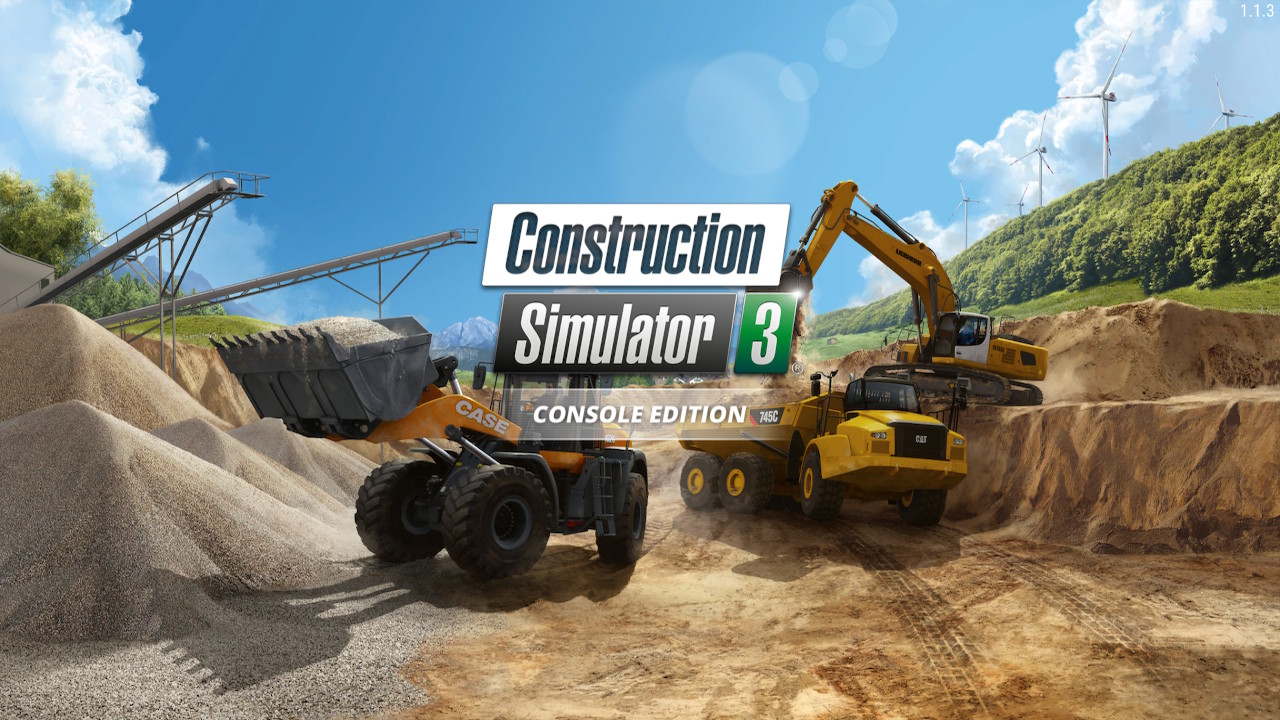 Construction Simulator 3 rolled unto Nintendo Switch roughly a year after the 2nd version of the game on the series which we reviewed previously The game has been released previously on Xbox and PlayStation as well, and now launches on the Switch. While the series has three main iterations, there are also mobile ports of the game on iOS and Android.

The story of Construction Simulator 3 is pretty basic and more or less similar to the previous game. You are an up and coming construction worker, looking to expand into new areas by setting up a new workshop and take on contracts for new work in and around the surrounding towns. As you gain experience, you take on contracts with increasing difficulty, requiring you to rent or buy new equipment as well as invest in the time it takes to finish those tasks. As you expand your skills, you slowly unlock other parts of the map by completing tasks like bridge building and road repair.

Gameplay in Construction Simulator 3 can be categorized by the following: accepting contracts, picking up equipment or supplies, and completing the tasks. Early on, you will not have a lot of money so you either need to take on simple contracts only or rent equipment to complete the tasks you are assigned. These tasks can be as simple as delivering supplies for residents to their homes, or by purchasing supplies you need and taking them to construction sites.

Once you are on sites you may need to dig holes, lift supplies into places marked with blue, pour concrete, lay gravel, pave roads, and more. The projects normally have a few to a dozen steps and will require you to build your fleet towards a large entourage by the end to complete the various jobs. By completing each portion of a job, you will gain funds towards purchasing new equipment and building out your home base. Construction Simulator 3 includes new home base tasks that allow you to expand your base location with shop additions and more. While you complete tasks around town it is nice to see the town build-up from run-down and dilapidated buildings to new construction which you actually completed.

In comparison to Construction Simulator 2, there seems to be more variety in tasks that you will do and new equipment pieces you will amass. While many of the tasks seem repetitive, you will dig a lot of holes, place a lot of pipes, and pour an enormous amount of concrete, seeing the town revitalized under your employee is by far the best part of Construction Simulator 3. The story banter in between bigger contracts between you and your boss is passable as far as driving the story forward, there’s plenty of jokes and puns that fall mostly flat. By the end of the game I mostly just hit the advance button to move the conversation ahead faster so I could get to the next contract.

Construction Simulator 3 has over 50 vehicles by 14 brands of large equipment to help you complete the construction contracts in the game. Each vehicle is detailed and now includes a cockpit view for first-person construction. There are dozens of dozers, front end loaders, concrete mixers, and more that you will need to drive and use at your construction sites. The game also has an upgrade point system, whereas you level up you can spend points to lower the cost of supplies, delivering supplies or equipment, experience points you gain with each job, as well as other areas.

The large map in Construction Simulator 3 also has 120 medals to find which are strewn throughout the world. These medals will award you with money and an achievement if you can find all of them. Speaking of achievements there is a hefty list which you can slowly unlock in-game which adds to pad out the game as well as reward you with doing a variety of tasks, some will happen naturally as you buy equipment or drive a certain distance in the game, though others I found seem to be random like backing up a certain distance in the game.

If there is one area in the Construction Simulator series that needs work, it is in the audio department. Equipment and tools sound passable as far as their in-game audio, but for the most part, the game is dull and silent in the audio department, though there is a music track in the background, which I mostly muted. I did find that since the game is super chill, audio while dull may not be entirely needed, as Construction Simulator is a game that can be played while listening to a podcast or music playlist on Spotify.

Construction Simulator 3 doesn’t really do much to differentiate itself from its predecessor which is sad, seeing as there’s not much going on in the game aside from the realistic equipment and maybe the soil modulation animation that happens which is at least decent to look at and helps you see your progress easily enough as you dig a ditch. Since the game’s visuals look mostly the same as Construction Simulator 2, the game could have been delivered as a DLC pack versus a whole new iteration of the series.

I did notice a lot of loading going on in the game whenever you would pop in and out of the map, as well as when you jumped into a different piece of equipment. Considering you need to view the map a lot to traverse the world and you will do a fair amount of jumping to new equipment, and maybe accidentally using the map, like me, which means you will see the loading screen a lot.

I spent a ton of time in Construction Simulator 2 last year as I reviewed it for the Nintendo Switch. Now a year later, I had a lot of fun jumping back into the heavy equipment dozers and front end loaders and enjoyed my time in the series new location building up my home base and the town around me. If you are looking for a construction simulation game, I recommend Construction Simulator 3.