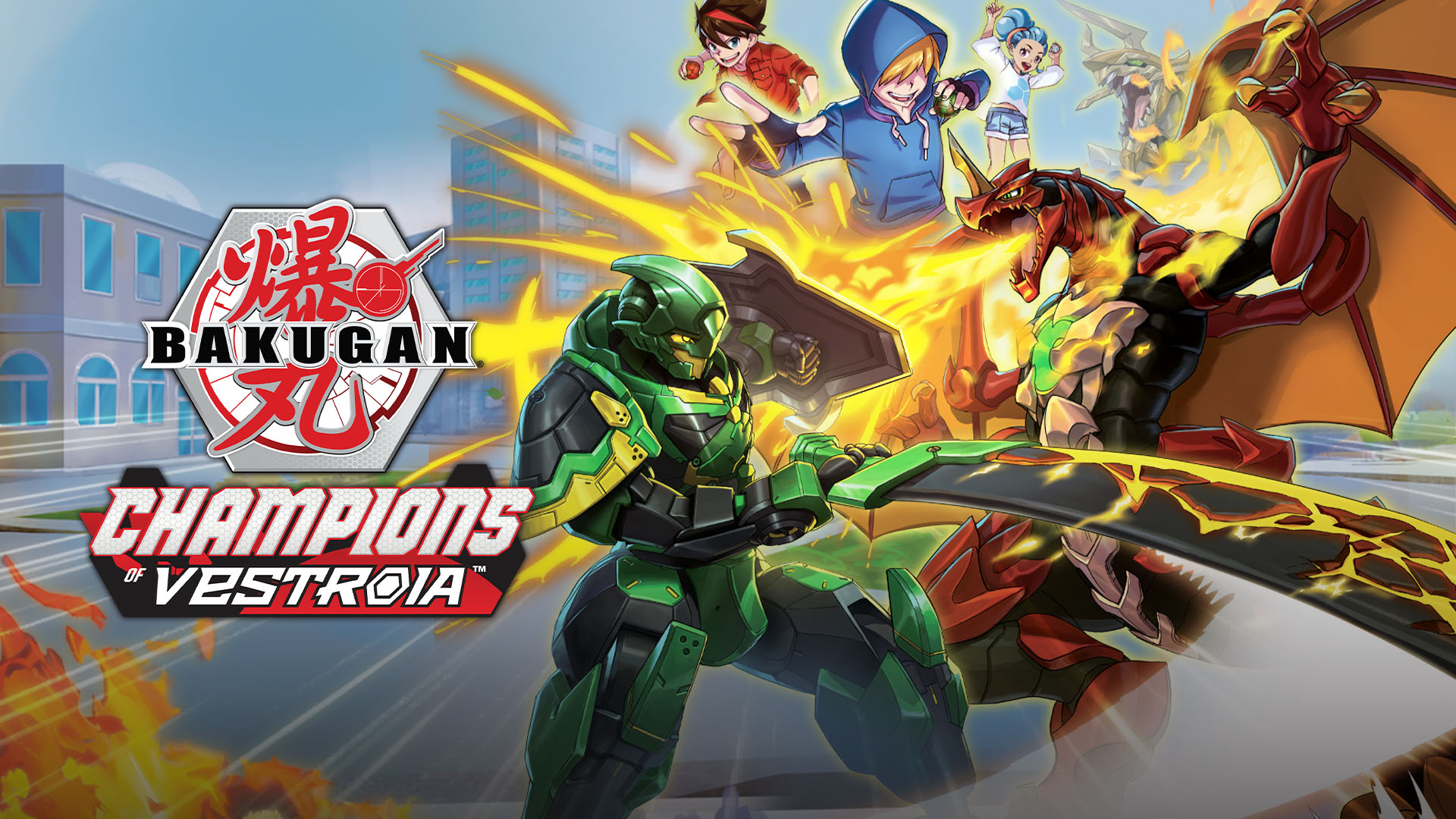 First known as Bakugan Battle Brawlers, Bakugan started out as a Japanese anime that tells the story about creatures called Bakugan and the humans behind them that use the Bakugan to brawl each other, hence the Battle Brawlers name.

Only, while the first series debuted in Japan first, this franchise venture between Sega Toys and Spin Master, actually saw follow-up seasons first air in Canada and the US before airing in Japan, with the fourth series avoiding airing in Japan altogether.

Since it’s 2007 debut, however, Bakugan is a franchise that never just stayed as an anime as it went on to receive its own toy range that children across the globe became very obsessed with and it also got its own manga as well.

Bakugan might not be as popular as it once was, but it’s still here and after a good number of years, we now have a brand new Bakugan video game to sink our teeth into and this time around, Shantae developer WayForward, is in the driving seat and it’s time to see if they can do the Bakugan series proud.

In no connection to the on-screen events of the Bakugan series, Bakugan: Champions of Vestroia, is a game with a story all about Bakugan and one person’s quest to become the best Bakugan Brawler they can possibly be and that “one person” is none other than a customizable avatar for players to take control of.

You can name, customise and alter your character as you wish, but ultimately Bakugan: Champions of Vestroia is a game that tells your story, your adventure into the world of Bakugan and all the things you can do in such an environment. Get ready to battle the best because plenty of tournaments await you and Leonidas wants to say “hey!” as well.

Being the strategic, role-playing action title that it is, Bakugan: Champions of Vestroia is a fairly simple game with minimal new mechanics for players to learn about. When exploring the game’s various locations, X is used for bringing up the game’s map, with A being used for reactions, B for back/leave and the left stick to run wild.

When side quests are prompted, they are a very easy affair that requires very little from the player, as the majority are tedious quests at best. Where things become a little more complex is when playing about your team of Bakugan, selecting which Baku-Abilities you wish for them to use.

The main kind of gameplay you can expect, however, relates to the battles themselves. You can have up to a team of 3 Bakugan go into battle with you, with each one having a health meter viewable on screen and players are free to change Bakugan as many times as they want, but every time you do swap them out with L and R, you will not be able to bring out the Bakugan you’ve swapped out until their cooldown ends.

Each of your Bakugan have four abilities each and you must use these skills to defeat your opponents Bakugan and not all of them necessarily have to be offence orientated, as they can be abilities meant to grant your Bakugan armour, shield them from damage, recover lost health and increase or decrease B-Power.

To use said abilities though, this is where things get a little complicated. Players must run around the battlefield (aka Hide Matrix), collecting Bakucore highlighted by blue hexagonal floor pieces, which once collected, serves as energy to use your abilities and if you maximise energy for all three of your Bakugan, you can then administer a devastating Team Attack.

Then there are also Baku-Gear cores, orange hexagons that spawn, which when collected, help to charge up your Bakugan’s Baku-gear. So, battles are not necessarily the strategic affair you would think them to be, as they’re really just a case of you running around like a headless chicken to the nearest highlighted floor panel and using whatever abilities you have at your disposal in a bid to win. Like I said, the game has minimal new mechanics for players to learn.

Bakugan: Champions of Vestroia is a game of two halves, with one half being a lot bigger than the other half, as Story Mode makes up the majority of the game’s content, with Brawl Online, the game’s option for online gameplay, is served up like a slice of pie on the side.

Brawl Online is rather barebones as it is straight-up a player’s means of battling online against others, with no variety of modes offered, with your online stats recorded for you and players having the chance to rank up based on the number of their victories.

Back in Story Mode, however, this is where Bakugan: Champions of Vestroia has its chance to shine. As players follow the main quest missions, pursuing tournament after tournament, you are free to partake in multiple battles to level up your team, acquire new Bakugan of differing factions (Aquos, Darkus, Haos, Pyrus and Ventus.)

Factions being comparable to Pokémon typings, only with Bakugan, when you get a Dragoniod, you can get one belonging to any of the game’s factions, so if you prefer Darkus Bakugan, you just need to acquire a Darkus Dragonioid and you’re good to go and since Bakugan can be won from battles, story progression, or just found from shiny spots whilst exploring, you’ll soon build up your team in no time at all.

While there is a huge focus placed on battles, there is also quite a bit of content for players to enjoy out of the arenas and that’s made up in a variety of things, such as side quests that can be as simple as finding someone, catching them three times or collecting a specific item.

Side quests are a great way to pass the time, do new things and acquire additional clothing options, on top of the ones you can purchase from stores. Especially since earning B-Coins can take time, so you’re better off saving all your money for useful Baku-Abilities you desperately need, new core cells to evolve your Bakugan sooner or the very useful Brawler Abilities than help turn the tide of battle to your advantage.

Whatever the case, come to Bakugan: Champions of Vestroia for the battles, but do stay for everything else as they will go a long way to increasing the amount of time you will spend with the game.

For the most part, Bakugan: Champions of Vestroia does a decent job of trying to make battles engaging with tunes intended to pump blood, but like a lot of things in the game, they can swiftly become repetitive and if for any reason you end up muting the TV whilst your playing, you won’t be missing much and the rest of the soundtrack isn’t particularly great either.

That being said, at least there is a nice selection of side effects to help make the overall environments sound livelier, what with cars honking, dogs barking and more.

On the visual side of things, Bakugan offers a wide variety of clothing and hair cut styles for your playable avatar, with some very fanciful designs for the in-game Bakugan, but in terms of everything else, let’s just say Bakugan: Champions of Vestroia falls flat on its face.

Don’t get me wrong, it’s a nice looking game, but that’s just it, it’s nice. Instead of being a video game adaptation of the TV series, it’s a game with its own distinctive art style, which just so happens to make it look like it is a Pokémon meets Yo-kai Watch game, made for the Nintendo 3DS.

It’s outdated, uninspired, and the avatar’s face looks creepy. At least every other character is slightly better designed by comparison, but in all honesty, I would rather spend more time exploring the game’s varied 3D environments, rather than be battling 24-7.

It’s great to see the Bakugan taking swings at each other as you’re running around gathering energy, but those hits are just for show and the actual animations for attacks performed aren’t exactly overly impressive to look at.

With regards to performance, the frame-rate is known to dip during some battles, regardless of whether you’re playing in handheld mode or docked and the online battles can be rather spotty, so a good connection is crucial. Worse yet, there are some bugs at play in-game, with some causing side quests unable to be completed.

These bugs don’t seem to affect every save file, as I did begin two other playthroughs just to check this detail out, but for the players wishing to do everything and get everything, if and when you do encounter these bugs, they can stop your progression dead. On top of that, be prepared for some loading screens that will make you what for 10-15 seconds. Then there’s the really rare instances where nothing loads up.

For the few things Bakugan: Champions of Vestroia does right, there is plenty it does wrong and the biggest wrong, has to be the brawls. Don’t get me wrong, everything has been done to make them be as true to the source material as possible, but the appeal just isn’t there.

Although you can teach your Bakugan new abilities and help them evolve, I got tired of the battle system within the first two hours of gameplay and despite giving the story mode many chances to hook me, regrettably, it did not.

My interest had depleted in both the repetitive battles and the game’s plot and once I hit that wall, the enjoyment never returned. I ended up progressing further, for the simple fact of playing the game and experiencing what would happen next.

The only time battles were mildly interesting after that was when playing online, battling the game’s developers and another reviewer who had a review copy. The human touch made a difference, which sadly the AI sorely lacked.

Don’t get me wrong, the AI does get tougher the deeper down the rabbit hole you go, but it’s gradual, with most battles being a case of their Bakugan being slightly stronger and knowing better abilities, but easily outdone by quick swapping and basic strategies.

My only saving grace from those tedious battles was a quick use of commentary to give battles a touch of the excitement they sorely lacked.