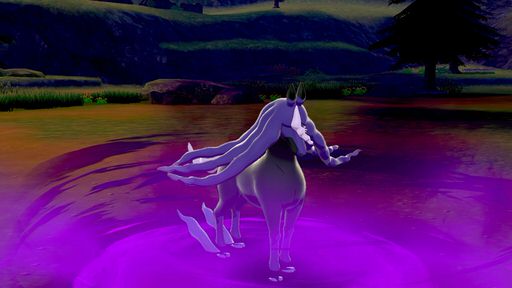 Now that The Crown Tundra is out in the wild and ready for Pokémon Sword and Pokémon Shield Expansion Pass holders to enjoy and explore, a couple more details have been shared on a few more new Pokémon players can expect to encounter. So join us as we welcome back “Who’s That Pokémon?” and this time, we’re tackling the Swift Horse Pokémon, Spectrier:

Description: This Pokémon craves silence and solitude and tends to be active at night when its energy is heightened. Its nocturnal habits have left its eyesight weak. But Spectrier’s other four senses are keenly sharpened, and they give it an accurate sense of the terrain and the locations of living things.

Spectrier takes in nourishment by absorbing ambient life-force emitted by other creatures. It has sharp hearing and a love for peace and solitude, so it avoids any involvement with other living creatures. However, Spectrier will attack any trespasser that disturbs its tranquil territory in an effort to drive the intruder off.​

Ability (Grim Neigh): Spectrier’s Ability, Grim Neigh, is a new Ability introduced with the Pokémon Sword Expansion Pass and Pokémon Shield Expansion Pass. When a Pokémon with this Ability knocks out a target, its Sp. Atk stat is boosted.