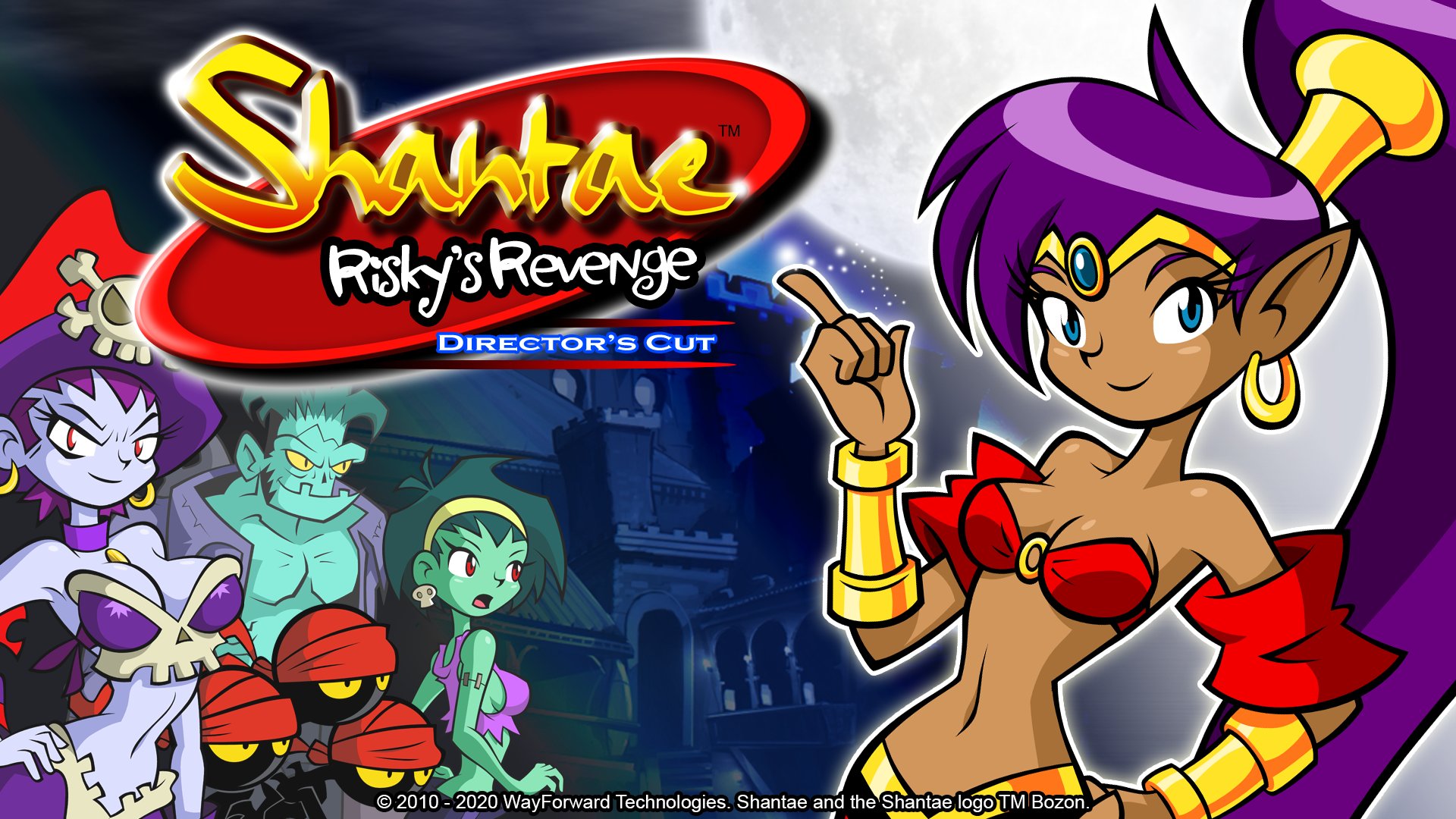 Developed by WayForward, Shantae: Risky’s Revenge is the second installment in the Shantae series. The game first released on Nintendo DSi back in 2010. It later saw release on iOs and also on Microsoft Windows as Shantae: Risky’s Revenge – Director’s Cut. The Director’s Cut version included a Warp System as well as “Magic Mode” a game mode that was introduced in the iOS port and wasn’t available in the original DSi version.

Shantae: Risky’s Revenge – Director’s Cut later released on PS4 in 2015 and Nintendo Wii U in 2016. It was announced sometime in 2020 that the game would be made available for the Nintendo Switch and Xbox One in October 2020. It may be the second game in the series but it is the fourth to come to the Nintendo Switch System following Shantae and the Pirate’s Curse, Shantae: Half-Genie Hero, and Shantae and the Seven Sirens.

Shantae is a half-genie who is the guardian of a little island town called Scuttle Town. One day, Shantae’s Uncle Mimic was attending the Relic Hunters Expo to present an artifact that he has found. The artifact turns out to be a lamp encased in stone. Before Uncle Mimic could talk any further about the artifact, the infamous pirate Risky Boots storms the expo and steals the lamp. Shantae sets off after her nemesis Risky but after a short fight, Risky manages to escape and Shantae is knocked out.

Shantae: Risky’s Revenge – Director’s Cut is a 2D adventure platforming game with Metroidvania elements to it. Shantae has to explore a colourful world full of labyrinthine dungeons to fight a boss and claim their Magic Seal. To fight enemies, Shantae can use her hair as a whip and can use magic to throw fireballs or conjure maces that will revolve around her person.

Shantae can also learn transformation magic to turn her into a monkey, elephant, or mermaid. The Monkey transformation will allow Shantae to climb up walls. The Elephant can smash into rocky boulders, and the Mermaid can swim underwater.

Shantae only has three hearts at the beginning of the game but she can extend her health by finding health containers hidden in chests around the world. Scuttle town, has a number of amenities that Shantae can use. Such amenities include a place to save your game and an item shop. You can also find supporting characters like Uncle Mimic, Skye, and Bolo somewhere in the town as well. If you ever get stuck and don’t know where to go or what to do, there is usually someone in Scuttle Town who can point you in the right direction.

Shantae: Risky’s Revenge – Director’s Cut adds only a few new features to the original DSi title. The first of which is the “Magic Mode” which was actually first introduced to the iOS version of the game. Magic Mode increases the difficulty by reducing the cost of magic and increasing the amount of damage enemies can dish out. In the Director’s Cut, this mode has to be unlocked by beating the game whereas, in the iOS version, it could be accessed immediately and simply be turned on and off.

The other feature is the implemented warp points that will allow Shantae to move from one side of the map to the other (providing she has activated the Warp Point before). This makes traveling back and forth far easier when required to backtrack to certain areas in order to find objects or skills needed to push forward.

One small feature that slipped past me completely until I beat the game can be found in the options menu. The game’s screen ratio is set at 4:3 with borders by default but you can change the ratio to 16:9, 4:3 with black borders, and the original DSi ratio as well.

Shantae: Risky’s Revenge – Director’s Cut has such a rich and energetic OST. Many of the songs you may recognize from other Shantae games like Shantae and the Pirate’s Curse or Shantae: Half-Genie Hero, but they all came from somewhere.

The first Shantae game released on the Game Boy Color and used chiptune music. Shantae: Risky’s Revenge is the first game in the series that uses many of the iconic sounds and music that we still hear in later entries in the series. Unlike its successors, voice acting is not present in this game and wasn’t introduced until Shantae and the Pirate’s Curse.

The visuals in Shantae: Risky’s Revenge – Director’s Cut uses colorful pixel art and sprites for the most part. The menus and dialogue cutscenes have been modernized and vectorized and are more in keeping with modern games.

The game’s performance is extremely stable and I have not encountered any issues. It runs smoothly but its not like the game is graphically demanding. Loading times are reasonably short so you won’t be waiting around too long between room transitions.

The Shantae series is one that we do hold dear at Miketendo64. I will admit that I have yet to play the original GBC game and this was my first time playing Shantae: Risky’s Revenge on any platform. When I learned that WayForward was aiming to bring the first two games to the Nintendo Switch, I was pleased that I would be able to finally play the original games.

In comparison to the later installments in the Shantae series, Shantae: Risky’s Revenge – Director’s Cut will feel on the short side. Now, Shantae games are not exactly known for being lengthy. They can usually be beaten in about 5-6 hours and maybe another hour or two to 100% complete them. Shantae: Risky’s Revenge – Director’s Cut, however, took me just over 4 hours to beat and that was only because I was stuck in the Hypno Baron’s dungeon with no clue what to do. Now that I know what to do and where to go, I am sure I could beat the game again in a fraction of the time.

First and foremost, Shantae: Risky’s Revenge is a Metroidvania game but it does have little moments that break up the monotony of constant exploration and dungeon crawling. The Battle Tower has a series of floors that require you to fight through hordes of enemies in order to receive a prize. It might not veer too off-course from the rest of the game but it does change things up somewhat. My favourite moment though has to be the underwater section where you must blast through enemies ‘Gradius-style’ in the Mermaid transformation.

Shantae: Risky’s Revenge – Director’s Cut is an enjoyable romp for casual players and fans of the Shantae Series though it is overshadowed by its incredible sequels that are also available on Nintendo Switch. However, if you are looking for a good entry point into the series, you can’t go wrong with this game.