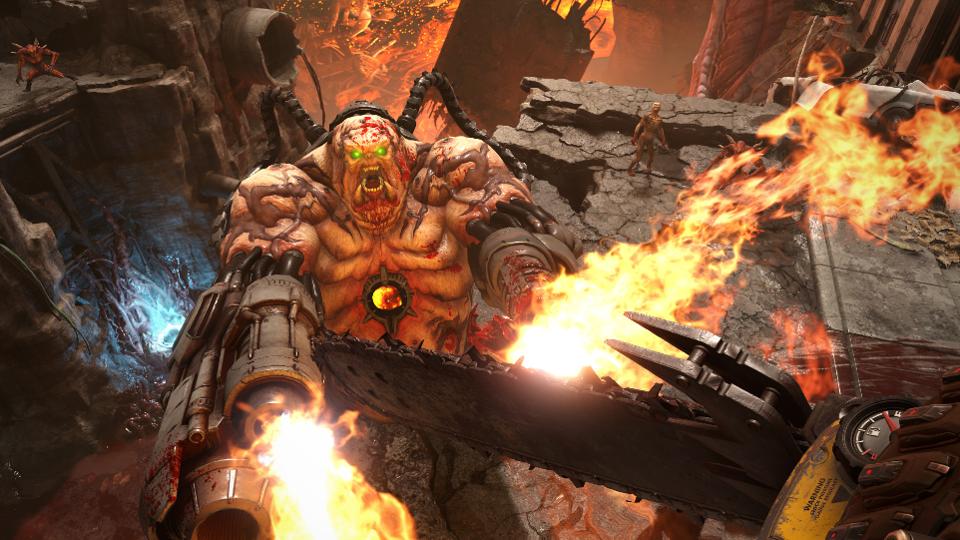 “Your affinity for guns is apparent.”

Raze Hell and obliterate demons by unleashing your unbiased DOOM on Nintendo Switch, by picking up and playing any one of the five available DOOM games that you can download from the Switch eShop this very second! What better way to pass the time as Switch owners wait for DOOM Eternal?

Welcome to our DOOM guide:

Developed by id Software, the studio that pioneered the first-person shooter genre and created multiplayer Deathmatch, DOOM returns as a brutally fun and challenging modern-day shooter experience. Relentless demons, impossibly destructive guns, and fast, fluid movement provide the foundation for intense, first-person combat – whether you’re obliterating demon hordes through the depths of Hell in the single-player campaign, or competing against your friends in numerous multiplayer modes. There is no taking cover or stopping to regenerate health as you beat back Hell’s raging demon hordes. Combine your arsenal of futuristic and iconic guns, upgrades, movement and an advanced melee system to knock-down, slash, stomp, crush, and blow apart demons in creative and violent ways.

Celebrate DOOM’s 25th anniversary with the re-release of the original DOOM (1993). First released in 1993, DOOM introduced millions of gamers to the fast-paced, white-knuckle, demon-slaying action the franchise is known for.

Experience the classic demon-blasting fun that popularized the genre home or on-the-go.

Celebrate DOOM’s 25th anniversary with the re-release of DOOM II. This beloved sequel to the groundbreaking DOOM (1993) gave players the brutal Super Shotgun to bear against deadlier demons, and the infamous boss, the Icon of Sin.

Battle the demon hordes at home or on-the-go on Nintendo Switch.

The re-release of DOOM II includes:

To save Earth, you must descend into the depths of hell, survive demon hordes, and take part in the fiercest battle ever.

Celebrate DOOM’s 25th anniversary with the release of DOOM 3, available for the first time on Nintendo consoles.

In this critically acclaimed action-horror re-telling of the original DOOM, players must battle their way through a demon-infested facility before entering the abyss to battle Hell’s mightiest warrior – and put an end to the invasion.

DOOM 3 includes the Resurrection of Evil and The Lost Missions expansion packs.

Celebrate DOOM’s 25th anniversary with DOOM 64, originally released on Nintendo 64 in 1997. Take the fight to Hell at home or on-the-go with DOOM 64’s triumphant return to Nintendo Switch™!

Fight against demons in your crusade to hunt down the Mother of Demons and stop Hell’s invasion. As you battle through more than 30 action-packed levels, be on the lookout for enhanced weapons and secrets to help you put an end to the demonic threat.