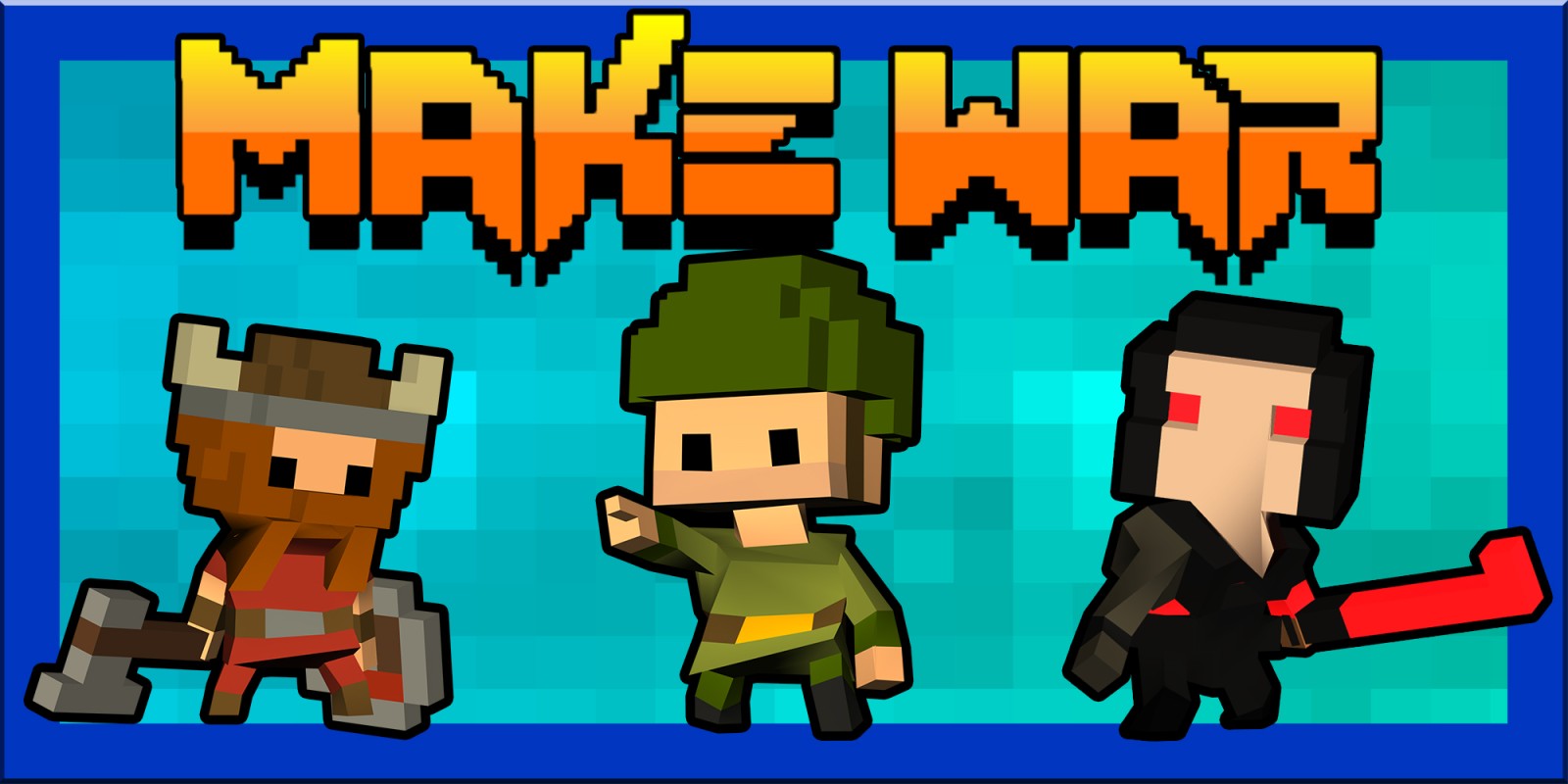 Russian developer Deqaf Studio first released Make War on Steam October 16th, 2019. It received mostly positive reviews from those who had played it. The game’s release on the Nintendo Switch is another opportunity at a different audience.

The premise of Make War is the story of two armies (a red and blue army) in war, with extraterrestrial beings involved… somehow. Aliens invade Earth and get involved with human conflicts throughout the ages. Though the story tries to go into detail, the writing is so poor it’s hard to follow along (more on that later).

Make War is a “sandbox real-time strategy” game where your goal is to lay out the structure of the battlefield by building structures, setting the ground for your army, and laying down traps using the limited tools at your disposal. The gameplay is similar to that of Landfall Games’ TABS (Totally Accurate Battle Simulator), which will be available to the Nintendo Switch once the game comes out of Early Access.

In the Battlefield there is the red and blue team, both destined to collide and duel to the death. You can’t alter their layouts as they come predetermined depending on the current missions available. Instead, you control a third team, the Aliens. It’s an odd decision to include a third team into the fray, as these end up being caught in the crossfire of the other two groups. Your forces are limited, so they will likely end up being destroyed quite easily. Once your team is gone, it’s a slow and boring fight between the two teams, neither of which are yours. The objective is unclear, do Aliens serve to help destroy more soldiers of one team? Are the Aliens supposed to win?

The pacing is slow and progression is tedious, this is due to various issues involving mission objectives and clunky controls. For one, you unlock new tools for your arsenal by completing a batch of missions. Though the first few are quite simple, getting the final one or two objectives completed in the next batch is extremely challenging. This issue is caused because of how teams are structured.

Since both red and blue sides are pre-determined to certain locations, it becomes less of strategizing what’s the most optimal way of beating both teams and more of finding out the right layout on your side to gain the advantage. There are not many alternatives for completing a challenge, so most of the time it felt like I was guessing how to structure my terrain or relied on luck to secure the win. Getting it right is painfully slow and could potentially become a roadblock to your entire progress.

The only mode available is the campaign, wherein the world-hub/level select screen you can choose to either continue mission progress or play in the sandbox (there you have full control over all three teams). The settings options only include sound toggles and changing language.

As for weapons, there’s a total of 45 to unlock. There’s a nice variety, like a hypnosis machine, turrets, and landmines. There are also 35 combat units, who although act differently from one another, look almost identical if the camera is zoomed out. When armies of one-hundred units group up, it’s hard to tell who’s who.

Sound effects are okay for the most part but sound generic. The same can also be said about the music. In the end, I preferred playing the game muted as I found the tracks got too repetitive after a few minutes.

Visuals are bland and don’t stand out from any other low-poly “blocky” art style out there. It looks like a blend between Minecraft and Lego, but there are no distinctive features to it. Unlike “TABS” where characters are fully rigged and limbs can be seen flying everywhere in battle, the characters here are too square and small to be able to notice anybody’s physics happening. It’s a shame since the game’s official description leads you to believe there’s “(…) full physics. Bodies flying, debris exploding, corpses (…)”.

Load times are decent and frame rate maintains itself without hiccups. When the battle speed seems a little slow or too fast for your liking, the speed can be adjusted to suit your preference. For really fast battles, the maximum speed can be set to 2.4x.

One of the biggest flaws is the controls. You use a cursor on-screen with the analog stick. The speed of said cursor is way too fast and imprecise, making it impractical. Selecting pretty much anything is a challenge on its own, and there’s no option to customize speed or cursor size either. With a game all about selecting tiny people and objects on the battlefield, it quickly becomes frustrating to even play the game. You also can’t take out a group of placements, instead, you have to select them manually, one by one.

Button mapping is it’s own annoyance as well. There are some toggles and options that need a button shortcut yet don’t have one. Though the overhead camera speed is fast and zooming in and out works great, turning the camera around to different angles is absurdly slow, and there is no option to change its speed. Frustrating, to say the least.

I tested out touch controls, and though one would think this is a slightly better control option, it too comes with its own set of flaws. The main issue comes with how limited it is. Although you can interact with the HUD and Options, you can’t place or touch anything on the battlefield. To control those, you need to use the messy controller option! Why can’t touch controls work for everything on the fighting grounds?

Finally, we have the writing, which is embarrassingly bad. It’s understandable that the game was developed by a Russian team, therefore there could’ve been some issues with the translation. But the fact that I got much better results with the translation by using “Google Translate” than whatever was used for this game is simply mind-boggling to me. Every piece of dialogue is riddled with mistakes, from grammatical to punctual errors. It’s hard to understand both the story and the objectives due to poor interpretation.

Make War is an underwhelming experience. The gameplay never demands strategy and became more of a luck-based guessing game than anything else. Playing becomes a chore and there’s no incentive to return after the first hour or two, partially due to its multiple design flaws. You’re better off skipping out on this one.