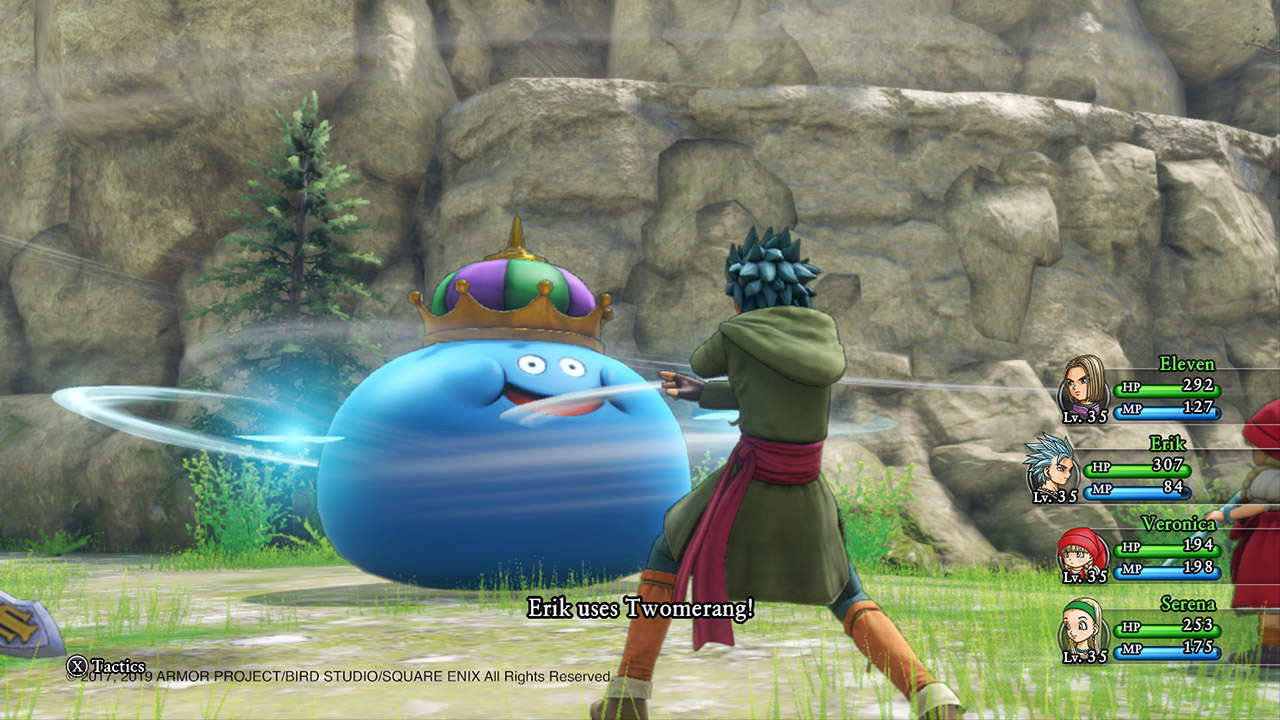 “Wait a minute–that rat! He must have done the dirty on me and taken it for himself!“

Get ready to discover the magical wonder of Dragon Quest, with six games available worldwide, a DLC Fighter appearance in Super Smash Bros. Ultimate and an additional four titles that are only available in Japan. This guide is going to be a big one:

Gather, craft, and build the kingdom of your dreams to restore the ruined world of Alefgard! As the legendary Builder, you’ll construct rooms, towns, and defenses while fighting monsters.

In Terra Incognita, build freely, share creations online, battle in an arena, and access exclusive content to the Nintendo Switch™ version of the game! You’re the only one in Alefgard who can rebuild and level up its ruined towns to attract new residents and raise their strength. But be wary: increasing a town’s level will also lure the Dragonlord’s monsters! So, join residents and fight back! When you defeat monsters and break blocks of the environment, you’ll earn materials for crafting items and building structures.

Enjoy content exclusive to the Nintendo Switch version in Terra Incognita: ride a Great Sabrecub, slay foes for Pixel Blocks, and use them to build a Dragon Quest Game Pak so you can access more items for building! The land is yours to rebuild… The goddess Rubiss has spoken!

The legendary RPG comes to Nintendo Switch with updated controls. Whether you’re a veteran fan in need of a nostalgia trip, or a newcomer to the series looking for a fresh take on an old classic, there’s something here for everyone. Enter a fantasy world of sword, magic, and monsters!

Story: The peace of fair Alefgard has been shattered by the appearance of the nefarious master of the night known as the Dragonlord, and the Sphere of Light, which for so long kept the forces of darkness in check, has been stolen! It is time for you, a young warrior through whose veins flows the blood of the legendary hero Erdrick, to set out on a quest to vanquish the Dragonlord, and save the land from darkness!

Experience the first episode of the DRAGON QUEST series loved by millions in Japan and worldwide! Created by a legendary trio with the master creator Yuji Horii, the revolutionary synthesizer score and orchestration by Koichi Sugiyama, and art by master manga artist Akira Toriyama.

The second installment of the classic RPG comes to Nintendo Switch with updated controls. Join the descendants of the legendary hero Erdrick as they embark on an epic adventure to defeat the diabolical High Priest Hargon!

Story: A century has passed since the events of the first DRAGON QUEST, during which time the descendants of the hero of Alefgard have forged three new nations. But the peace they have known is no more. Demon hosts summoned forth from the darkness by High Priest Hargon have brought the land to the brink of ruin once again. Now, the young prince of Midenhall must set out to find the other two descendants of Erdrick so that together they might defeat the nefarious Hargon and restore peace to their world.

Experience the multi-million selling series, beloved both in Japan and beyond, and see how the masterful talents of series creator Yuji Horii, combined with the revolutionary synthesizer sounds of Koichi Sugiyama and the wildly popular manga illustrations of Akira Toriyama to create a gaming sensation.

The ground-breaking RPG from 1988 comes to Nintendo Switch with updated controls. Can you succeed where your father failed and vanquish the barbaric Baramos? Now all three installments of the Erdrick Trilogy can be played on Nintendo Switch! Every wondrous weapon, spectacular spell and awesome adversary in this rich fantasy world is yours to discover.

Story: On the morning of your sixteenth birthday, you are charged with a seemingly impossible task by the King himself: to assume the mantle of your father Ortega, hero of the land of Aliahan, and slay the Archfiend Baramos, master of darkness! What trials await you, intrepid hero, as you set out on a quest not even your legendary father was strong enough to complete?

Experience the multi-million selling series, beloved both in Japan and beyond, and see how the masterful talents of series creator Yuji Horii, combined with the revolutionary synthesizer sounds of Koichi Sugiyama and the wildly popular manga illustrations of Akira Toriyama to create a gaming sensation.

To stop the worshippers of an ancient evil, you must join forces with the mysterious Malroth and build a ravaged world into the realm of your dreams. In this RPG adventure, you’ll explore huge islands, gather and craft with materials, design towns, level them up, and defend them from monsters and bosses alongside townspeople. As you progress, you’ll unearth crafting and building recipes. Dash, glide, explore underwater, fast travel, and play in optional first-person perspective as you try to find them all. In the Isle of Awakening, you and up to three other Builders can explore together in local wireless*; or play online** together too.

Share screenshots by posting them online through the Noticeboard, or visit other players’ islands and use the Magic Pencil to create a blueprint of a favorite creation.*** You can get recipes that let you craft the Legendary Builder’s outfit and the Dragonlord’s Throne by owning the original DRAGON QUEST BUILDERS game on the Nintendo Switch™ system. Why not adventure in style as you take quests to help those in need, engage in the daily lives of townspeople, and master the latest farming techniques? All in a day’s work for the Builder!

You are the Luminary, the hunted hero who will protect the land from destruction in the latest RPG from the iconic DRAGON QUEST® series. With a ragtag band of adventurers, you’ll engage in well-balanced, turn-based battles and embark on quests across the kingdom of Erdrea. Forge gear, develop party members’ skills, and alter their outfits without changing gear in this edition of the game! This version also lets you ride and attack with monsters on the field to earn experience points, as well as change between HD or 16-bit visuals, symphonic or synth music, and English or Japanese audio. Complete the tale with new character-focused stories, and travel to past DRAGON QUEST worlds!
Across the land, you’ll meet the mysterious Tockles—creatures that allow you to visit 2D, 16-bit versions of areas from popular entries in the series like DRAGON QUEST IV and DRAGON QUEST VIII! It’s fun to see these classic worlds reimagined in retro style, meshing perfectly with the main game’s 2D mode. Like all past DRAGON QUEST games, this one’s character designs are based on the signature style of famed artist Akira Toriyama. Paired with the voiced dialogue, the rich personalities of your most loyal companions and fiercest enemies are brought to life, so you can fully immerse yourself in this quest to discover the Luminary’s true heritage and awaken your power. For a greater challenge, start the game with the Draconian Quest setting, and capture your favorite moments with Photo Mode!

Dragon Quest Heroes: The World Tree’s Woe and the Blight Below