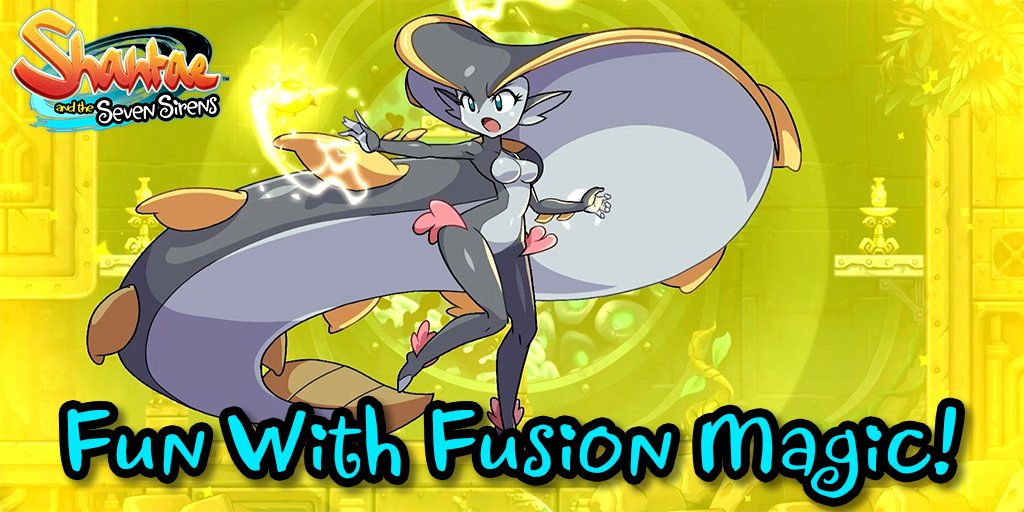 More powers for the Half-Genie Hero!

With Shantae’s fifth video game debut so close to release (May 28, 2020 for consoles and PC,) one new aspect about the game, is the introduction of Fusion Magic. With this new ability, Shantae can merge her powers with those of other Half-Genies and get up to all sorts.

What’s more, developer WayForward has provided a great deal of information regarding Fusion Magic, which we’ll be sharing here:

Discover the details of Shantae’s new dances and animal forms!

Shantae and the Seven Sirens, the fifth entry in the hair-whipping action-adventure series, is scheduled for release on Nintendo Switch, PlayStation 4, Xbox One, and PC on May 28. As fans have come to expect, the game is chock full of action, exploration, humor, and excitement, and, as usual, Shantae will be able to rely on her dances and animal transformations to help her through her journey.

This time, however, things are a bit different. Thanks to the other Half-Genies Shantae meets on her tropical-island getaway, she obtains the power of Fusion Magic. That power takes shape in two ways: Fusion Forms and Fusion Dances.

Fusion Forms are bestowed upon Shantae when she receives Fusion Coins from her Half-Genie allies. This lets Shantae magically change into all-new creatures — which are all native to the new tropical island setting — and much like in past games in the series, she’ll use the creatures’ abilities to help her explore the game world. But now, due to the power of Fusion Magic, the transformations are instantaneous — no dancing required — and they function more like the Pirate Gear in Shantae and the Pirate’s Curse.

For example, by pressing one of the shoulder buttons, Shantae will immediately turn into the Dash Newt, allowing her to zip through the air, then stick to and climb up or down walls; or, by holding and releasing the attack button, Shantae will execute a spin attack as the Bonker Tortoise, enabling her to smash through rocks. The Gastro Drill Fusion Form, meanwhile, is context-sensitive; simply press towards soft dirt and Shantae will become a Gastro Drill, letting her burrow through the earth so she can discover secrets or reach new areas. There are five Fusion Forms in all.

But fear not, dance enthusiasts! Shantae is still ready to show her moves with a variety of hip-shaking powers! While Fusion Coins let Shantae share the power of animals, acquiring a Fusion Stone lets her borrow the abilities of her newfound Half-Genie friends, and that arrives in the form of Fusion Dances. These dances have a variety of benefits that affect the environment around her, such as seeing hidden objects, revitalizing people or things, or powering machines with a barrage of electricity.

Control for the Fusion Dances is similar to the transformation dances in Shantae: Half-Genie Hero; hold down the dance button so Shantae starts groovin’, then press the direction corresponding to the dance you want to use. After that, you’ll see a brief screen-filling animation as Shantae temporarily assumes a new hybrid form and unleashes the dance’s powers.

No matter which kind of Fusion Magic you’re more excited for — the instant Fusion Forms or the environment-affecting Fusion Dances — you won’t have long to wait before trying them for yourself.