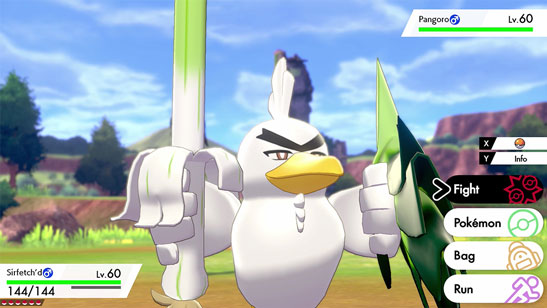 This week’s News round-up consists of the Pokémon Sword exclusive Pokémon SirFetch’d which is the evolutionary form to Farfetch’d. Luigi’s Mansion 3 is confirmed to receive DLC and three classic Dragon Quest games were confirmed to be coming to the West on Nintendo Switch.

We have an overive from the official announcement below:

Upon its release in 1986, the pivotal DRAGON QUEST series became a cultural phenomenon, accumulating a large, passionate fanbase of millions worldwide, and set the standard for the RPG genre. This modern collection of the classic titles features simple and intuitive controls that mimic retro gameplay, paying homage to where the legacy began.

The iconic Erdrick trilogy begins in the acclaimed DRAGON QUEST where players begin their voyage as the “Hero,” a descendent of the valiant hero Erdrick in an epic journey through the historic realm of Alefgard. DRAGON QUEST II: Luminaries of the Legendary Line takes place a century later, where the young prince of Midenhall embarks on a journey to find the other two descendants of Erdrick in order to defeat the nefarious Hargon. The third and final title in the Erdrick trilogy, DRAGON QUEST III: The Seeds of Salvation, takes players through the land of Aliahan, where a young hero has been charged with an impossible task of slaying Baramos, the master of darkness.

A listing for Luigi’s Mansion 3 has appeared on the Nintendo Switch eShop. The game is now available to pre-load ahead of its release on October 30th. What is interesting about the listing is that reveals that Paid DLC will be coming to the game in the near future. Towards the end of the description in the listing, there is a statement in regards to Paid DLC and that it will bring new content to the Game’s multiplayer modes, Scarescraper and ScreamPark.

No other information has been shared at this time.

The Official Pokémon Channel teased a new Pokémon for Pokémon Sword and Pokémon Shield earlier on in the week with a pixelated image. It has now been officially revealed to be a Sword exclusive evolutionary form for Farfetch’d. The new Pokémon is Sirfetch’d, the fighting-type Pokémon. It yields a leak sword and a leaf shield and possesses the ability Steadfast.

If you have yet to see the introduction video for Sirfetch’d, you can check it out below.

Blitworks Studios have announced that they are bringing the 2D arcade beat ’em up Fight ‘N Rage to the Nintendo Switch. The game will be releasing on the console on September 27th. The game features three-player local co-op, unlockable costumes, alternate paths and extra characters.

We have an overview and a trailer for the game below.

Fight’N Rage is a 2D arcade brawler inspired by the classic fighting gems of the 90’s. It mimics the aesthetics and simplified three-button gameplay of legendary games such as FInal Fight, Battletoads and Captain Commando.
Originally released on Steam, Fight’N Rage is set in a far future in which human beings are enslaved by mutants. A female kick-boxer named Gal, a minotaur-like rebel mutant called Ricardo, and F. Norris, a mysterious ninja whose past is a mystery, will join forces to defeat the mutant leader The Boss and bring back peace to Earth.
Fight’N Rage features three players local co-op mode with optional friendly fire. It contains alternative paths, cutscenes and endings that can change based on the selected characters and your own decisions.

Source: Blitworks PR
Well, that is all for this week. Thank you for taking the time to check out our Weekly News Round-up and we hope you all have a great weekend.
Until Next Time, Keep On Gaming!