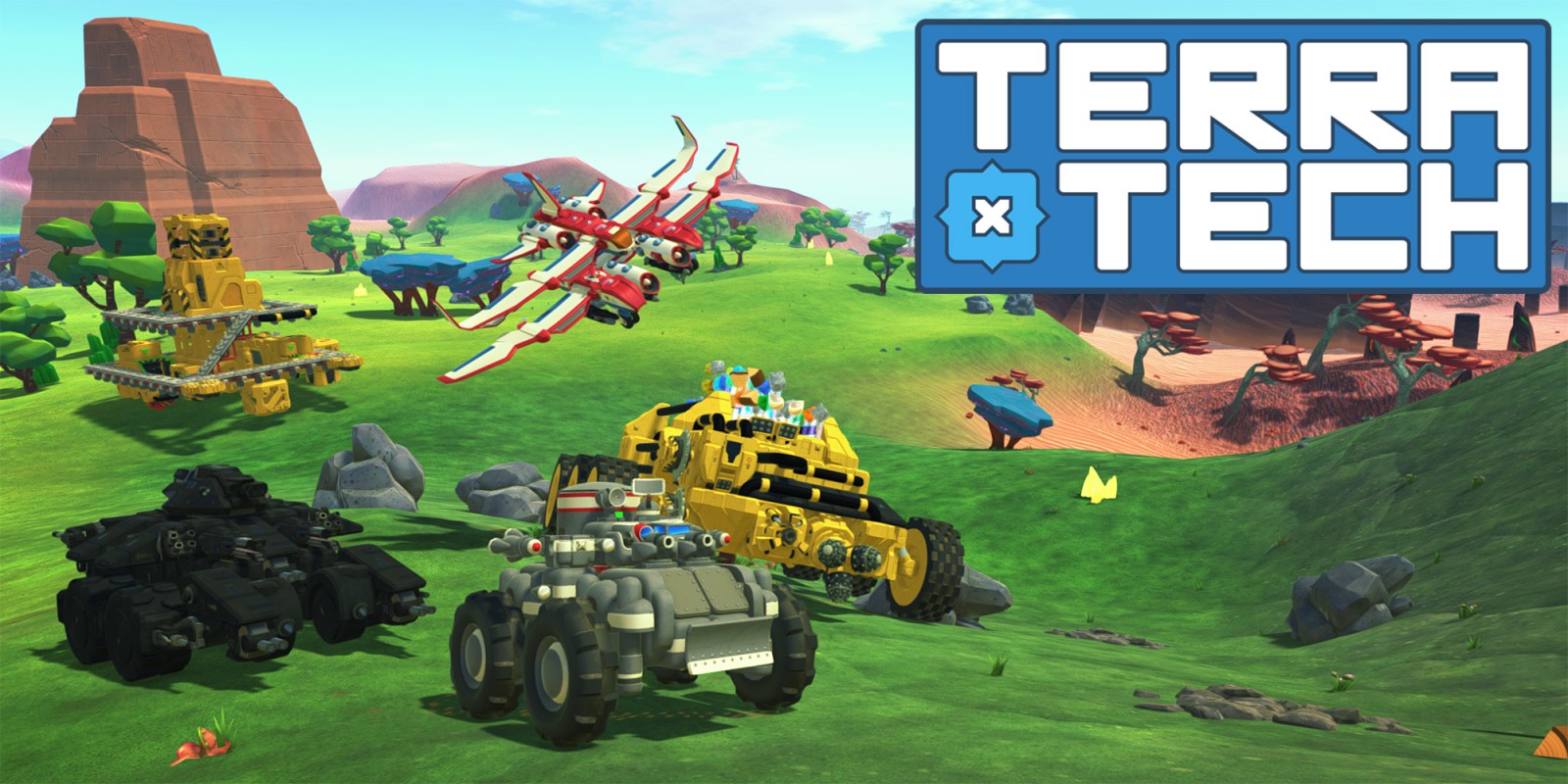 TerraTech was originally released on Steam, Xbox One, and PS4 in 2018 and was recently released on the Nintendo Switch. The game received moderate praise for its unique take on the open sandbox building style gameplay found in games like Minecraft.

There’s not much in a sense of story in the game, though the game progresses through mission-based gameplay with various tasks like collecting certain items and helping robot droids rebuild collection devices. The game world contains various collection spots where you can turn items into money which you can use to buy newer parts that unlock at a slow yet steady pace.

I would compare TerraTech to that feeling you have as a kid digging through a bin of LEGO or bucket full of Technix pieces. TerraTech allows you to creatively place the various pieces you find in ways that make every creation unique. Each main block piece or larger 2×1, or 2×2, etc. section has points on it which other pieces can connect and snap to.

This allows for nearly endless possible customized tanklike constructions. Along with square pieces, you will unlock and discover or pick up lasers, blasters, giant drills, wheels, radar, lights and more. Those pieces can be continuously added to your creation as long as you have the capacity for them to connect to.

While you maneuver your creation through the gameworld you will encounter enemy tanks that will try to blast you into oblivion. The early enemies you run into may give you a tough fight as you slowly gain parts and defense, so seeking out and destroying the smaller foes is the best way to gain more parts. The small skirmishes do little to change up the pace of the game as they end quickly.

After awhile you will locate robots that need you to help with missions for collecting items, defeating enemies, and stumble upon containers full of new items. The missions can be handled in any order, though some of the missions do net you higher amounts of XP.

As you gain XP you gain access to various bits of equipment that will allow you to traverse varied terrain and eventually gain access to fly. The path through to get to the varied equipment and upgrades is slow and boring and not all that interesting.

TerraTech has a lot of varied equipment most of which will help you gain defense against incoming attacks and add offensive weapons to thwart enemy advances. The pieces you gain are varied in size and color and help in creating your uniquely constructed vehicle.

One thing I enjoyed was crafted and tearing apart my mammoth tank time and time again after a big battle or a storage container was discovered. Sometimes I built my vehicle beefy and tall other times I decided for a wide shooting radius with blasters and lasers shooting from all sides. The endless amounts of creativity were enough to engage the childlike spirit in me for hours while I mixed and matched the pieces that I collected.

Along with the single-play campaign, there is a creative mode that allows you to build with any of the blocks that are available in the campaign. In this mode, you can save your vehicle models you make and share your creations with friends. Gauntlet mode is a boss battle barrage kind of mode that has you racing to the end goal and the top of the leader boards to become the best TerraTech champion. The added modes were okay, though, in my defense, I don’t have friends that are playing it so the two modes of sharing and leaderboards don’t too much for me in terms of spouting off victory chants to my friends or showcasing my work to them.

Aside from the blast of weaponry, drilling through rocks, and some other futuristic-sounding weapons, TerraTech does not include a whole lot in terms of sound effects. The game has a rather repetitive audio track and only ramps up when secrets or enemies are approaching.

TerraTech runs competently on the Switch in docked mode as does it in handheld mode. I did notice some frame stuttering and a lot of pop in from the nature around you as you traverse across the land. The game does have a lower poly look in its overworld and creation tools, though the blocks do have a degree of detail to them even if some of the pieces you will encounter over and over again.

There are a lot of sandbox, building type games, and TerraTech jumps in blocks a-blazin’ in hopes to make its spot among the titans. The game is ambitious in some areas giving players a near-endless amount of blocks and add-ons to create their desired monstrosities. But due to the games lackluster and slowly building campaign, it is unclear if people will stick around long to see the main mode to its completion.

In a saturated world of games that let you create, TerraTech will find itself quickly among those left in the dust and bargain bin due to its sorely lackluster campaign and lack of audience for the sharing and leaderboards. The game is fun, for a short amount of time, but loses a lot of charm quickly due to its slower pace and difficulting in creating a meaningful experience.

Yard sales are where you find the cheap toys and unfortunately, TerraTech is going to be considered among the cheapest.  If you are looking for a game like this, you may have fun but be warned, the game blocks quickly fall to pieces.