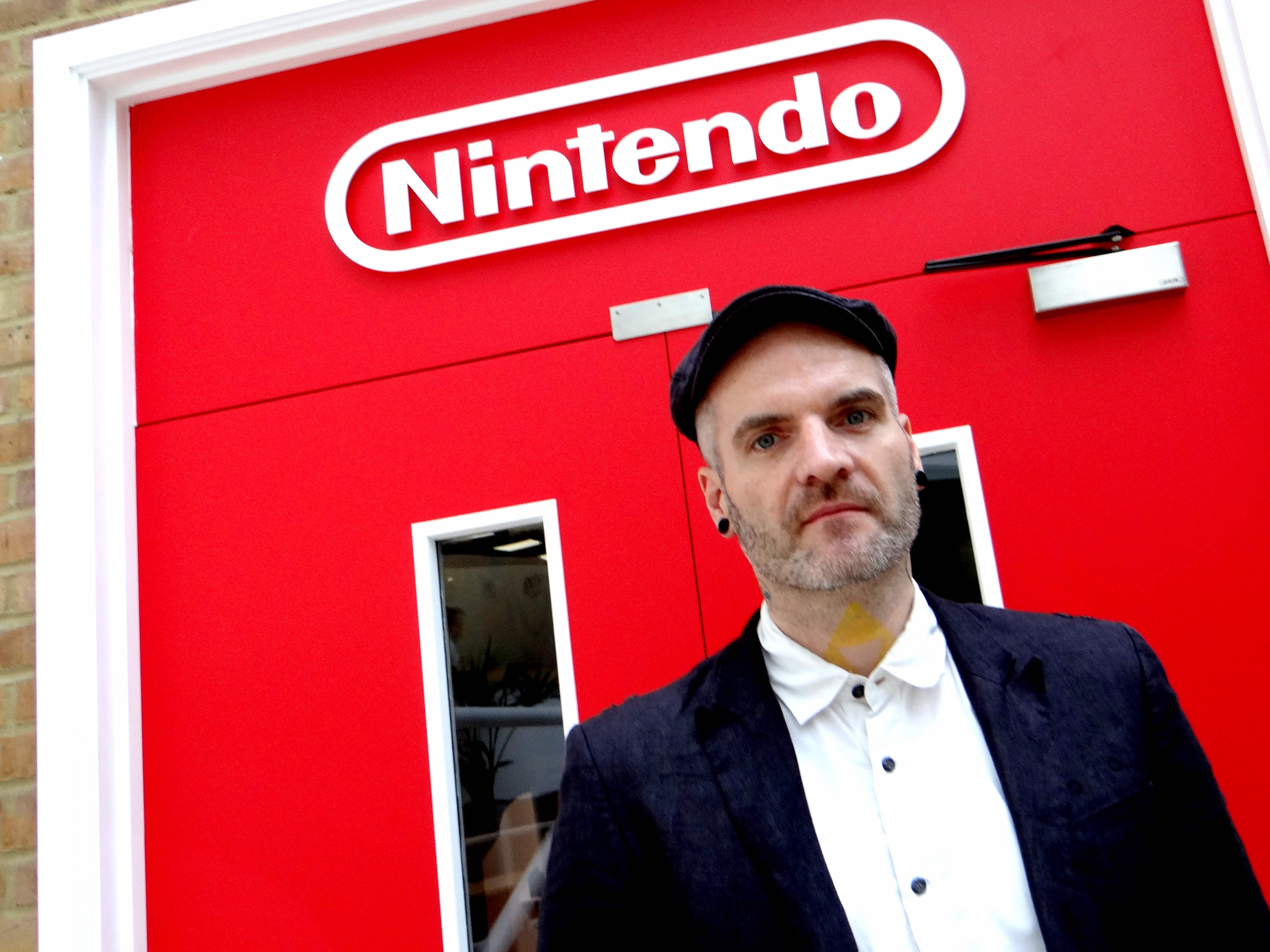 There are so many great Content Creators out there that really have a passion for what they do. Most opt for video content, some still hold on to the written word. Speaking of which, one man who is dedicated to keeping the written word alive is Brian Cooper of Japanese Nintendo. We have known Brian for as long as we have been running Miketendo64 and we are great admirers of his work and dedication.

Japanese Nintendo takes the Content Creator Spotlight this week as we ask him how he single-handedly manages to run the website and keep it up to date with all the latest Japan-centric Nintendo news and why Toad is such a favourite character of his? If you want to know how this incredible person does what he does and still find time to engage with his followers on Social Media, read on.

Miketendo64: To start off, why not tell everyone who you are and what you do?
Brian Cooper: I’m Brian. I run the Japanese Nintendo website https://japanesenintendo.com which, covers Nintendo Switch, 3DS, Wii U, and mobile, with mainly Japanese-centric news, but also the weekly charts, translated Famitsu reviews, and other stuff.

Miketendo64: How did Japanese Nintendo come to be?
Brian Cooper: I was a big fan of Japanese gaming back in the 90’s with a Super Famicom, Game Boy Light, Nintendo 64, and posthumously a Famicom and PC Engine. I think the first Japanese game I purchased was R-Type on the Game Boy which was an amazing port. My interest in Japanese gaming kind of slowed down in the early 21st century as I was never much of a fan of systems that used optical media, and the handhelds were largely region free.
The 3DS rekindled my interest in Japanese gaming as I had just purchased a white Nintendo 3DS LL, Monster Hunter 3G, and Animal Crossing: New Leaf back in 2012, so decided to start a blog in January 2013. This soon became https://japanese3ds.com and is now what you all know as https://japanesenintendo.com where I also cover Switch, mobile, and Wii U, as well as 3DS.

Miketendo64: Since running it yourself, what have been the biggest issues you have faced?
Brian Cooper: Mainly time as unfortunately I do need to sleep occasionally, and the moment I do so, some news usually drops! Unlike the larger sites, I do everything by myself, so I have no-one to cover when I do sleep. Wednesdays are the most hectic as my alarm goes off at 1:45 and I usually work through until midnight. I then usually get a couple of hours of sleep before my notifications go off ready for Thursday’s workload!
After time, it’s definitely financial issues which I’ll get into in a later answer. My physical health has also been an issue for several years as I had major surgery a couple of years ago having my stomach moved and am getting the same symptoms again now that led up to that surgery. Trying to research and write a post after being sick a dozen or so times isn’t the most fun thing to do! All this has also led to a deterioration of my mental health which is often exasperated by working seven days a week and several nights on top.
This is something that I haven’t gotten into in a public forum at all but a couple of people in the Nintendo community know to what extent and have been incredibly supportive. My advice to anyone suffering from mental health issues is to seek support. If your first (or second) point(s) of contact fail, then reach out further.

Miketendo64: On the bright side, there must have been some good moments too?
Brian Cooper: Oh there’s absolutely plenty! Literally 98%+ of the people I interact with are a real pleasure to interact with. I can’t imagine many other scenarios where this would be the case! I’ve also had so much fun throughout the years: from the old Tomodachi Tuesday posts to the Collectible Badge Center posts.
Although today, I’m more news-focused, as opposed to posting about my Mii’s antics in Tomodachi Collection: New Life and Baito’s latest shenanigans in Collectible Badge Center (Nintendo Badge Arcade), but I’m incredibly proud of my output, particularly the daily updates which have been a staple part of the site for over six years now.
There are also some amazing people in the Nintendo community and I have to thank you personally for all that you have done for me. I can’t mention here specifics as it would mean throwing people under the bus that I need to remain civil with, but thank you!

Miketendo64: Running a website is not without cost but Japanese Nintendo has been well established for some time. Do you run the website full time or do you depend on an external income for financial support?
Brian Cooper: It has become a full-time job this year! I do work part-time to earn some money, but that is minimal and doesn’t pay for anything more than rent, food, and my phone. The money I get from donations, affiliations, and advertising is nearly always less than what I pay for website costs, translations, artwork, and other expenses. So that’s one thing I need to try and turnaround in the next few months.
I just had another reduction (by 50%) in affiliate earnings this morning actually so it’s been a disastrous period for the blog financially as I’m already breaking into my food money to pay for expenses. I can’t see any turnaround anytime soon as it’s a case of being too big to be small but too small to be big. I’ll give it another few months however before deciding whether to continue or seek full-time employment elsewhere.

Miketendo64: You have a very loyal following on Twitter, which you always find the time to engage with. How do you organize your time between work, Japanese Nintendo, social media, gaming, and your personal life?
Brian Cooper: Very badly, unfortunately. Japanese Nintendo takes up far too much of my time and I barely find the hours to play games anymore. My personal life is often a mess! My partner, for half the time I’ve run the blog, and I broke up almost a couple of years ago now partly due to my time-(mis)management.
Regrettably, I ended up doing a trademark post in a restaurant when we met up again a few months ago. I really need to prioritize the more important things in life. I always feel guilty falling behind in social media replies as I can’t keep on top of everything all the time so ask you all to be patient and I’ll try and get back to everyone (other than memes – I’m too old to understand those!).

Miketendo64: When you do find time to play games, what is your ‘Go-To’ console?
Brian Cooper: I wish I found more time! This year has been particularly difficult – I promised you a Yo-kai Watch 4 review and haven’t found time to play in over a month, I’m only five hours into Fire Emblem: Three Houses, and 1 1/2 into Astral Chain.
If I did find time, then Super Famicom and PC Engine are my two favourite systems and I’m hoping to set my Japanese Nintendo 64 up in the loft when I’m back home. The little time I find at present is usually with Dr. Mario World which I can play for just 10 minutes at a time. Mario Kart Tour is expected to be another pick-up-and-play game when it releases.

Miketendo64: As regards to the future of Japanese Nintendo, do you have any plans to expand the brand or even build a team to help with the workload?
Brian Cooper: Well something will have to change in the few months or so as I’m not getting any younger! I’m optimistically hoping to earn enough to pay a helping hand as I haven’t the nerve to ask anybody to work for free. If not, I’ll likely have to rejoin the rat-race full-time which would likely mean shutting down the website or keeping it as just some kind of archive. Hopefully, it won’t come to that, but I can’t see the workload decreasing anytime soon unless Nintendo thinks a Switch U is some kind of a good idea!
Realistically I do expect it to close next year however and will willingly listen to any offers to buy the website and/or for employment. Regardless, I have almost everything in place ready to start my new podcast Toad Talk, I just need to record now! And a profile for Toad from Mario Kart will appear on Toad Town within the next few days!

Miketendo64: You also have a side project going on as well, Toad.Town. Could you tell us a little bit more about it?
Brian Cooper: Oh that was started just for fun just like how my main website used to be! I opened the site earlier this year and it features profiles of a number of Toad characters with artwork drawn by Leigh Davis (No Marios). I’ll be adding approximately one per month and have plans for additional characters and content if I ever run out of Toads (which won’t be anytime soon!). If I do ever discontinue Japanese Nintendo, then Toad Town will inevitably carry on and is seen as a longterm (but far-less time consuming) project.

Miketendo64: It is no secret that Toad from the Mario series is your favorite video game character. What is it about him that you like so much?
Brian Cooper: I think it’s his smile more than anything. Every time I feel down, I look at his smile and he cheers me up! It helps that he’s often easy to control in the games which he appears in too! I always played as him in Super Mario Bros. 2, but it was Super Mario Kart when he really became my favourite!

Miketendo64: Perhaps the most important question. Where can people find your content and engage with you on Social Media?
Brian Cooper: I don’t really have many profiles online due to lack of time, but my website is at https://japanesenintendo.com and my Twitter at https://twitter.com/japaneseswitch. The Toad website is also at https://toad.town/!

We thank you, Brian, for taking the time to talk with us and for being so open about the hardships of running a such a demanding website. We treasure our friendship with you and truly admire how you keep the Good Ship Japanese Nintendo sailing even through the most turbulent of times. We dread the day you decide to shut up shop as you are a staple in the Nintendo gaming community and one of the few honest, truthful media sites still running. We know all too well the struggles of maintaining a media site and are very lucky to have such an amazing team of writers contributing to our site.