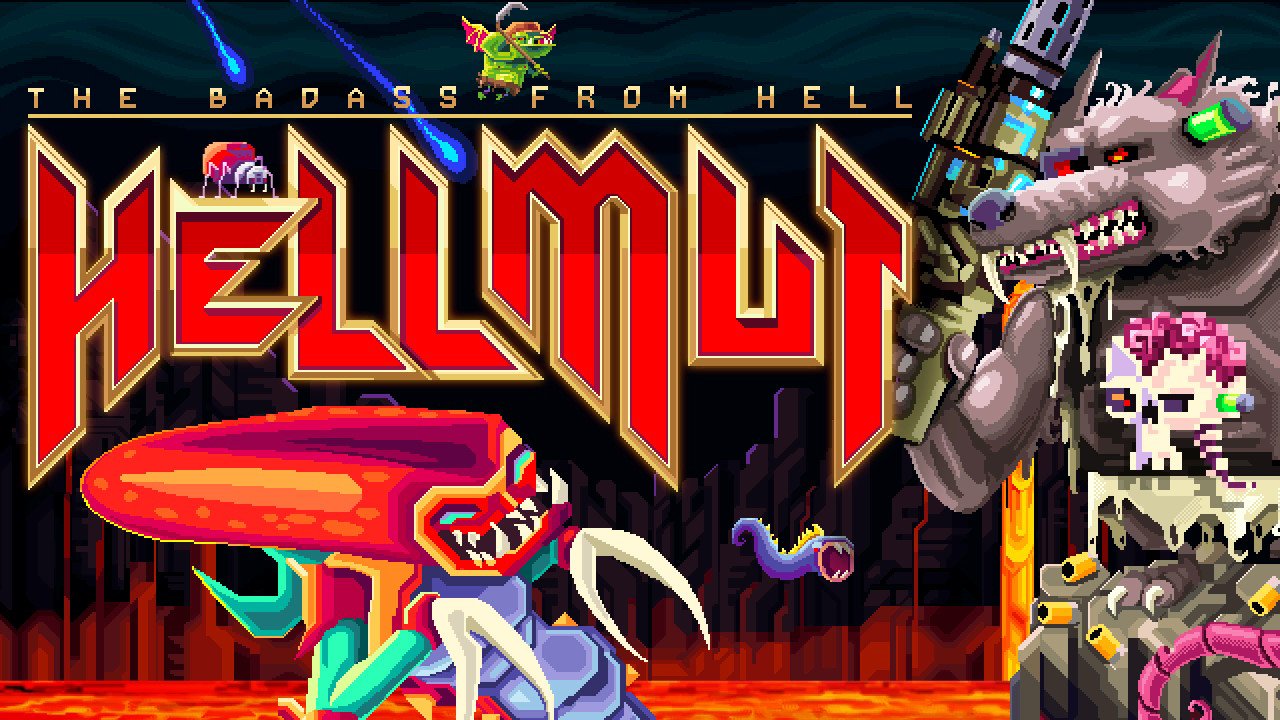 Rogue-like. A genre with a ginormous library, especially on the Switch. Live, die, repeat. That’s every rogue-like’s motto and Hellmut: The Badass From Hell is no exception. Sometimes, a game takes a risk and changes the basic idea of the genre it is pulling from and twists it, creating new and unique experiences. While, Hellmut doesn’t come anywhere near this idea, staying in the safe grey area between similar and distant, it’s fun, inspired graphics, setting, and gameplay twist kept me entertained throughout my journey on the go.

Hellmut: The Badass From Hell’s story was very reminiscent of some sort of 80’s horror cinematic experiences. A mad scientist hellbent on discovering the formula for immortality’s experiment goes horribly wrong when his laboratory is invaded by waves and waves of demonic creatures. I found this simplistic plot to be the base for my own storytelling, throughout my playthrough I came up with my own creative reasons as to why I would be in this position – crawling through a laboratory to take back what’s mine by utilizing the powers and shapes of many other mutants and failed experiments.

While I do believe that stories that rely solely on the player’s creativity can be deemed as ‘boring or lazy’, Hellmut combines both linear storytelling while allowing the player to fill the gaps in a unique and non-intrusive way, and this is something I found freeing and fun about Hellmut’s otherwise all-too-similar gameplay.

Initially, the game puts you into the role of the mad scientist previously mentioned but stripped down to his bare essentials, his head. Throughout the game, you’ll discover many playable characters, and unlike this game’s biggest lookalike, Enter the Gungeon, this game’s main mechanic is its emphasis on switching between playable characters on the fly, with their deaths becoming permanent.

I found this added a layer of strategy that I hadn’t seen in other rogue-like bullet-hells. If I entered a room with a lot of bunched up enemies, I might switch to a mutant that has a strong, yet short-range powerful weapon and then clear the remaining enemies with the sniper-like shots of another mutant. It all works so well and fluently. Finding, unlocking and utilizing all the mutants and their abilities kept me coming back for more and kept each run-through of the laboratory feeling fresh, something a lot of games in this genre lack.

The ‘levels’ in Hellmut come with a slew of challenges. On each floor, you’ll find different items and interactables such as the Eye of Amakara, which once paid for with the currency gained from defeating enough enemies, will open the possibility for you to acquire new mutants in your runs, with the downside being to overcome a difficult trial to prove your worth. Along with this, the currency can be spent in the shop, where you can buy new weapons, ammo, health, items or anything else that lies in the spectrum of miscellany.

While playing Hellmut, it was hard not to compare it to competitors like Gungeon. However, it’s one glaring difference was the difficulty. Without any sort of dodging or other movement-twists and the slower, more strategic gameplay, the game felt a lot easier. There wasn’t much to ‘master’ in the department of skill aside from what items and mutants to use when and where. It does remove a layer of skill required and thus makes playthroughs a lot less satisfying, especially when they are so short.

Other than Hellmut’s main mode, which consists of trekking multiple floors of an infected laboratory while getting as strong as you can before your inevitable death – the game throws two extra game modes at the very beginning which allow Hellmut to have a bit more replay value in the long run.

Gauntlet is a wave-based game mode where you are tasked with defending a control point with 5000 health. With each wave, stronger, more intimidating creatures flock you, making each wave a test of your accumulated skills while playing the game. It can be a blast, and to make it better, multiple players can join in the fun, creating an extremely fun co-op mode which was probably one of my favorite bullet-hell co-op experiences on the Switch.

The game features a neat toggleable mode called ‘Tournament Mode’. I haven’t seen anything like this thus yet in a roguelike and it essentially allows you and another friend who owns the game to share the same seed for their game. It lets two players race to see who dies or finishes a run first and it’s a very interesting feature that I would love to see in more randomized roguelikes.

Hellmut’s soundtrack is just… metal. It’s so badass, so badass that I think that the game’s title should have derived directly from it. What’s so crazy about its already rockin’ soundtrack is that you can actually switch between two different choices: ‘Old School’ or ‘Modern Crap’. While the Modern Crap is filled to the brim with some actually recorded metal instruments with some absolutely rad riffs and tear-inducing beats, the Old School was my preferred preference, giving a real sense of nostalgia while still retaining the head-bopping madness that fit so well with the game to begin with.

The soundtrack is seriously good. And is the reason I made sure I always had my earphones in on full volume every time I played the game. The atmosphere feels gritty and old-school and my ears honestly enjoyed every single part of the well-composed tracks.

Hellmut’s graphics can be described with one word – crisp. It’s a take on the classic 16-bit games that has me wanting more. It’s theming and tone is dark yet fun and even in the most claustrophobic of corridors and tunnels, I found myself being sucked into this world that really fit together well. Every level of each dungeon felt alive with gothic symbolism and wading through the desecrated corpses with the mutants felt disgusting and gritty, everything I wanted from a more mature take of the genre. To make matters better, the game includes a  Gore Level and Permanent Gore slider, allowing the most hardcore fans looking to get a more DOOM-like experience to have what they want.

The game runs perfectly on the Switch, throughout my time playing there wasn’t a single frame rate drop or change in resolution. The game is very lightweight in its technical requirements and this is definitely a plus when you consider the number of sprites on-screen at once, especially in Gauntlet if you’re going to be going through high-level waves with another player.

I enjoyed Hellmut thoroughly, but there were a few glaring issues. Firstly, unlike other dungeon-crawling bullet-hells I’ve played, the enemies spawn patterns are very sudden. When you enter a room, enemies suddenly appear in a very frantic way in front of the player, sometimes so close and unexpectedly that it is literally impossible to dodge a bullet, making the player take damage (and subsequently get punished) for something out of their control.

Like I stated before, I wish Hellmut was more difficult or at least introduced some sort of mechanic other than transformation. While that mechanic is fantastic and really well-utilized, I found myself wishing that the gameplay wasn’t so basic.

Hellmut: The Badass From Hell is a seriously fun game. It’s addicting for what it is, and while there are some better options out there in terms of bullet-hell roguelikes, Hellmut’s atmosphere and theme is really what gives it such a unique identity, as well as it’s clever use of transformations.