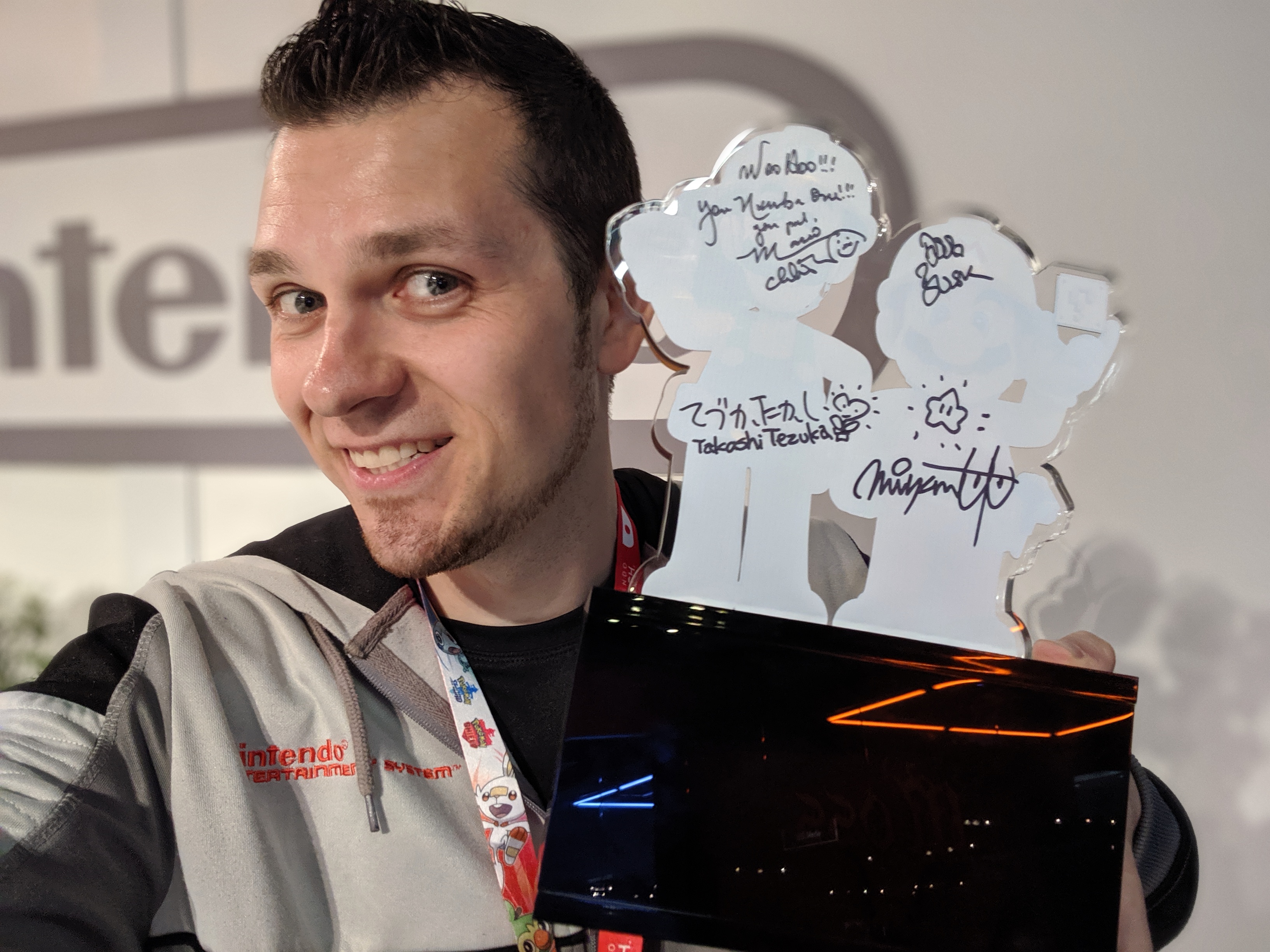 [Interview] He Came, He Saw, He Conquered – AbdallahSmash026 On Winning The Super Mario Maker 2 Invitational 2019

We at Miketendo64 do have some amazing opportunities to talk with some truly incredible people. In this interview, we spoke with YouTuber AbdallahSmash026 about his victory in the Super Mario Maker 2 Invitational 2019. We talk about how he was invited to the invitational. What it was like competing against the likes of The Completionist, his ultimate victory, meeting Takashi Tezuka and much more.

Miketendo64: First of all, we at Miketendo64 are thrilled that you have taken the time to talk with us. Congratulations on your epic win against The Completionist in the Super Mario Maker 2 Invitational 2019 at E3. While you are still reeling with adrenaline from all of the excitement, we would like to ask you some questions about your experience at E3.

To start off with, most people who are reading this will most certainly know who you are. For those that don’t however and saw your win at the SMM2 Invitational 2019, can you tell them about yourself? Who you are and what you do?

Abdallah: Thanks for having me.  My name is Abdallah and I run the YouTube Channel “AbdallahSmash026,” a channel that focuses on Daily, Family-Friendly Nintendo content such as Let’s Plays, Walkthroughs, Tips and Tricks, Unboxings, Previews, and Reviews of the latest Nintendo Games.  I’ve been uploading on YouTube for over 7 years and I’m an officially recognized member of the Nintendo Brand Ambassador Program.  I also more recently won the Super Mario Maker 2 Invitational!

Miketendo64: When did you first become “AbdallahSmash” and how did you get to be so popular today?

Abdallah: I was a Pro Super Smash Bros Melee Player back in High School and I wanted to showcase my skills on the up and coming YouTube platform, so I made an account named after Smash Bros!  As far as popularity goes, there’s no definite answer for that one. I’m mindful and respectful of my audience and everything I do is family-friendly. I give my honest impressions of the variety of games that I play so people can make their decisions on whether or not to purchase the latest games to play along with.

Miketendo64: How did you get invited to the SMM2 Invitational 2019? Did Nintendo reach out to you? Did you contact them? How did you feel when you were invited to take part in the Tournament?

Abdallah: Funny Story!  I was streaming the Super Mario Maker 2 Direct and as soon as they announced the Invitational, I said something along the lines of, “OH MY!  I’VE GOT TO STOP EVERYTHING I’M DOING NOW AND EMAIL NINTENDO TO SEE IF I CAN BE A PART OF THIS!” So, I emailed Nintendo about my intentions of being considered.  I was later invited to an exclusive hands-on event in New York to play SMM2 and I then found out that they had already submitted my name for the event even before I sent them the email! It was such an honor to be chosen as one of four people IN THE WORLD to be invited to the event.

Abdallah: The only practice given to us was about 10 minutes in Builder Mode with Dev kits earlier on in the day.  We did not get a chance to see any of those levels prior – a 100% blind surprise. Since I knew that Super Mario 3D World Physics were new and were going to be featured, I started messing around with climbing blocks with Cat Mario to see how exactly he played.

Miketendo64: After playing with The Completionist, Jirard Khalil on the same team, how did you feel when you had to go up against him in the finals?

Abdallah: I knew the format of the final round going into the event, so that wasn’t a surprise at all to me.  Jirard is a great guy and I wouldn’t have had the outcome of the tournament go any other way. I knew that he had experience in Mario Games and I knew I had to “out-skill” him in order to win.  It was a pretty exhilarating feeling knowing that two of the biggest YouTube Nintendo Talents were facing off against each other in the finals.

Miketendo64: Was there any kind of strategy behind who would choose who as a partner during the competition?

Abdallah: Absolutely.  I would have naturally picked Jirard in Round Two.  TheDragonFeeney is a very talented Super Mario Maker streamer who has been playing the game non-stop for years since launch – definitely a top contender when it comes to rivals in the competition.

Miketendo64: What was it like facing competition on levels you have never seen or played whilst being watched by millions of people around the world and more importantly, in front of a vast audience?

Abdallah: It was so much fun playing each of the levels blind and figuring out how to navigate them based off of the potential mistakes that you made.  I absolutely enjoyed seeing the audience cheer us on and GASP out loud if one of us was about to lose a life!

Miketendo64: What was the hardest obstacle you face during the SMM2 Invitational 2019 and what was the most creative use of tools that you say in-game?

Abdallah: I’d say that the hardest obstacle in the game was that little tornado enemy that moves like a red Koopa.  He wasn’t in the previous SMM, so I had a hard time figuring out when to press the jump button while inside him in order to get maximum height!  That little dude’s teeter-totter obstacle was harder than the final boss Bowser swing! I thought that the entirety of the Super Mario 3D World level at the beginning was the most creative use of tools because it showed off many of the new features!

Miketendo64: What did you enjoy most of the stages you played and what didn’t you like?

Abdallah: I really enjoyed the 3D World Stage at the beginning of the Invitational and I loved the New Super Mario Bros U Coin collecting Level the most!  You could tell by the end flagpole ‘dance’ that I did. I honestly didn’t care too much for the “Protect Yoshi” level, as it wasn’t as fast-paced as I would have wanted a level to be.

Miketendo64: How did you feel when you won the Final? What were your first thoughts when you realized you had won?

Abdallah: Both Jirard and I could see each of the big audience screens from our peripheral vision, so knowing that I was ahead of Jirard and seeing him struggle with the icicles while I figured out a rhythm was pretty intense.  The moment that I KO’d Bowser and made it to the final landing of the icicles, to drift downward on top of the axe to finish the level, was the moment I raised up my hands and knew I had it in the bag. It was one of the most satisfying moments of my YouTube Career!

Miketendo64: Can we expect to see Super Mario Maker 2 courses created by you when the game releases at the end of this month?

Abdallah: *laughs* Not likely.  I’ve always been someone who wants to play all sorts of fan-made levels rather than spending hours on making a single stage.

Miketendo64: When Takashi Tezuka presented you with your trophy, that must have been quite a historic moment for you?

Abdallah: Oh totally!  I’ve met him only one other time, during the E3 when Woolly World came out.  When he handed me that trophy, I felt truly accomplished! I totally thought that they would have me take the mic for a second and say some final words – I even had a speech prepared!

Miketendo64: When Mr. Tezuka revealed that he and some of his team had yet to beat the stages created by the Nintendo Treehouse team, how did that make you feel?

Abdallah: That made me feel pretty good!  Although, I still feel that Tezukua’s team didn’t get enough time with the stages.  I’m sure that they’d be able to do so.

Miketendo64: Will your Super Mario Maker 2 Invitational 2019 trophy be highly visible in future videos for your YouTube Channel?

Abdallah: Of course!  I’ll be hosting livestreams where I’ll be playing courses made by viewers and providing feedback along the way!

Miketendo64: Your name will forever be remembered thanks to your incredible performance and victory at the SMM2 Invitational at E3 2019. Did you ever think when you first started your YouTube channel, that not only would you one day become a Nintendo Ambassador? You would one day, be shaking hands with the legendary Takashi Tezuka and be a victor in a worldwide streamed event?

Abdallah: Never in a million years!  This event will go down in history and I’m so glad that I performed well enough to be a part of the invitational and end up taking home the victory as well!

Miketendo64: What would a 10-year old you say if he could see you now and what you have achieved?

Abdallah: “Wow.  Can I get your autograph and a picture?!  How did you do so well?”

Miketendo64: Thank you very much again, for taking the time to talk with us. We have watched you grow over the years and we have much respect for what you do and have achieved. Before you go, is there anything you would like to say to your fans and our readers? Is there any advice you could give to those aspiring to follow in your footsteps?

Abdallah: The pleasure is all mine!  Thanks so much for having me!  If you’re a fan of my content or if you just came around more recently from this article, I want to say that I’m really happy to have you.  Without fans like you all, I wouldn’t be where I am today. Each of the four invitees to the SMM2 Invitational 2019 was chosen based off of what they’ve been doing to impact the Nintendo Community in a positive light and I couldn’t have done it without the support of millions of fans and viewers out there!  Keep being yourself and striving to be the best that you can be.

If you have yet to check out AbdallahSmash026’s YouTube Channel, you can find it via this link. If you enjoy family-friendly Nintendo content, be sure to subscribe to his channel. We would also like to thank Adam Roffel for helping to organize this interview. We hope you and the rest of the AbdallahSmash Team continue what you are doing and enjoy every moment of it.