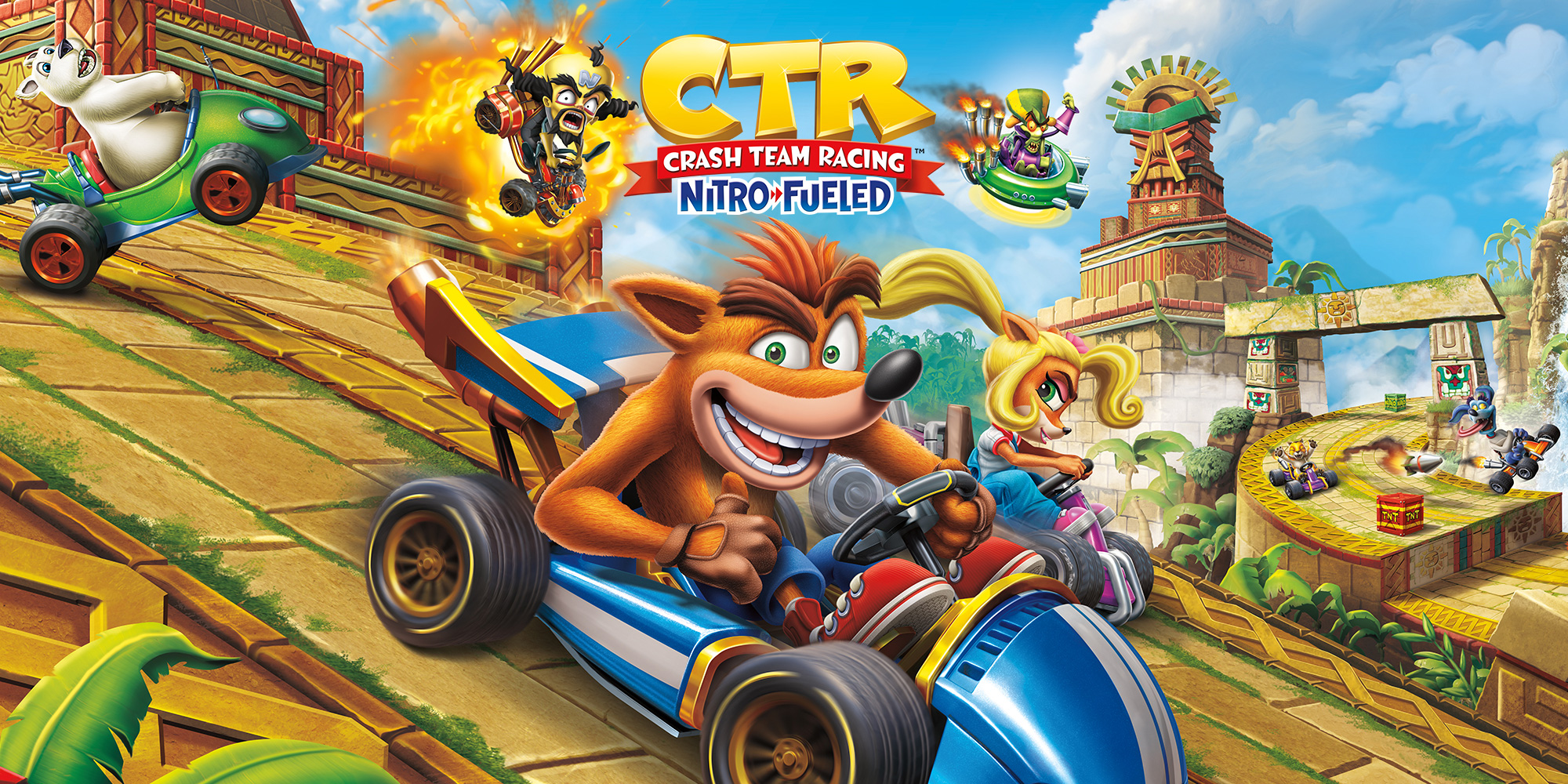 Crash Team Racing Nitro-Fueled sees Crash Bandicoot and friends return to their karting days in this remastered classic. Since it’s initial release on the original PlayStation way back in 1999, the Spin-off series of Crash Bandicoot only saw one other instalment in the form of Crash Nitro Kart.

Crash, Coco and Dr. Neo Cortex are racing each other, until one day a visitor from out of space comes down to Earth and tells them he is looking for a worthy opponent to race. He threatens them that if they fail to beat him, he will destroy the earth.

It might not exactly be Oscar winning material but it was after all, a simple plot to give an idea as to why Crash and his friends are racing in the first place. Not even Mario Kart 64 which came out in 1996, had a story arc as to why Mario and Bowser were racing each other as opposed to their usual “Bowser kidnapped the princess and Mario must rescue her” routine.

Crash Team Racing Nitro-Fueled is an arcade kart racing game that can be played with 1-4 players locally and up to 8 players online. 2-player split screen is supported in tabletop mode but docked mode is required for 3-4 players.Players must race against each other using any means necessary. Bump, bash and use a myriad of power-ups to launch an offensive or defend from behind. With 31 tracks to race on from Crash Team Racing and Crash Nitro Kart, there are plenty of different tracks for variety.

The three main modes of play are: Adventure, Local Arcade and Online. Adventure Mode is the single player story mode experience that allows players to race against the Extra-terrestrial Nitros Oxide in order to save Earth from Destruction. You can unlock Karts, Characters, Decals and more from this game mode and take part in extra challenges like the CTR challenge, Relic Challenge and Crystal Challenge.

Much like Diddy Kong Racing, The Adventure Mode has a large open hub-world to drive around in between race courses. You have to actually visit the locations on the map in order to play each track rather than select a course from a list or menu.

Local Arcade is where the main bulk of game modes are. Here players can compete alone or with friends in Single Race, Cup Race, Battle, Time Trial and the aforementioned CTR Challenge, Relic Challenge and Crystal Challenge.

You can choose to play up to four players locally and you can choose the difficulty of the CPU. It is worth noting that there is a lot of Rubberbanding regardless of what difficulty the CPU. Bear in mind that a single slip up will most definitely cost you what little lead you had. Fortunately, in Easy difficulty, you can quickly catch up with any CPU opponents in the lead.

In Single Race and Cup race, player race against each other to be the first across the finish line. In Battle, there are multiple sub-modes to participate in. These modes are playable with a minimum of 2 players. There are no bots in the Battle Mini-games so you will need to get friends or family round to make the most of these modes.

The Challenges are single player only as well so you can’t work together in order to get the fastest time possible in collecting all of the crystals or the CTR letters. It’s a bit of a shame but at least the game does have a good amount of single player content, unlike other games that have a barebones solo campaign and depend heavily on the multiplayer modes.

The Online mode allows you to race other players around the world. This is a feature that was never in the original game as Online play had not made it home consoles back then. Playing Online can be quite unforgiving as everything you learned in Adventure mode and playing with friends no longer counts for toffee. You learn the hard way that Human players with a fair amount of free time on their hands will make it their mission to lap you unless you can keep up the pace.

It seems you can’t have a racing game these days without a decent amount of customization. Alongside the 26 characters available in-game (with more on the way via DLC) there are 6 different kart bodies, 5 types of tires, 22 paint jobs and 51 stickers. Each character has a number of skins and outfits that you can change them up with as well.

For those that like to keep an eye on their progress, you can check out your best times in the High Scores Setting in the main menu. From here, you can see what your best times are on each course in Time Trial and Relic Race modes.

For anyone struggling to get to grips with the control scheme, you can change to an alternate scheme. I myself found the standard layout counter-intuitive. Having the accelerator, brake, HUD change display, use item and the pause buttons in the same place had you risk losing speed in order to perform another action with the same thumb.

The alternate layout on the other hand, was much easier. Acceleration is mapped to the ZR button, which allows your thumb to operate the other buttons more fluidly.

This may become more of an issue when Activision starts releasing its online Grand Prix season content. Some items available in these seasons can be purchased with Wumpa Coins but if players can’t earn them without being constantly online, they will miss out on purchasing the new characters or items.

The Game’s music is a revamped form of the original soundtrack. It is funky and energetic much like the original but a lot cleaner as well. For those that prefer the original music, it is still accessible in the Audio Menu under the ‘Legacy’ option.

Crash Team Racing Nitro-Fueled is not just a HD remaster of the original game. It was not just given a fresh coat of paint and resold. The Development team redesigned everything. They even added new details that were never in the original game. The finished result is very visually pleasing and just looks amazing.

With that said it does suffer somewhat in handheld mode. There is a slight fuzziness to character models as the resolution is reduced to 480p, which is more noticeable when taking screenshots. When looking over the screenshots that you have taken in the game, you can see that it is not as eye-catching as you originally thought. When docked, the resolution is boosted up to 720p but it could have been improved up to 1080p.

As regards to performance, Crash Team Racing Nitro-Fueled does seem to hold its own. With a very steady 30 fps, which might seem low compared to other racing games on the Nintendo Switch. Then again, it could be forgiven when the game is trying to stay as faithful to the original that also ran at 30 fps on the PSX. Some people have noted that there have been some soft crashes but I had yet to experience any of these instances myself.

As Kart Racing games go, Crash Team Racing is very much like Diddy Kong Racing than it is Mario Kart. The adventure mode gives some meat to the game for those looking for a solid single player experience. It does seem to have incredibly long loading times between modes. Fortunately, between restarts, loading times are much, much shorter.

Depending on the difficulty you chose in the beginning, the AI can be extremely unforgiving. In Easy Mode, they can fly pass you but will reduce speed, giving you a chance to catch up and retake the lead. In the other difficulty modes, You will be lucky to make 1st if at all.

The Challenges can be incredibly difficult at times, with what feels like next to impossible completion times. The CTR challenges not so much if you have the AI difficulty on Easy. The Crystal Challenge and Relic Race though will drive you literally around the bend after what feels like the hundredth time of trying. If Crash Bandicoot is the “Dark Souls” of Platformers, Crash Team Racing Is the Dark Souls of Kart Racing Games.

The most important thing I should bring up is the differences between the Standard Nitro/Fueled version and the Nitros Oxide Edition. Other than the $30 difference and a few extra exclusive skins, it is unfathomable as to why the Nitros Oxide edition is so much more expensive. You may get immediate access to the hovercraft vehicle but it is unlockable in-game after 100% completion mode anyway. All that I can assume is that, any DLC that gets released at a later date will be free for the Nitros Oxide Edition.

Crash Team Racing Nitro-Fueled is one Kart Racer that has stood the test of time, thanks to it’s “From the ground up” Makeover. It can certainly give Mario and Sonic a race for their money and with all three mascots on the same console, it actually can.

*A Physical Cartridge was purchased for the purposes of this review