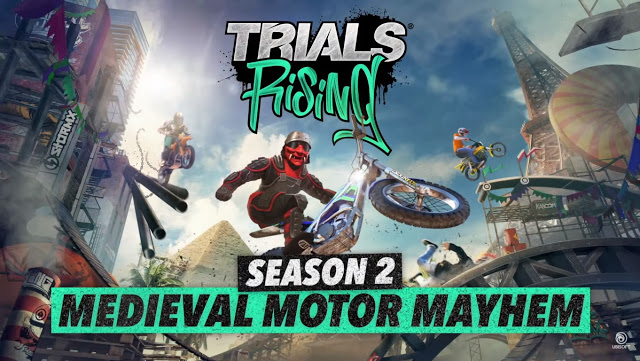 The newest season for Trials Rising has been announced by Ubisoft and brings some renaissance flair with it. The Trials Rising Season 2: Medieval Motor Mayhem is now live and will have all new seasonal rewards, new bikes and 5 new medieval themed stages to ride down and make some serious air with.

You can check out the full list of details below for Trials Rising Season 2: Medieval Motor Mayhem and a trailer for the game.

Season 2 brings a new season of ranked multiplayer and a new seasonal reward. Climb your way through the divisions to earn different parts of the Golden Ronin outfit to be awarded at the end of the season.

If you have ever wondered what a medieval shopping cart would look like, Season 2 has got you covered with its debut of a new ride: the Shopping Cart. This unique bike presents new challenges as you can only control the cart, and your rider has to stay in the cart while you make your way through select courses. Accompanying the Shopping Cart is a new Track Pack to explore the Faire with five all-new, medieval-themed tracks.

Alongside the new multiplayer rewards comes a wealth of new customization items, which will arrive regularly throughout the season. There will be two new rider outfits, the Ronin and the Knight, as well as two new bike skins. In addition to these outfits and skins, there will be four new knight- or samurai-themed headlights, ten new themed helmet accessories, and ten new themed stickers. Once you have decked out your rider and bike to your heart’s content, you will be able to showcase them in new ways, thanks to the addition of five new loading poses, five new victory animations, and two new lose animations.

Season 2 will bring a special limited-time Summer Event in July. This will include a new Summer Swimsuit outfit available in the store or through the Summer Event Gear Crates, a summer-themed headlight, and eight helmet accessories. Be sure to collect all the ice cream cones hidden across various tracks to claim an exclusive helmet only available through this Ubisoft Club challenge!

Keep your eye on the official Ubisoft Twitch channel during E3 and other big events to unlock the special Sentai helmet!