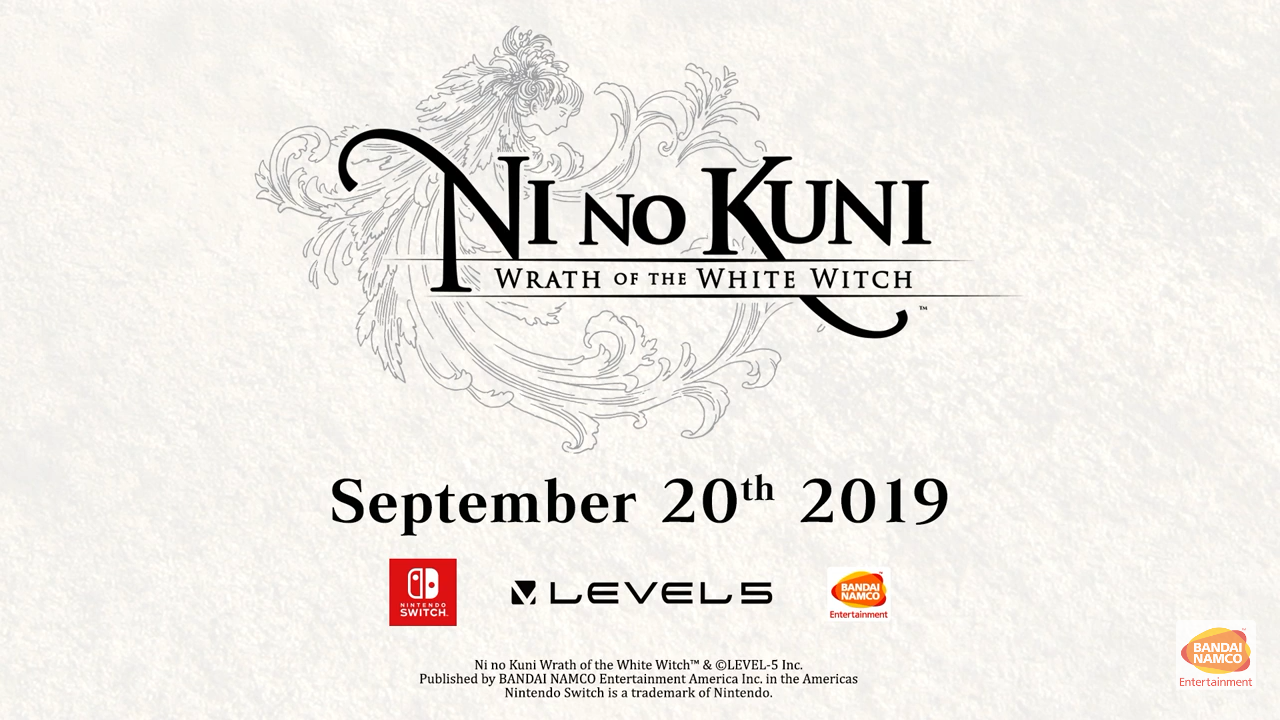 Ni No Kuni: Wrath Of The White Witch Comes To Switch This September

We have the official announcement below as well as a the E3 Announcement trailer.

THE BREATHTAKING WORLD OF NI NO KUNI: WRATH OF THE WHITE WITCH COMES TO PLAYSTATION 4, PC AND NINTENDO SWITCH ON SEPTEMBER 20TH

Ni no Kuni: Wrath of the White Witch Making Portable Debut on Switch, Remastered Edition Arriving on PlayStation 4 and PC

Ni no Kuni: Wrath of the White Witch Remastered on PlayStation 4 and PC features brilliant new visual enhancements, letting PlayStation 4 players enjoy the game at 1080p resolution and with a super-smooth frame rate of 60 frames per second (fps). PlayStation 4 Pro users can also opt for true 4K resolution at 30 fps, or 1440p at 60fps. Ni no Kuni: Wrath of the White Witch on Nintendo Switch is the first handheld iteration of the acclaimed title, letting Switch players experience the game in 720p resolution at 30 fps in TV mode at home, or in handheld mode on-the-go. The game retains its original dynamic fight system, combining real-time action and turn-based tactical elements, as well as the dozens of locations and hundreds of creatures that comprise the vast universe of Ni no Kuni.

Originally developed by LEVEL-5, Ni no Kuni: Wrath of the White Witch’s story unfolds through animation storyboarded and created by the legendary Studio Ghibli, with music composed by award-winning musician Joe Hisaishi. Ni no Kuni: Wrath of the White Witch tells the charming yet tragic story of Oliver, a young boy who embarks on a journey to another world in the hope of bringing back his mother following a tragic incident. With a copy of the Wizard’s Companion in hand and his pal Drippy by his side, Oliver must traverse exotic lands to tame familiars, take on malevolent foes, and overcome the countless challenges that stand between him and his mother’s salvation.

“For those who missed this amazing adventure, or those who would like to feel the magic again, these two Ni no Kuni: Wrath of the White Witch releases represent the perfect opportunity to get lost in a world of wonder, danger, love, and friendship,” said Randy Le, Brand Manager at BANDAI NAMCO Entertainment America Inc. “A beautiful and compelling tale told by expert storytellers with a heartbreaking score, Ni no Kuni: Wrath of the White Witch stands alongside the best games of the last generation. We’re excited to let gamers rediscover this rich world on modern systems.”