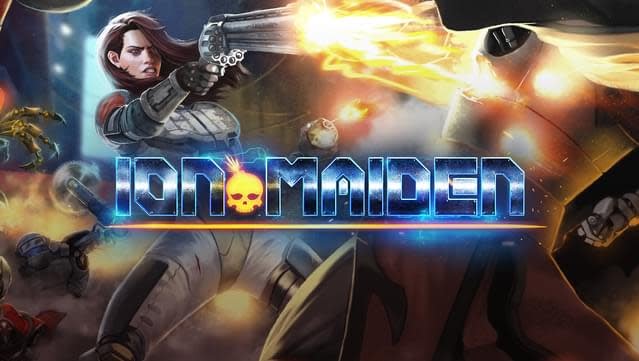 Whilst the headline “Ion Maiden Being Sued By Iron Maiden” would be more clickworthy, we at Miketendo64 try not to mislead readers with one thing and deliver something else. This seems to be the case with 3D Realm’s Game Ion Maiden and the legendary Rock Metal band Iron Maiden. Or so their holding company will have you believe.

The holding company have filed a lawsuit against 3D Realms in the Central District of California Court on May 28th. The reason being that the logo for the game causes confusion and leads to fans believe that the band is somewhat affiliated with the game.

“Defendant’s misappropriation and use of a virtually identical imitation of the Iron Maiden trademark creates a likelihood of confusion among consumers. Customers who view Defendant’s video game and merchandise are likely to believe that Iron Maiden is somehow affiliated with Defendant.”

The company also want to take down the website www.ionmaiden.com or have it handed over to them

To be fair, similarities to name and font are certainly nods to the Rock metal band and shows that the game Devs obviously have a love for the group and their music. Though I doubt if the members of the band ever heard of Ion Maiden before this ruckus, the holding company should have seen it as an opportunity to market the band in videogames and get their piece of the pie. If MötorHead could do it with Victor Vran, imaging if Ion Maiden had a soundtrack written and performed by the legends of Iron Maiden? The game would certainly sell more copies and Iron Maiden would have seen their fair share of the profits.