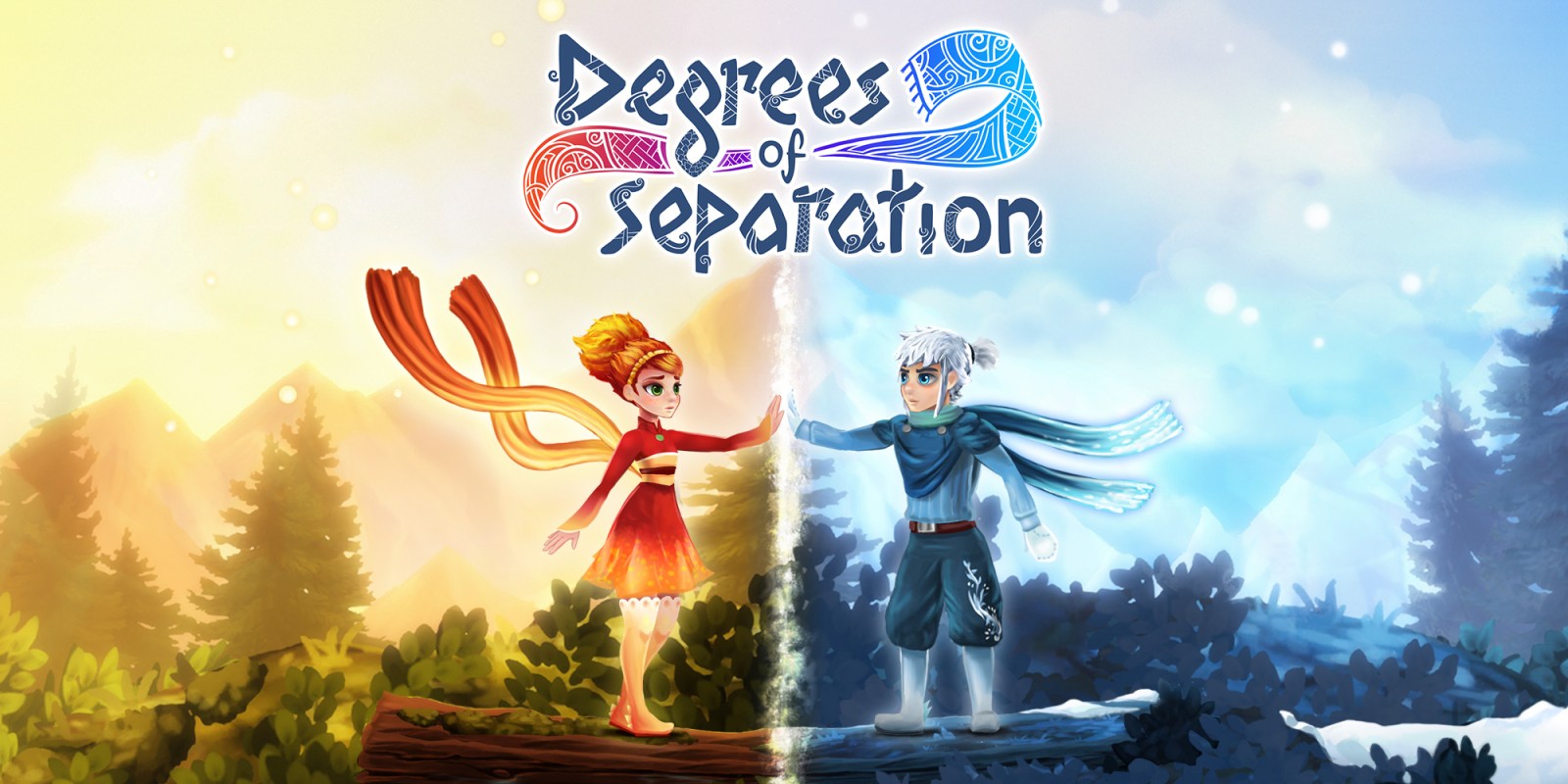 Degrees of Separation dropped on the Nintendo Switch in February in time for Valentine’s Day. The game itself is a story, not necessarily of love, of a friendship that builds over the course of the game through Ember and Rime.

The story comes from the mind of Chris Avellone who has worked on titles Icewind Dale and Baldur’s Gate series, Neverwinter Nights 2, Planescape: Torment, and Fallout: New Vegas and many more.

The game, while being playable solo, is infinitely more enjoyable, and at times easier to complete many of the puzzles due to being able to communicate with another human versus having to rely on the AI or controlling both characters independently.

Degrees of Separation starts off with the players controlling either Rime or Ember. The pair awaken to an event that seemingly brings them together across their independent realms as their worlds crash together.

Rime is from the frosted world and can turn water to frozen ice, create snowballs and stop the hot springs from propelling either character forward. In contrast, Ember exudes the warmth of summer and therefore can sink into the water, light lanterns that often raise platforms or reach the heights of out of reach areas by entering the jet streams of the hot springs.

Your journey starts off with the pair entering the castle and tasked with collecting magical scarves which are littered throughout the areas of the castle and the grounds around it. By collecting scarves, essentially solving environmental puzzles, you can progress further through the castle and enter new locations that are locked behind gated doorways.

In the castle, and within the first outlying area, Ember and Rime, work together using a very basic set of moves. Like I mentioned above, the puzzles primarily revolve around this separation of their two worlds, warm and cold, and how that affects the environment.

Oftentimes you may find ropes that when one character hangs on them they lower so that the second person can also climb up. While working together with your human character some of the puzzles may require specific placement of Ember and Rime so that the warm or cool sides of the screen highlight an object or platform specific for that character.

I found that with some of the more difficult puzzles I would scratch my head and pause to look over the landscape and getting a solution, it feels pretty good due to figuring out the puzzle on my own.

As you progress through the castle you will enter various parts of the world that will change up the split world mechanic in various ways. In the second area, Ember and Rime learn an ability that creates a bridge between them.

The bridge allows for some interesting puzzle mechanics like creating a ‘hardlined’ barrier between warm and cool regions allowing for traversal throughout the map that would not have been possible in the previous section.

There were a few puzzles here that used the bridge mechanic to move platforms up and down while creating a barrier so that lanterns were lit in a certain order. I found some of these puzzles to be done particularly well and invoking out of the box thinking when working to gather a scarf in a particular room.

In another area, Ember and Rime are able to create an energy blast when they touch. This bomb-like blast can be used to break rocks or jettison one of the characters upwards towards platforms, ropes, or scarves.

Personally, I found some of the puzzles in this section to be truly unique in their approach and a nice departure from the previous puzzle types. The hardest part though in this section was when my partner and I would blast one another unintentionally when we got too close to each other.

Another ability you get to use towards the end of the game is a coat that you find that can be swapped between the characters. This ability lets you hide either Ember’s warmth or Rime’s cold and inherit the opposite ability which creates some interesting puzzle combinations like freezing water to reach higher areas.

This ability is also one of the more visually striking moves in the game, as for the first time you see the world either in all cool blue and grey hues of Rime’s land or the orange, red, yellow warm tints from Ember’s world.

As you are gathering scarves in each stage you also will come across stone arches that act as the fast travel mechanic. Entering the arches turns you into a butterfly which then can zip between any previously reached arch.

This extra additive made some traversal a lot easier since revisiting some areas meant having to solve the puzzle again to reach the side of the room. Since there were times throughout my playthrough that I felt like skipping a puzzle or gathering a scarf, the fast travel made it easier to revisit a room.

In some ways, Degrees of Separation has a metroidvania aspect of it where you can return to a room to complete the puzzle later if you need more scarves and finally understand how to solve a particular puzzle.

When you make your way from room to room gathering scarves the story of Ember and Rime begins to unfold more and more. The narrator in the game oftentimes will hint at puzzles within the castle and areas of the world, as well as the story of the dragons, magic, and the king ruling over the land.

I thought this aspect of the game was very well done since it was subtle and told the story a few lines at a time throughout the game. This also reminded me somewhat of games like Bastion where the narrator feels more natural in telling the game’s story as I find scarves and solve puzzles.

Degrees of Separation has a subtle orchestral mix throughout the game. There’s not much to be said about it, other than that it fits really nicely into the overall tone of the game, either the feeling of fantasy or the underlying tone of separation and loneliness.

There isn’t much in the game as far as audio. Ember and Rime have some subtle grunts and noises they make as they jump and climb throughout the world. As you play, you can also call or halt the AI character by calling them towards you or having them wait. This allows you to position the second person strategically to solve puzzles or follow you on to the next section of the level.

Visually the game has almost a stained glass/painterly look to it. I found the contrast between the worlds to be an interesting mechanic that revealed either a harsh cold world of ice and snow or warm grassy field.

The foreground and landscape seem to dance behind you as you switch locations with either Ember or Rime during your trek through the world. This visual change is a character in the game and the main hook for Degrees of Separation.

Degrees of Separation has some minor quirks and flaws. Sometimes I found my character could get stuck against the environment and wouldn’t jump or climb up from the leg they were holding onto.

These usually weren’t too big of a problem, but it’s something to be noted as those times where either character wouldn’t move in the way you think they would or get locked in an animation for a few extra frames.

There seemed to be only a few times in the game where either the narrator or the subtitles on the screen seemed out of sync. I feel like this was either just an oversight or an actual lag in the game, though I never had any issues with my characters slowing down or frame rate drops. I play mostly in docked mode throughout the few hours it took me to reach the ending.

The game looks gorgeous in either handheld or docked mode, however while playing with my daughters docked mode was preferred just so we both could see the game better on the TV. There are a few games on the Switch, or other systems for that matter, that are similar to Degrees of Separation in how they are best played with a friend.

Couch co-op puzzle games like Overcooked or Pode are something I really enjoy. I like how these multiplayer games, especially Pode and now Degrees of Separation remove the combat aspect found in most games and require precision platforming and co-op puzzle solving.

If you have a Switch, and a partner to play games with, Degrees of Separation is a great addition to your Switch library. The game isn’t difficult, though some puzzles will require more thinking than others.

Solving them with a friend and journeying through Ember’s and Rime’s worlds is enjoyable and tells of a tale of two people in stark contrast to each other and how they came together to free their land from dragons and an evil. I highly recommend this game for anyone looking for a more laid back puzzle, platformer game for Switch.