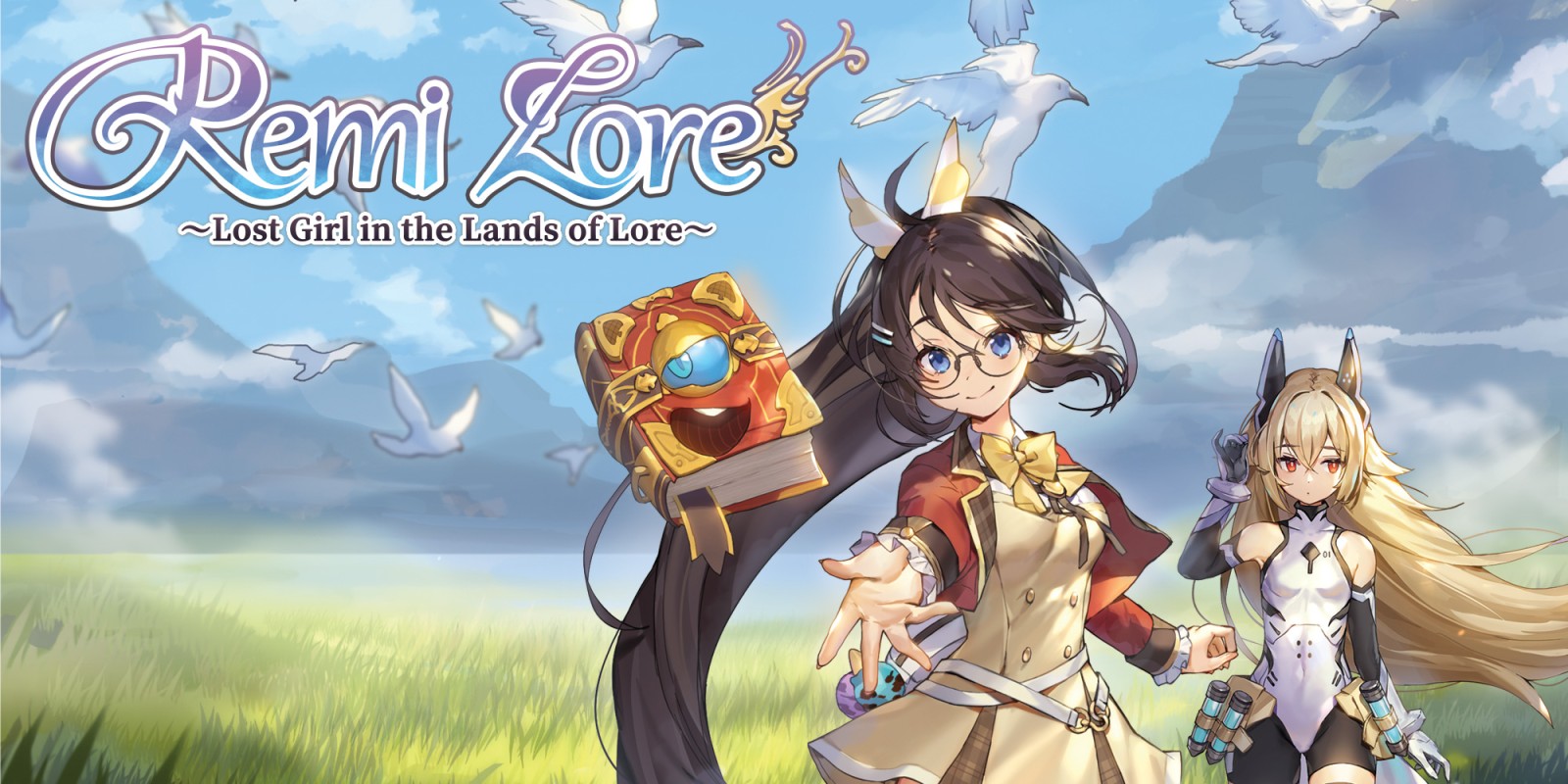 What happens when you take the classically beloved Diablo framework and inject it with a ton of anime and replace the demons with mechs? RemiLore provides a fair representation.

RemiLore: Lost Girl in the Lands of Lore begins our story with Remi, a student serving out her punishment by being made to sweep the library. While performing her task, she finds a sparkling book on the table, and upon dusting it off, it awakens (!) and casts a teleport spell to escape danger.

The book, the Grand Grimoire known as Lore, accidentally brings Remi along with him to his home realm of Ragnoah. When Remi prompts him to take her back, he informs her that he has drained most of his power in bringing them here, and now Remi must assist him in finding their way back to a portal and helping him regain his magical power along the way. We get some narrative dialog at the beginning and end of each level that we fight our way through with the magical duo.

During each given level, Remi and Lore will converse with each other, usually consisting of Remi complaining about being hungry or asking Lore questions about the world. Lore tries to be accommodating, but often stops before arriving at anything too useful, and often just doesn’t answer.

The in-level banter is amusing at first, but you start seeing the same exchanges multiple times, even on the same playthrough attempt…and I quickly just stopped paying attention since the only discussion that matters is what happens at the beginning and end, as mentioned above.

RemiLore is a rogue-lite action game that draws most of its Diablo comparisons, my own included, due to its isometric camera angle, action combat, and looting. It is, however, more of a rogue-lite in execution. Whenever you die, you start over from the beginning of whichever act you happen to be in the midst of.

Thankfully you don’t have to start completely over, but it does feel a bit more of a punishment when you die in level 3 or 4 instead of 1 or 2. Each time you enter a new level, the layout is randomly generated. Each level consists of a number of enemy rooms that vary in size and density of enemies, and these are broken up by corridors with breakable objects to provide you with desserts.

Defeating enemies also provides you with these same desserts, and these desserts will act as your upgrade currency. You can use this currency to upgrade weapon proficiency, magic spell effectiveness, reduce shop prices, and increase potion efficacy.

Gratefully, you can upgrade all of these different features on the go, and they are permanent. When you die, you will lose some of your desserts, but all of your previously purchased upgrades will remain.

Each level contains a room with a mini-boss fight, and these are usually just mixed in with the rest of the goons, although you’ll immediately know if a boss is present in a room because their health bar will be displayed across the bottom of the screen. At the end of each act, you will face a more powerful boss, and then be treated to a cut-scene further advancing the story.

I’ve glossed over a fair amount of the story details beyond the introduction on purpose. For the biggest reason, I always try to avoid spoilers as best as possible during any review. In this situation, however, it is because it is a fairly barebones plot that ties the events together.

There are some interesting turns, but the game is mindless hack n slash at it’s finest. So, the plot is there, but it could have not existed at all beyond “you’re a girl in a magical world with a spell-slinging book familiar” and would be equally enjoyable.

Combat in RemiLore is where the meat of the game lies, and it is well executed. You have two main attack buttons- A and X. Depending on which weapon you have at the time, one or the other is your fast/slow, weak/strong, etc/etc attack. Pushing the buttons in different sequences give you different combo attacks to fight off the hordes of enemies.

There are over 200 unique weapons in the game, and they’re ranked from D on up to S. Mastery of different weapon types unlocks more, and they can be discovered in treasure chests found at the end of levels. Lore acts as Remi’s familiar, and utilizes different magic spells depending on the equipped weapon.

If you die, you will continue with the same weapon. Each different weapon type has a different play style to it, and learning how to best utilize these types is essential to your survival because of this restriction.

In addition to melee and magical attacks, you also have a dash option that uses a stamina meter that can be used for blocking, setting up strategic attacking spots, or just getting around the dungeons. Short tap B for a quick dash, and hold B for a long dash.

Learning to make all three of these abilities work in concert with each other is very satisfying. Combat also never feels cheap, because most rooms are large enough to take a moment to recover when you’re taking heavy damage and need to regroup a little bit, but not so big that you lose track of where the enemies are, although there are on-screen arrows that indicate where they are just in case.

As you clear rooms, you will earn a rank depending on how well you did clearing out the enemies. This will take into account damage done, time spent, and combo performance. Each of these factors will receive their own letter score, and then averaged out for your final room score.

At the end of the level, you will be shown each of the previous room scores and those will then be averaged out to give you a better chance at more treasure. Each rank that you earn can potentially open up another treasure chest- which will produce a random weapon.

Any given weapon can look and be named identically to another, but might have different damage range stats or a different spell for Lore to use. In addition, you will be presented with mercantile pedestals that have a potion or weapon for purchase using the same dessert currency you use for upgrades.

There are training dummies present to let you test out your new weapon before leaving, and you can freely swap between them until you exit. Once you leave, though, you’re committed to that weapon until you find a new one.

RemiLore provides an easy to use menu system to give you vital information about your weapon, provide a home for your upgrades, give you the ability to save, restart, or quit the game, and provide a cool gallery of sortable weapons that you’ve discovered so far. The gallery of already discovered weapons is just a nice bonus that makes the game feel more lovingly crafted.

I’m a gamer that actually finds rogue-likes to be incredibly frustrating. While I appreciate a good challenge in my gaming experiences, I don’t like dying and feeling like all of my progress was basically meaningless.

While roguelikes always have some unlockable system that carries over into new attempts at the game, RemiLore does a great job with its upgrade system and start over at the current act (instead of starting all over at the beginning) at making the game feel less like a punishment and more like a fun way of extending the experience.

The game runs very well, and the graphics look great. I wish that the game gave you the ability to store one or two potions to be used when you wanted.

I would often clear rooms and have a monster drop a health or mana potion when I was full on one or both, only to desperately need that potion in the next room, but be blocked off from going back to it since the game traps you in a room until the enemies are clear.

I also feel that RemiLore has a pretty fair difficulty level. It never feels too difficult, but you can find yourself in difficult situations if you’re dealing with a new enemy or have a new weapon and/or spell that you haven’t quite mastered. Considering this is overcome by just practicing and becoming more skilled..it is exactly how it should be.

RemiLore tells a good enough story to keep you moving forward through its dungeons full of mechs, but doesn’t bash you over the head and distract you with it. While the combat can sometimes feel a little repetitive, its light-hearted atmosphere and fairly quick dungeons make it perfect for bite size sessions.

Drop in, clear out a few dungeons, get to the next act, save and quit, which should take about 10-15 minutes. The randomness of the weapons adds a bit of humor to the game, and sometimes you’ll find yourself hopping on just to see if you can unlock a pink flamingo that uses freeze magic. Even if you’re not into roguelikes, any fan of fun hack and slash titles is going to get a lot of mileage out of RemiLore.