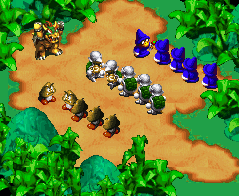 Consequently, Super Mario RPG: Legend of the Seven Stars is a game that excels in countless areas. In materializing the rather unlikely marriage between the platforming world of Super Mario and the role-playing greatness of the classics produced by Square during the nineties, it ended up creating a sub-genre of its own: a class of games where thick scripts and turn-based battles meet exploration segments that marry the walking usually done in RPGs with external elements such as action and puzzle-solving. With that combination as its basis, the game assembles a quest that – more than any other Mario game before it – gives life to the Mushroom Kingdom while miraculously succeeding in embracing RPG fans and newcomers to the genre that are naturally attracted to games starring the popular plumber. And even if some of the role-playing quests undertaken by the character ever since have presented more alluring scripts and a wider deck of options, Super Mario RPG: Legend of the Seven Stars retains its position not just as a major pioneer, but as a classic due to how nowhere else in the usually fantastic sagas that were heavily inspired by it can one find such a pure balance between RPG traditions and the quirks of Mario’s universe.

via Super Mario RPG: Legend Of The Seven Stars — Nintendobound