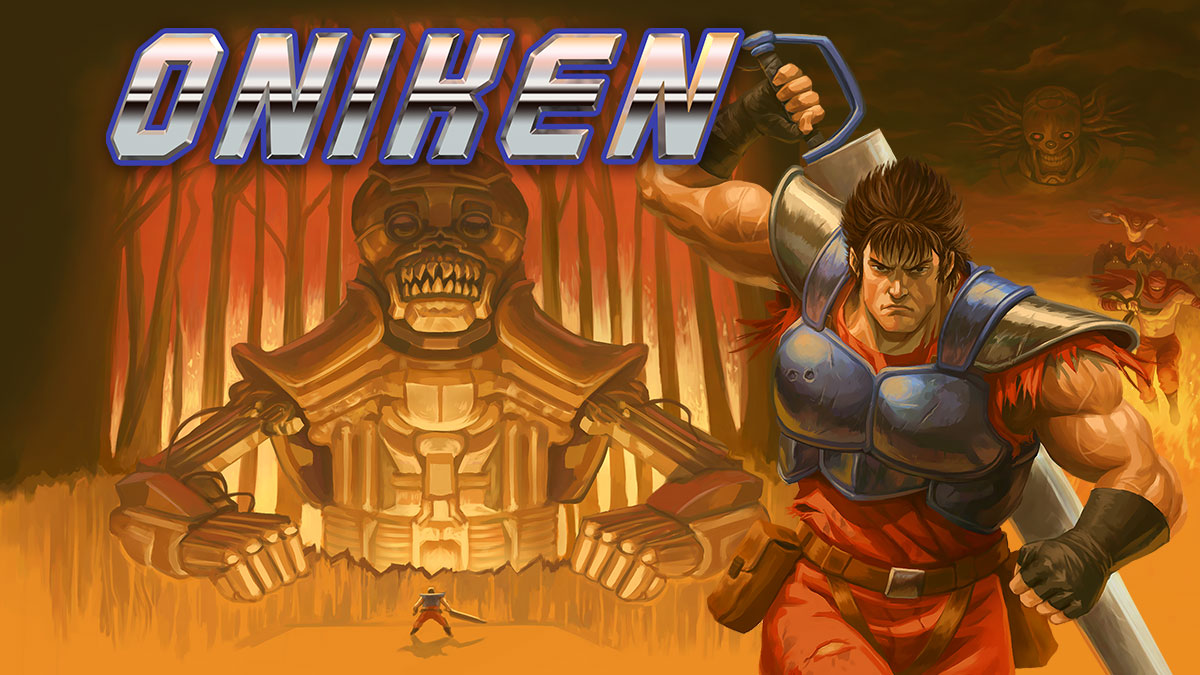 While there are many indie games that try to utilize retro-style sprites and music to evoke a sense of nostalgia for the simpler times of yore. Time past of trying to figure out exactly what a bit was, and why that mattered in how good a game really could be. Oniken, however, is one of the few retro style games that actually feels exactly like it was designed for the era. For better, and sometimes a little worse, we have a faithful reenactment of what feels like a long lost release for the Nintendo Entertainment System.

Upon first glance, Oniken might resemble perennial classic action platformer, Ninja Gaiden. Stylish cut-scenes, a sword-wielding mercenary chopping their way through foes, and easily deciphered boss patterns. However, once you actually get into the world of Oniken, you quickly realize that it more closely resembles relatively hidden gems like Vice: Project Doom, and Kabuki Quantum Fighter.

This isn’t a bad thing, as those are some solid titles in their own right, but those coming into the game with expectations of tight platforming, wall jumping, and a sense of satisfaction formed from overcoming a particularly tough spot to navigate aren’t going to find that. While the cinematic style cut-scenes still play out a bit more closely to the Ninja Gaiden inspiration, there is a much bigger emphasis on moving forward and slashing enemies than on well placed jumps and precise platforming.

Now that the comparisons are done, and I’ve cleared up any confusion or misconceptions, let us jump into the game, proper. Oniken, as I mentioned, is an action platformer. You have two main buttons- A to jump, and X to attack. Controls are very responsive, but you do have a somewhat slow slash speed with your sword, which will guide your approach to any given enemy, particularly those whom you haven’t faced before. There is an ok amount of variety in enemies, within missions and throughout the game.

The collision detection is very precise, but inconsistent across enemies. You’ll have to hit the enemy just right to damage it, and some just seem to take too many hits. Fortunately, your slow slash speed mentioned above also means that you can sometimes turn around with your sword out and attack a second enemy approaching from behind.

Each mission is broken up into two levels, and reaching the end of one level acts as a checkpoint. If you die, you start the “level” over, and you only get 3 lives before a game over. Every time you complete a mission, the game saves and you can then start from the next mission, or replay the missions you have already beaten. While I mentioned earlier that there was a bigger emphasis on action than platforming, wasn’t to say that the level design is poor. More importantly, however, is that they try to keep the platforming fresh and exciting by throwing in some levels with different gimmicks throughout. There’s a level with falling rocks that need to be avoided, a jet-ski (Personal Watercraft) level, a level where you’re racing against rising lava, and so on.

Unfortunately, these levels are just kind of thrown at us without warning, and as such, we were not able to build up the skills necessary to deal with these hazards and differences in play style. So, the positive is that every level has its own unique feel, and it never really feels repetitive. The con here is that losing lives to learn the new level is basically a given. It is frustrating to make it past one level, and then immediately die at the beginning of the next.

While you will at least start again on the level you died on, if you have to use 2 lives to get through the first level, and then lose your last life just to learn of the hazard in the second level, it is frustrating to have to start at the beginning of the previous odd numbered level and have to work your way through it again, but with fewer deaths. This is a hallmark of NES games- extending a game’s length by designing an intentionally more difficult game. There are also some secrets sprinkled throughout the game in the form of breakable walls.

After you become acquainted with the basic premise and layout of the game, it is to be noted that you also have a sub-weapon (grenade), and this is thrown by pressing up and X, similar to how the original Castlevania games dealt with button restrictions. When you’re on the jet-ski, you throw the grenades behind you. Oddly enough, however, they still chose to utilize a third button that has one purpose- and that is B, which puts you into a temporary berserker mode that makes you blink red and impervious to the attacks of enemies.

You literally just run right through their bodies, even their shields if they are holding them. Unfortunately, this berserker mode is never explained in the game…I just happened to stumble across it by accident. I believe that you can only use it once per mission, and it just refills when you get to a new mission. I say “believe” because I played most of the game without knowing it was there, and then seldom remember I have it until I get stuck on a boss. There is also a sword power-up that you can pick up represented by a sword with a knuckle-bow that doesn’t make you hit harder, but acts as a shield (you get two additional “health” bars that will be depleted before your actual health goes down).

There are mini-bosses and bosses to be found during a level, or to end them, and after you defeat the boss you are treated to a cutscene that gives us some more narrative. This is also like most NES era games in that it’s fairly forgettable, but does a great job explaining where you are going next and what you are expected to do. The basic premise, however, is that you’ve been hired as a mercenary to take on an opposing army using strange tech to overpower what should be an impossible force.

Oniken hits all of the beats that you would expect from a cheesy eighties video game. Characters that are distrusting, rude, but still come off as badasses. They seem familiar enough from action movies, but only because they’re all one dimensional and don’t really go through any kind of character development, but you’re not here for that…you’re here for the explosions. Smooth combat with fun sprite and character animations/sound effects. You lop off heads of certain enemies, and it is sickly satisfying. Some graphic cut-scenes, and a lot of rocking music in minor chords that sounds super industrial.

Nevertheless, the boring color palettes return, further blurred by a scan line filter that more or less accurately recreates the look of playing an 8-bit game on an old tube TV. In addition to the throwaway story and characters, the somewhat inconsistent hit detection, and the rad music… Oniken’s biggest flaw is in its inherent cheapness.

While I appreciate the accurate representation of what an NES game would feel like made for a modern system (something that even Shovel Knight gets wrong in the best ways), it also knocks the game down a few pegs for being a little too authentic because of enemies that appear out of nowhere when you walk on screen, especially those that throw things at you as you jump across a pit and the knock-back kills you. If Oniken actually released as an NES title midway through its lifespan, it would be impressive. As it stands, ignoring some cleaner aspects of modern design that improve quality of life and ability to just escape and have fun would have gone a long way.