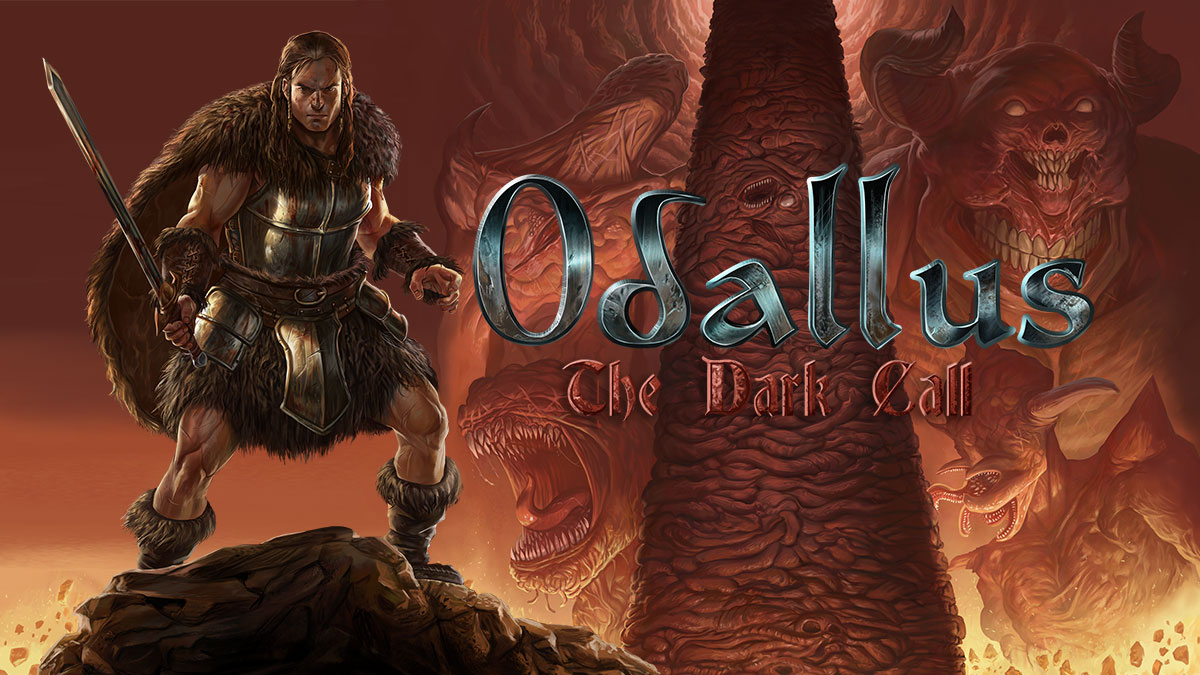 To go along with the recent release of retro -style action platformer, Oniken: Unstoppable Edition, Digerati has also treated us to the equally nostalgic feeling Odallus: The Dark Call on the same day.

While Oniken drew much of its inspiration from lesser-known action platformers that have fallen into relative obscurity (save Ninja Gaiden), Odallus: The Dark Call takes its main inspiration from the Castlevania series. While it doesn’t quite have the swappable playable characters with their own unique abilities as Castlevania III: Dracula’s Curse did, it still leans most heavily on this entry in the series. There are different skins that you can apply at will to your sprite from the pause menu, but they play identically to one another.

Interestingly enough, Odallus: The Dark Call even takes some inspiration from the Igavania-style found on later platforms, in that there are relics that you can obtain that give you new methods of traversal and access to heretofore impossible to reach areas that hold secrets of their own.

Instead of being one large interconnected map, however, the game is broken into several stages, and you must beat or exit from the level you are currently beating to backtrack and access those areas. I won’t go on too big of a deviation, but suffice it to say the biggest distinctions for me in a Metroidvania style game is that not only are there areas that are inaccessible outside of special relics, but they must all be on the same map, and there should be some pretty clearly defined role-playing elements.

Odallus: The Dark Call is a little closer to the extremely light RPG mechanics that Castlevania II: Simon’s Quest had, in that there is a merchant you can access by checkpoints in any given level that sells items that can restore your health, or refill your special weapons. You can find heart pieces that expand your life bar, and that’s about the end of those elements. For the most part, this is a loving homage to Castlevania III: Dracula’s Curse in its aesthetic and gameplay. Upon completion of a level, you are shown a side-scrolling map that enables you to select the area you want to venture to next, although the path is very linear save for the aforementioned backtracking.

On to the meat of the game itself. Odallus: The Dark Call is a side-scrolling, 2D action platformer that encourages you to explore its sprawling levels to seek out secrets, often hidden behind breakable walls or locked behind abilities you will discover later on your journey. Your primary weapon is a sword, and you get a few different sub-weapons that you can use to help defeat your enemies and break obstacles in your path. The sub-weapons actually have their own button, and their discovery helps to clean up exactly why the game has the odd control scheme of pressing A to jump, but Y to attack.

Usually, these two buttons are diagonal from each other, or there are multiple buttons for each on modern controllers so you can play a little more customized experience (usually the ability to push ZR for your jump or weapon). The sub-weapon is utilized by pressing the X button, and it feels rather natural after you get used to it, and kind of correlates to the old school Castlevania control scheme of pressing Up and B to use your sub-weapon.

Jumping feels amazing in this game, but one thing that is a little off-putting is how often you must jump to ledges and platforms that are just a little too high, only to hang from the side and pull yourself up. The timing never really feels right for jumping up and attacking an enemy on the platform without taking a hit, and none of the sub-weapons are a good fit for jumping, using the weapon, and then coming back to the platform after you’ve dispatched the enemy.

This is really a minor gripe, but I still have to take a little off from the game to account for this awkward bit of platforming tied in with attacking without suffering damage. It feels very cheap, but most of the game strays away from this territory until you get to the bosses. The bosses are well designed, horrifying, and have very easy to recognize patterns so that you can plot your decisive victory with a little practice.

There are some armor and weapon upgrades to be found in the game, and these are a nice touch for helping you feel like the character doesn’t have a static power level throughout the game, even if they all happen at the same time for everyone. You will still have to develop your jumping skills, and learn your enemy routines to conquer each level, but sometimes it’s nice to have that feeling of having built up your own badass self with all of this trial and error. A few of the sub-weapons you will get are axes that are thrown in a straight line, and the torch that can set your opponents, and breakable bricks on the floor, ablaze.

The relics that act as your permanent power-ups are one of the most enjoyable parts. You get a bracelet that gives you super strength and the ability to push large stones, double jump, water breathing, and a dash ability. While all of these are standard fare for such games, one of the coolest things is the ability to combine your double jump with the dash move, which I’m sure can lead to some amazing speed run style tricks.

The dash move also damages your opponent, so once you get this ability, maybe a little too late in the game, you finally get the ability to better overcome enemies that have the high ground. You can double jump over the top of the platform, and then dash into the enemy immediately. Whether this destroys them outright, or knocks them back to set you up for a killing blow, it is definitely the most satisfying part of the game.

Level design is very well executed here, and you will often find yourself questioning which direction you actually need to go in to reach the end, or discover the secrets. While the game itself has a very linear level structure, the levels themselves feel expansive and the backtracking you do with new power-ups makes the game seem less on-rails, recreating that beloved feeling of exploration and reward for remembering exactly where this new power-up will work best for you.

Unlike the shorter run time that you will find in Oniken: Ultimate Edition, Odallus: The Dark Call has a pretty sizable chunk of content, with a play time that is pretty close to 10 hours if you want to explore every nook and cranny to find everything.

When you’re creating a retro-style game to feed on nostalgia and recreate some of that sometimes seemingly lost magic, it’s important to hit on all of the high notes the inspiration is so well loved for. Odallus: The Dark Call does this in a glorious way, and even makes itself a little bit better for the modern era by having the ability to save and return to the game later, as well as significantly reducing the cheap factor of too-easy deaths to extend a short play time. This is done so well because of the impressive length and amount of content awaiting you. I’d definitely recommend Odallus: The Dark Call for fans of old school Castlevania, and will even find its home with players that have never touched the series.