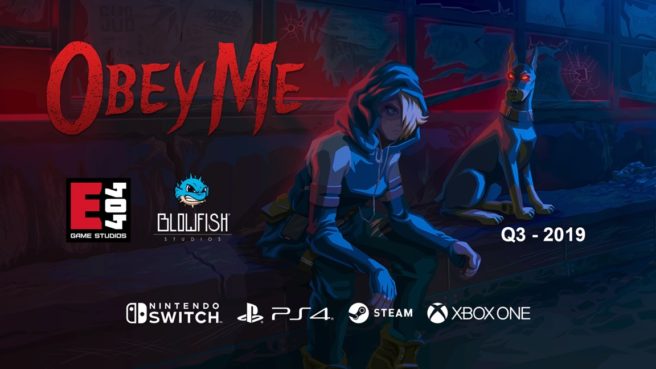 Obey Me Bringing The War Of Angels And Demons To Switch

Who doesn’t love a good old Brawler game? Well, Blowfish Studios has one coming to the Nintendo Switch which, takes place in a war between Angels and Demons. Obey Me follows Vanessa Held as she fights her way through hordes of violent denizens whilst trying to uncover a conspiracy. The top-down co-op Brawler game will be coming to Switch, PS 4, Xbox One and PC sometime in the third quarter of 2019.

We have the official press release below along with an annoucement trailer for the game.

SYDNEY – Jan. 16, 2019 – Obey Me, the cooperative holypunk brawler fromBlowfish Studios and Error 404 Game Studios, fights through hordes of demons onto Nintendo Switch, PlayStation 4, Xbox One, and Windows PC in Q3 2019.
Unbeknownst to humans, angels and demons wage an invisible war, and mankind’s very souls hang in the balance. A former human-turned-lesser-demon named Vanessa Held works for one of these demons: Ammon, the Archduke of Avarice. She’ll fight alongside her Hellhound companion, Monty, against violent denizens from above and below on an unholy quest where she’ll unravel a conspiracy surrounding her.
https://www.youtube.com/watch?v=k-gyGuPQzGk
To survive on these bloody streets, the hellish pair coordinate Vanessa’s savage skills, weaponry and evasive teleportation with Monty’s feral attacks, and magical skills super-powered by his elemental transformations. By absorbing the souls of her fallen foes, Vanessa can upgrade her weapons to learn more vicious combos, as well as upgrading Monty’s transformations.
They can also combine their powers through a Fusion Mode, which merges the pair together to become an avatar of destruction, with the ability to unleash the deadly Soul Overload attack when the Fusion bar is full.
The partnership between Vanessa and Monty forms the dark heart of Obey Me. Solo players control Vanessa and some of Monty’s key actions while an AI takes care of the rest. Alternatively, a partner can control Monty completely for co-op action.
Obey Me’s story of war and conspiracy among Angels and Demons in a decaying world is told not just through the game, but in a series of graphic novels published by Dynamite Comics, featuring art from Marvel veteran Ben Herrera whose resume includes X-Men and Spider-Man covers. Issue #0 releases in March, with five issues to follow. Obey Me comics will be available through both comic shops and digital comic retailers.
“Obey Me’s universe, woven through both a game and comics, intrigued us from the moment we first tried the game out,” said Ben Lee, CEO, Blowfish Studios. “The added depth from the back story provides much higher stakes while fighting against the forces of heaven and hell.”
Obey Me releases for Nintendo Switch, PlayStation 4, Xbox One, and Windows PC in Q3 2019. Blowfish Studios will feature Obey Me at PAX Southbooth 11204, during Jan. 18-20 in San Antonio, TX.