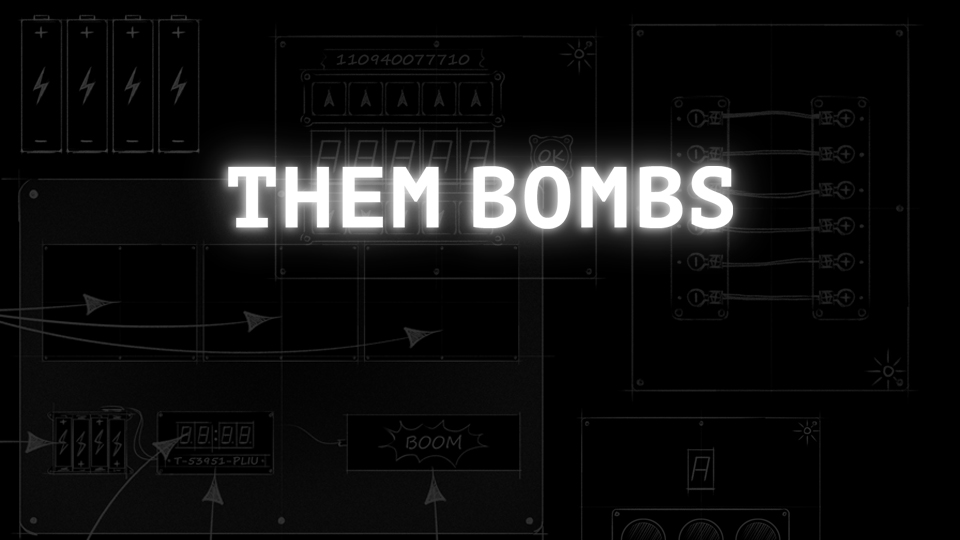 Them Bombs! goes in the same vein to titles like “Keep Talking and Nobody Explodes”, where it places the player in a setting in which they need to defuse a bomb with the help of a team that gives instructions. It’s a simple premise that sets the tone for what the game’s about. It’s tense, stressful, yet it’s still a lot of fun to play.

The main concept is to defuse a bomb; while one player has the bomb the other players have a manual on how to defuse it. Simple as the gameplay may seem, there’s a lot of challenge on defusing it. The details on the manual are precise and one miscalculation can be fatal. The one that holds the bomb cannot see the instructions on the manual, and vice versa. For this reason, it’d be hard to call Them Bombs! a video game, as only one player will be looking at a screen.

The manual is essential when playing the game, you can download the 27 page PDF file on the game’s main site. I recommend printing the file and using it physically as I found that way to be more comfortable. As another recommendation, the game is best played when the Nintendo Switch is in portable mode, as it’s more accessible and faster to interact with the bomb.

In terms of story, Them Bombs! is about how the Unlikely Hero (the only player with the bomb) must defuse it with the help of the Expert Team (those with the instruction manual). The story explains that these bombs were planted in various public spaces by the mad scientist Dr Tint. Sure, the story is minimalistic but effectively gets the job done.

Gameplay wise, the game holds three different difficulty levels. Each one increases the number of modules, the time it takes to defuse, and the level of stress. Once the difficulty is selected, the game starts and the bomb starts ticking. Here, the player with the bomb must start to communicate with the Expert Team and these have to carefully read and give detailed instruction.

The bomb includes three main elements, the modules, the battery and the timer. The battery is only important for some modules, as they require you to know what type of bomb it is. There’s a total of twelve different modules (each one is a different puzzle), each with a unique design that makes them stand out from one another. Now it’s very important not to mess up on these modules, as one wrong move can make the timer’s number drop, leaving the player with a drastic amount of less time.

Regarding the “Stress level,” this is a random event that makes the Unlikely Hero exhausted and here you have to press a button to have him rest. There could also be a moment in which your flashlight runs out of power and you need to recharge it. Personally, I wasn’t fond of this gameplay mechanic as it slowed down the pacing of the game for a few seconds.

It’s fun to discover a new module, as it brings a sense of curiosity on what has to be done, but there’s also a risk when encountering a new module, as figuring what to do may end up taking more time than necessary.

The first encounter with a new module always took longer than those that I was already familiar with. It’s good to mix things up and play with newcomers because even though you’ve already learned the ins and outs of the bomb, the newcomer isn’t familiar with them. Also, when playing this game, be ready for lots of screaming and laughter. The ticking clock is stressful and will get into everyone’s heads.

As far as negatives go, the only real downside to the game, is that after playing this for a good while, you may not end up playing it again until you find someone new to play with. Twelve modules is a lot at first but after some hours, it may end up getting repetitive. I’d love to see more content (modules to be precise) added with updates as that would bring me back to playing the game one more time.

Visually, Them Bombs! is simplistic and presented from a top-down perspective. When holding the console in handheld mode, it somewhat does feel like you’re holding a real-life bomb. As for the bomb itself, it has a 2D vibe to it, as if everything was compressed down into it. I enjoyed seeing the different objects in the game, even though they’re mostly flashing buttons and different colored cables.

Sound design is top notch; the constant beeping from the timer, the different button presses and cutting the wires sound natural to what it would from a real bomb. And when said bomb does go off, the explosion and loud beeping in your ear telling you time is up is unsatisfying, in a good way.

Them Bombs! is a great game to play with friends, there’ll be lots of laughter and screaming, which is what the game’s intended to do. The constant pressure of the ticking bomb makes for some great adrenaline and the modules are interesting enough to keep the game from feeling stale.

It also has a unique take on cooperative gameplay, and it challenges all the participants to communicate and do certain actions in a limited amount of time. On the downside, playing the game various times after already knowing all the modules may make the game feel repetitive. If you want a great co-op experience with friends and family, Them Bombs! Is for you.