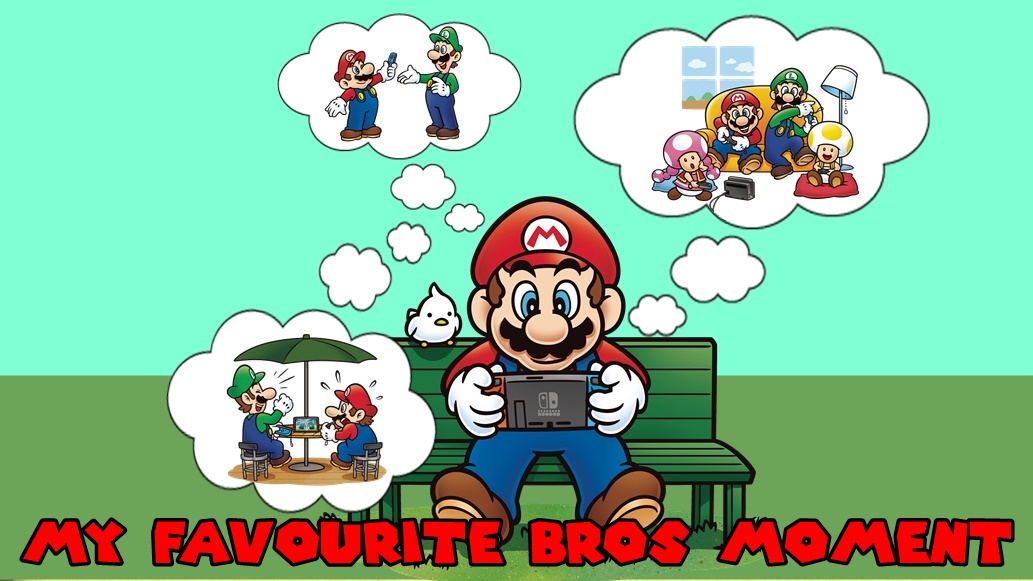 Gaming can bring all kinds of people together. Those that we enjoy to play with most can be considered our gamer bros, be it our actual brothers, sisters, best friends or even the love of our lives. Over this past week, people have sharPlaydius posted a new ten-minute gameplay video for Away: Journey to the Unexpected, which features a mix of adventure action, negotiation and rogue-lite elements. View it below.ed with us their favourite bros moments in celebration of our #BrosWeek theme week. We are touched by the special bond that some people have with their gamer bros. To the point where not even being on opposite ends of the Earth can stop them from enjoying some quality gaming time with each other.

We have compiled all of our participants’ stories below and we wish to thank everyone who took part and all of you for taking the time to read these stories.

The man I was talking to online lived in Puerto Rico and I in Pennsylvania. After getting him up to date on Nintendo I got him to purchase a N3DSXL so we could play Final Fantasy Explorers. After a few months of playing online, he became my boyfriend and my permanent Player 2.

I have 2 moments 1st was with my brother when I was a kid we would spend all night playing double dragon on the NES and my 2nd is completing RES EVIL 4 on the wii from start to finish with @kennysevendaze. Wouldn’t play it without him as we didn’t want to ruin the story. EPIC!

When I was 14 my brother (21) and I spent months playing Mario Kart Double Dash on Game Cube before he went traveling around South Asia for a year. Was great.

My gamer “bro” is my husband now. And although we have 6 kids all together, we are still finding time to game together. Final Fantasy XIV was our game of choice before during my pregnancies with our boys. I miss waiting to queue into dungeons while hubby got me ice cream.

My best memory is always when you play a part of Virtua Tennis 2 on Dreamcast. great moments of fun with this game of tennis. the best. and at 4 it’s even better. we can play there for several hours without ever getting tired. One of the best Party Games.

I have two gamer Bros, we all used to play Smash melee on a crt TV on the GameCube when I was a kid. They aren’t in the house anymore and I’m almost on my way out, but recently we got the chance to play smash ultimate for a few hours just for fun. Pretty cool day.

One of our mates told us he had a nightmare about Mario when he was younger so we dressed up as the entire posse for Halloween. At the party Wario got asked if he was UKIP man or a minion.

My gaming bros were my actual b@rothers and they would always want to watch me play the games instead of play. I remember when I played Chrono Trigger, Earthbound, and Mother 3 they watched me go through the story and we got to talk about the story we all experienced together.

Playing online video games with my girlfriend, @HipCoolMae, is always amazing. Because we live in different countries, this is essentially the next best thing to seeing each other in person. Meeting her in person one day is my dream, and playing games with her warms my heart!

My favourite moment was on my birthday, I was completely blindsided with a gift of a switch as you can see it says Horizon Zero Dawn. He wrapped each item up separately inside the box which included a limited edition Breath of the Wild game I did a massive shocked / happy cry.

Watching in awe as my big bro played Astro Wars. From that moment I knew I wanted to be just like him. Strange for a small child to aspire to become fat and bald but it was a simpler time.

My gamer bro hands-down is my mother. Watching her game makes me smile and vice versa. We are always talking about certain games and working on strategies with each other. It’s nice to be able to make my mother smile and keep tabs with new games coming up. My mom is the best!!!!!

Playing Arms with my bro, while drinking whisky and laughing ourselves silly.

Me and Corey(gamer bro) would have to force ourself to eat because we would spend all day playing pvp in dark souls until we lost a million souls to the damn wyverns!

Me and my cousins always play Smash Bros whenever we have family gatherings and it’s always so much fun. We came up with a game mode we dubbed “The Bomb Game” where you put launch rate all the way up and just have bombs on high spawn. Is good time

Pokemon Clefairy fairy minigame. she was winning and I only had a hit left and I would lose. She’s like”haha I’m going win”She had full health. I gave her a look that said “you’re going down” I remember everything. She got hit lost all her health and I didn’t get hit once. I won!

My gaming Bros do a hang out most Fridays. Last I was able to attend we played a 4 player 20 round game of Super Mario Party and man, did we have laughs. The chaos of 4 player Mario Party still has never gone away and boy do I love it.

My gaming bro is my home girl . We play alot of horror based games together like dead island and dying light (which she can’t handle jump scares lol) and recently I convinced her to play Just Dance on the Switch with me and to my surprise, she really liked it. I will always win though.

My gamer bro is my older brother and my favorite moment was being at our old house playing multiplayer Halo on the first Xbox all day, taking turns about riding the warthogs (vehicles) Switching between that and our PS1 and Gamecube… It was so much fun, we still speak about it.

Street Fighter 2 on SNES. “Bro” was obnoxious, swore nobody could beat him as Chun Li & constantly put down Zangief as worst. As I pulled off a spinning piledriver to finally take him out, he literally ripped power cable out of the wall. 20 yrs later, he swears it never happened.

I remember the joy of going to the arcade with my best friend with excitement running through us to play the new Ms. Pac-Man. Playing it till we ran out of quarters then begging for more  never wanted that night to end.

Back in the Wii days I always invited my cousin over every Friday and Saturday to play Super Smash Bros Brawl. We always use to do “competitive Brawl” and grinded on the story mode on very hard. I had so much laughs and I really liked those days. 🙂

I always used to play Zelda games with my best friend watching by my side, and for some reason, I really fondly remember us having an absolute blast figuring out the Twilight Princess dungeon with the Yetis and the soup. No idea why, just one of those magical gaming moments!

I remember that my brother took my in his car to what looked like a graveyard to pick up a copy of Super Smash Bros. Brawl from somebody

My literal brother and I were playing Pokémon platinum back when it came out and we were both struggling. So to fill up our Pokédex and move past the part we were having trouble with we traded starters just for a little bit of time. Creative use of co-op in a single player game.

My favourite moment with the bros. would be playing super mario world with my mom and dad. For some reason i know every secret in that game and its gotta be all the hours we spent trying to achieve a perfect score without cheats or nintendo powers. It was awesome.

I don’t have any siblings,but my gaming bro @NaughtEwe & me Have been playing games together since the N64s. My favorite gaming moment was teaming up with him on bomberman 64 on our other friend making him so mad he took the game out of the system & threw it over his fence.

I don’t have any gamer Bros who haven’t rage quit mid way through a video game because they can’t beat me.

My gamer bro is my Cousin He’s actually the one who turned me onto a Gamer I wouldn’t have known Super mario or Crash bandicoot without him. Thank you soo much Cousin (:

My gamer bro is my Brother, I really enjoy playing Smash together with him., And when he brought a Friend to Join us It was AWESOME , we enjoyed every moment.