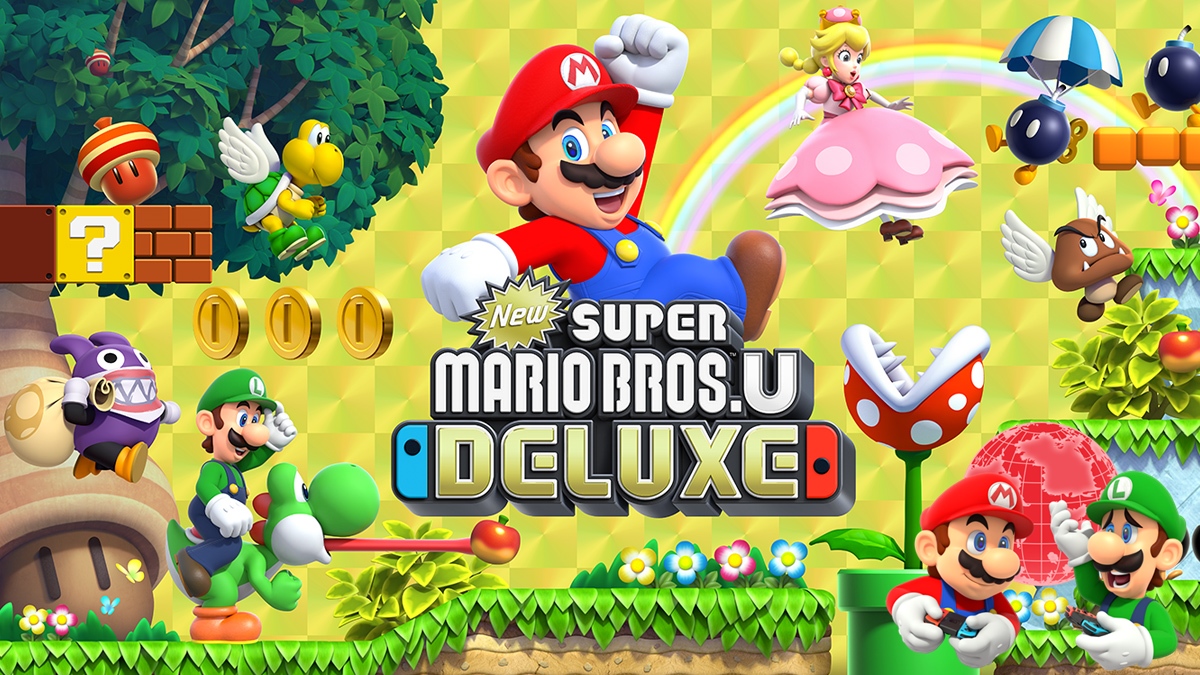 Oi, oi saveloy! Since it is a new year and all that, to kick off #BrosWeek, here at Miketendo64, we’re launching a brand new feature all about ports that are going to be getting the Switch treatment and when we say ports, we mean games like Final Fantasy X and Saints Row: The Third – The Full Package.

Just because these games are not new releases, it doesn’t mean they don’t offer a new experience to those who have never played them before. So, on that reasoning alone, with this new feature, every Switch & Tell article is to be penned by someone who is familiar with the game and tell you guys a bit about it and who knows, maybe we can help you become more passionate about these releases, instead of just writing them off as “just another port.” With that out of the way, let’s talk about Mario.

Back in 2012, New Super Mario Bros. U made its debut as a launch title for the Nintendo Wii U. As the fourth instalment in the New Super Mario Bros. series, it is a 2.5D platformer game that presented the player with so much content that the main campaign features nine worlds and a total of ninety-four levels.

Still, you didn’t come here for statistics, so let’s move on. Although released as New Super Mario Bros. U, it was actually previously revealed as New Super Mario. Mii in 2011, when Nintendo showed tech demos that highlighted the capabilities of the Wii U during the 2011 E3.

During the year of its release, however, other than just being a meaty game in which up came packed with content, up to five players (four using Wii Remotes and one using the Wii U GamePad) could play it together and the game quickly became referred to as being the best New Super Mario Bros. game to date, by games press.

Although they weren’t the only ones singing the game’s praises because it really was a gorgeous title. The worlds were whacky, since the majority of them were based on food, but the actual levels themselves were and still are, a thing of wonder.

From the visuals to soundtrack, power-ups and the gameplay, New Super Mario Bros. U was a pure delight to play and one that you could sink hours into, in a single playthrough. When not playing as Mario, Luigi, Blue Toad and Yellow Toad, however, New Super Mario Bros. U also offered a challenge mode that allowed players to play as their Miis and discover new ways to play the game, thanks to modes such as Time Attack, Coin Collection, 1-Up Rally, Special and Boost Mode.

Only, before players could get too familiar with what New Super Mario Bros. U has to offer them, Nintendo made the 2D adventure even bigger, thanks to the likes of New Super Luigi U. First released as downloadable content in 2013 (and later given a physical release, which has sold 3.04 million pcs. to date,) this new adventure brought with it 82 new courses to replace the original ones, in a separate campaign and it did away with Mario.

Like its title suggests, Luigi was the star of the show in this adventure and because Mario was gone, another playable character was introduced to replace Mario and this character was Nabbit. Unlike the other characters though, while Nabbit can’t benefit from power-ups, he is invulnerable to all enemies, so whoever chose to play as him, would never have to worry about getting in over their head.

What you would have to be aware of though, is the fact that New Super Luigi U is similar to Luigi’s style of gameplay as seen in Super Mario Bros.: The Lost Levels, in the sense that while characters can jump higher and run faster, the levels around them are more challenging and you have less time on the clock (100 seconds) to clear the given level.

In time, both New Super Mario Bros. U and New Super Luigi U would be bundled together as both a physical release and a digital one and this is what brings us to present day. With New Super Mario Bros. U Deluxe, ready and waiting to grace the Nintendo Switch with its presence on January 11, thanks to a worldwide release. It is worth clarifying that though it is a Deluxe game, it’s not necessarily a deluxe port.

Yes, it is true this Deluxe release is both the New Super Mario Bros. U and New Super Luigi U games bundled together again, but the reality of the matter is, Toadette, the Super Crown and Nabbit being playable in Mario’s campaign, are the only real changes the game does feature. Oh, and the removal of Blue Toad.

To make matters worse, like with Donkey Kong Country: Tropical Freeze, which got a Switch release last year, for the Wii U, it and Donkey Kong are both part of the Nintendo Selects range of Wii U games. Unlike Donkey Kong, which can be purchased at the low price of $19.99 compared to $59.99 for Switch, the bundled New Super Mario Bros. U release is only available in Europe.

Essentially, while you can get it for cheap in Europe for €24.99, in the US, the bundle is priced at $59.99, which means if you are in the US, regardless of which platform you get the game for, you will actually have to pay the same amount, only this time, Switch is the winner because it has more content, whereas in Europe, while you can buy two games for €24.99 on the Wii U, you will have to pay considerably more for the minimal additions of one brand new playable character (Toadette) who can turn into Peachette, and more Nabbit.

It is a big difference in price, but there is a reason why the Wii and DS instalments of New Super Mario Bros. sold so well and it’s not just the fact that the platforms they released on, sold more units, but because they are fundamentally brilliant games. I’m not the biggest fan of 2D Mario games, but the simple fact of the matter is, New Super Mario Bros. U Deluxe and all that is contains, is the perfect follow-up to New Super Mario Bros. Wii and is well and truly worth your time and money.

If you already have the Wii U version, there is no pressing need to upgrade to the Switch version as it’s not quite on the same scale as Mario Kart 8 Deluxe, but it is still a fundamentally unmissable 2D Mario game. Sure, it’s a port and an expensive one at that, but the reality is, the game hasn’t dropped in value so there is no need to discount it, but it would have been more appealing if it was.

Essentially, water is wet, 2D Mario is still as godly as ever and thank you for checking out a brand new feature!