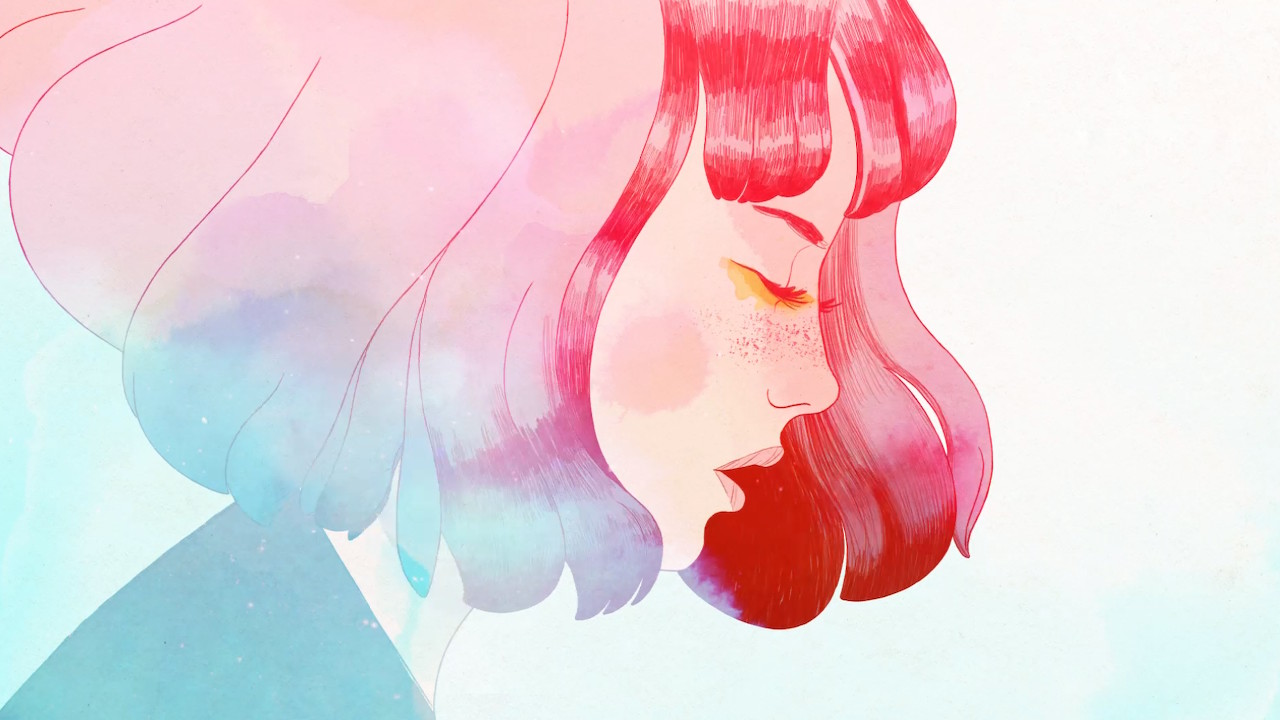 GRIS is Nomada Studio’s first game, and boy did they hit it out of the park on their first try? Publisher Devolver Digital has an artistic masterpiece on their hands which released on various platforms, including the Nintendo Switch this December.

The story of GRIS is somewhat ambiguous and left up to how it can parallel your own story as you play through the game or the story and life of someone close to you. Throughout the 4-5 hours for the main story completion, you will find yourself engaged with the hopeful young girl protagonist as she deals with painful life experiences and journey to overcome and triumph.

GRIS starts you off in a bleak world ruined and ravaged of color and existence. At its core GRIS is a platforming game with light puzzling and action sequences told in a chapter by chapter story through animation and artistic direction that I have never seen or experienced in a video game.

GRIS, is similar in tone and scope, like other indie games, Journey, Inside, Pode, and Limbo, all of which tell their story primarily through environmental cues, musical scores, solemn moments of aloneness and more. This ability to tell a story with very little, yet poignant moments, is akin to the best Pixar or Studio Ghibli movies and how their stories often unfold without much-spoken dialogue.

GRIS has no spoken words in it, aside from some gasps of desperation and bewilderment. This choice is very much a story decision and makes for some of the best moments when you feel isolated and alone working through each area.

There is an emotional connection that can be made, easier in my opinion, when developers chose to actively leave out voicing a character. In my mind, this makes the story and journey in GRIS, something that can become your own story and journey entirely. By the end of the game, you will have felt both the failures and victory of the character moments, which I don’t want to spoil for you.

GRIS is primarily an action platformer when at times you will need to utilize various skills of jumping, shape-shifting into a solid box, swimming and more to work yourself left, right, up and down through the world. The areas of GRIS of broken up into five or six chapters where you’re tasked with collecting small orbs of light, which will later be used to complete constellations which take you to the next area or used to open up areas of the world which allow you to find some hidden collectibles.

Along your journey, you will learn the various abilities which I outline above. These range from shape-shifting into a box which will let you open up new areas of the world by ground slamming through cracked portions of the landscape or architecture. You will learn a double jump which you will use often to jump skilfully through the ruins, treetops, and across the hills of the forest areas.

Later in the game, you will learn to swim and shift in and out of your swimming animation into flipped sections of the game which have you walking on ceilings. Another skill you will learn is the ability to sing which brings color back into the world and revives flowers and plants which can be used as platforms.

GRIS may feel a little light on content for some people hoping to get more than a few short hours of the indie title, but considering that the game is primarily more about the experience you will feel, if you have any kind of soul and tender side, this game is truly memorable and worth supporting. You can beat GRIS in an afternoon, but it is the collectibles that are a little harder to obtain.

They require some backtracking and puzzle solving to acquire and in my first playthrough I only found two or three that were a part of the natural path of the game. The game leads you from point A to B often and doesn’t require to find the collectibles, but completionist may find that revisiting GRIS’ world is well worth the extra time it will take to 100% the game.

The other main ‘character’ of GRIS is its music. The composer for the game has done an amazing job of weaving emotion and heart into each piece of the game’s music and audio. The music is so encapsulating of struggle and triumphs that I have listened to the Spotify album a dozen times since completing the game. The strings and percussion throughout each track are beautifully done and this game needs to be recognized for that when it comes to award season.

Gris is light on audio, as I have said before, the game has very little in terms of speaking. But there are a few moments where the subtle drips of cavern water, or chirps of a small forest dwelling creature and his family, help to elevate the feelings of loneliness and despair. As you jump and swim there are other sounds that just feel right in the gameplay moments.

The chime of gathering a fallen star or the flutter of birds as you burst skyward all add to the game’s tone. I would recommend playing the game with headphones on or in docked mode on a TV with a decent sound system. You will not regret turning the sound up as you play GRIS.

I didn’t encounter any bugs or things I didn’t like regarding the game itself. I would say that for the few short hours it takes to beat the game though, some people may be disappointed. But if you go into playing GRIS knowing that it will be a short, to the point, character revealing (in that it really plays with your emotions as a gamer) and you’re ok with that, you will be delighted with your time with GRIS.

One thing I haven’t mentioned is the games art style, we don’t really have a category for that, but GRIS looks amazing. The game is like playing through a painting or watercolor piece of art. In some settings, you can see the paint fill the pieces of the world. The way color, as it becomes available, overlays and blends are masterful. There is probably no way to describe this beautiful game other than breathtaking.

If you like games like Journey, Limbo, Inside, and similar titles and you like your games short and to the point like a great movie or book, GRIS will delight. If you are the type of person that can emotionally connect with a character’s ups and down. And if you are not afraid to feel, I will tell you I cried a few times while playing this game, GRIS is an experience that every Switch owner needs to have in their game library.